I mentioned back at the end of the Steam Summer Sale, which somehow finished up over a month ago at this point, that I had purchased a few titles. I have played through them all a bit, so it is time to start writing, and the first on the board is The Fermi Paradox.

The basic idea is that you play the hand of fate, the galactic gardener, who helps guide intelligent life along their developmental path with an eye towards them eventually heading to the stars and possibly encountering other civilizations.

You get to influence multiple civilizations in your corner of the galaxy, making choices that influence their advancement or watching them collapse.  The Drake Equation plays into this.

Somebody fell out of the race again…

As you juggle the various budding civilizations, jumping from one to another as significant events occur, you earn “synthesis,” a currency of sorts that you can spend on your decisions, because not all choices are free.  You have often have to spend a bit to get somebody on what seems like the right path.

For example, one of my civs, the Prun, on Gliese, discovered radio. 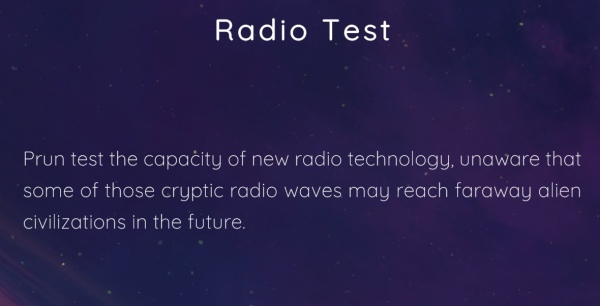 You have to decide where they should go with that.  Do you let it be, push them towards radio silence to avoid stirring up a neighbor that might be hostile, or get them to pump up the volume?  The fist is free, the second earns you some sythesis, while the last will cost.

The radio choices for their civ

I went for the last, deciding that there wasn’t much danger… after all, I know what the other civs are up to… and hoping it might spur another civ to look to the stars.  And then, of course, the Prun disappointed me.  They’re too much like us I guess.

Of course they did

You also get to collect “flares,” which look like little snowflakes on the screen, which are a bit like loot boxes I suppose, except that they don’t cost anything.  These bestow benefits or woes, give you some synthesis or cause some issue.  Some of them have a generic icon, others had indicators as to what they might influence.

So it goes.  You pop back and forth as events happen or new civilizations rise.  And naturally you get humans arising in the Sol system. 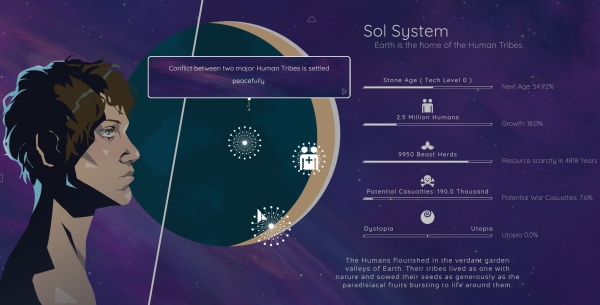 Early human civilization, with some flares to collect

I like the idea of it, and it is in early access… very early, as it just hit that in early July… so I want to give it some benefit of the doubt.  The concept seems like it has something to it.

On the other hand, what is there right now is very light.  If you’re expecting something like RimWorld or any of the Civilization titles, this is nowhere close to that end of the simulation spectrum.  Your choices are quick and general and sometimes go well and other times turn out poorly, but I always felt very much removed from the civilizations I was shepherding.  If somebody goes extinct, well you have some other options.  You root for one group or another, but there isn’t a lot there to get you invested in them.  And they regularly go down paths that you know won’t end well.

Occasionally you make a choice that has a large impact on a civilization, but most of it is light.  The flares give some sense of randomness to it, but there isn’t enough variation in them.  After a while you start seeing patterns and similar trajectories.

After a couple hours of play I wasn’t feeling all that invested in how the various civilizations were moving along.  There is a promise of depth that it cannot quite achieve yet and I felt like I was just clicking on things in a way that wasn’t very satisfying.

Still, I am interested and will keep an eye on it for now.  Maybe some big update to the game will grab me.