Time once again for a look at the New Eden economy as CCP posted the August monthly economic report for EVE Online late last week.

August saw the end of World War Bee.  After the great PAPI summer lull, when the told line members to take some time off and we saw daily activity follow them out of the game, the coalition announced a final push against the Imperium, threw some subcaps against 1DQ1-A, then promptly began their retreat from Delve.

From there it was a time to clean up and return to normalcy, or something like it.  So let’s go through the usual categories and see what happened in August.

While the final battle in 1DQ1-A resulted in a mere 340 billion ISK in destruction, blowing up the many PAPI structures left over in the region boosted the destroyed amount, putting Delve at the top of the region list once again.

You can see the effects of some of the clean up in Querious and the cyno beacon trap in Catch that added to the 36 trillion ISK in destruction that took place in August.  That was up 9 trillion from July.  With the war over, I expect we will see that number dip once more with the September MER.

The end of the war saw a bit of a boost in production as well as parties settled down and began rebuilding for the next war.

August 2021 – Production vs Destruction vs Mined

You can see the red line pulling upward again after having dropped off in April with the industry changes.  Overall a total of 94 trillion in ISK value was produced, up almost 13 trillion from July.  The top regions were:

The regions feeding Jita, The Forge, The Citadel, and Lonetrek, dominate still, but Delve managed to clinch second place as the Imperium ramped up production to rebuild the region shattered by the war.

That would have seemed like a big change in past eras, but after the starvation spike it feels like a normal fluctuation.  A total of 21.95 trillion in ore was mined, up about 1.5 trillion from July, with the top regions being:

Delve was down in 14th position, which isn’t bad considering the need to install moon mining structures and the need to raise ADMs to get upgrades so that mining anomalies would spawn.  I expect that we will see Delve in the top five for September and that overall mining value will go up with the changes we saw in last week’s update, where ice availability was doubled and Mercoxit spawns were increased.  That is the first step away from CCP’s economic starvation plan.

The market also saw a jump in August.  I am sure all those players trying to buy fuel to move their capital ships added to that number.  There was a total of 647 trillion in transaction recorded, up from 513 trillion in July.  That is quite a significant rebound.

The top regions were:

All of those regions, save for Heimatar, were up, with the top three being up significantly as the economy shifted back into gear after the early summer slump.

I have left the most interesting for last and we might as well get right to the Redeemed ISK Token entry.  Last month that line on the faucets chart spiked dramatically as CCP handed out 235 million ISK in login rewards to players with Omega accounts.  The main spike finished in August and then fell off as the month carried on.

The sudden prominence of that line last month led some to believe that it only tracked the ISK tokens that were redeemed as part of the login event, myself included.

Following that logic, with the event over and most of the redemption likely concluded, the assumption was that the 25,869,509,165,000.00 ISK that line represented in July and August could be neatly divided by 235 million to give us a minimum number of Omega accounts active in EVE Online.

That gives you a minimum of 110,000 subscribers to the game.

However, nothing is ever that easy.  That Redeemed ISK Token line runs back into 2020 on the chart, and while it isn’t significant amount, it does mean that it isn’t all from that one event.  The Nosy Gamer did some research on that line item.  The upshot is that there are other things that feed into that line.  I pulled the data from the source file in the MER and found that from July 1st through July 26th, that line accounted for close to 20 billion ISK in payouts before the login event occurred.  That isn’t a lot relative to the trillions that the event adds in, but it isn’t nothing either.

Still, that 110,000 floor for subscribers seems to be fairly solid.  While a far cry from the 400K subscriber count the company was reporting in 2012, relative to titles of its age not named World of Warcraft, the game is doing pretty well.  The list of aging MMOs that would like to have 110K paying subscribers is pretty long.

Otherwise the faucets were the usual suspects.

You can see that commodities are still in the top position, with bounty prizes lagging behind as has been the case for the last year or so.  Overall bounties were up by about 4.5 trillion ISK, with a total of 29.14 trillion ISK being collected.  But if you look at the sinks and faucets over time chart above, which shows daily activity, you will see bounties making a surge towards the end of the month as people settled into a more normal peacetime roles.

It is very possible, given that trend, that we might see bounties back on top as the primary ISK faucet come September.

As for where bounties are coming from, these were the top ten regions:

Fraternity is still leading the way on NPC bounties, but Delve surged back on the list in the the back half of the month as work on raising ADMs continued.  Delve could climb back to the top of the list, though Fraternity’s diverse holdings will likely still add up to more ISK income over time.

And, finally, on the commodities front, one of the big questions was whether or not that estimated 20 trillion ISK sitting in ESS reserve banks would suddenly be let loose on the New Eden economy.  The chart says… not so much. 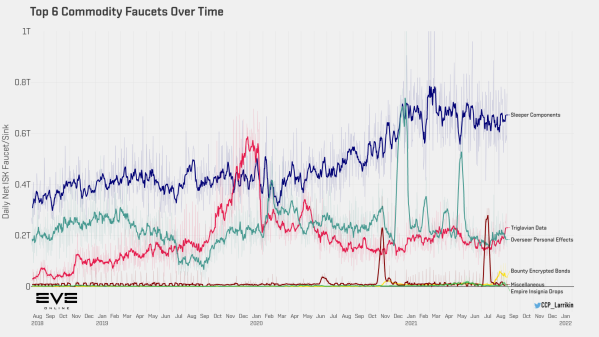 While looking at the yellow line clearly shows an uptick in redemption of the encrypted bonds that both ESS banks and reserve banks yield when you rob them, relative to other commodities it wasn’t a huge impact.

Of course there have been ongoing issues getting the actual reserve bank keys, the fact that reserve banks have been “nationalized” in a number of regions, and the rather slow payout mechanism involved with robbing reserve banks that keep that number from suddenly jumping into the trillions.

Something to keep an eye on as time goes by.

Other items of note, going back up to the sinks and faucets line chart, you can see the brokers fee and transaction tax changes that CCP put in place reflected in the chart as well as a rise in the asset safety recover tax as people get their stuff out of hock after the war.

That is all I have for August.  As always you can find all the charts and data at the dev blog for the MER.