The war is over and most groups are back in their homes… old or new… and working on building up for the next struggle.  Out in Delve we have Ansiblex jump gates again and an industrial infrastructure in progress and ADMs on the rise.

But there are still some details to take care of.  While most of the PAPI structures have been cleared out, a Keepstar was still hanging on in Catch, in U-QVWD.  That might have been the most reinforced structure of the war.  The Initiative went after it many times, but it was a key waypoint on the capital highway to the east, so PAPI forces kept showing up to defend it even when they were not doing much in Delve proper.

But Monday night late USTZ the final timer was coming up for it.  The question was whether or not TEST or PAPI would put any effort into defending it one more time.  It was far from Outer Passage, but not impossible to get to.

The Imperium was not going to take any chances.  Capitals moved out the day before and as tht timer counted down subcap fleets were formed up and sent to Catch.  After all, who doesn’t want to get on a Keepstar kill?

There was even some chatter about Pandemic Horde doing a flash form and maybe coming our way.  But nothing came of it.  The joke went around that they accidentally jumped to the bait beacon in UQ-PWD like so many of their comrades before.

I had a jump clone and a couple of ships over in Curse in an NPC station just a couple of jumps away, so I grabbed an Ishtar I had sitting around and joined in to watch the fun.

I have been a bit under the weather and wasn’t feeling up to being in main fleet, so I did this on my own.  I waited until the Keepstar was down to about 15% then warped in range and took a few distant pot shots at it.  I scored no hits, but you get credit for trying.

The Keep exploded soon there after. 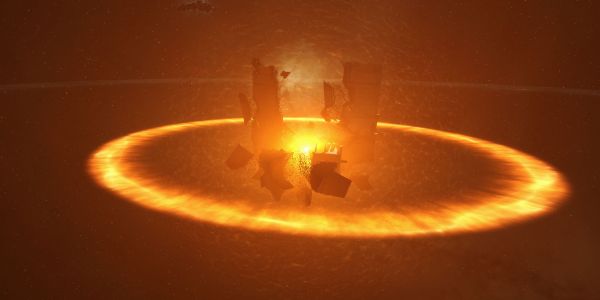 Another one bites the dust

I made it on the kill mail with about 800 of my fellow Imperium pilots.

GSOL, well practiced at this now, swooped in and grabbed the core then salvaged the wreck.

There is another TEST Keepstar in 0SHT-A, one gate over in Curse.  I am sure that will be next on the list.