CCP was out early this month, getting the September MER posted before the end of the first full week.

Unfortunately we have another MER with a missing region, and I don’t just mean Pochven, which has yet to make the cut.  This time around Period Basis did not get included.  Regions have gone missing in the report in the past and that is apparently a small enough error in CCP’s eyes that they won’t bother with a revision.  Period Basis isn’t a huge region, so its absence won’t tilt the numbers dramatically.  Just know that it isn’t there.

I expect that we will see Delve in the top five for September and that overall mining value will go up with the changes we saw in last week’s update, where ice availability was doubled and Mercoxit spawns were increased.

-From my August MER Review

I made that minor prediction last month and it seems to have come to pass.  It is nice to be right now and then, even with a gimme prediction.

When it comes to the most productive regions, Delve did indeed bubble up into the top five as expected, landing in the number two position.

The odd one on the list is Genesis, an empire region with a mix of high and low sec systems.  According to Reddit, Dock Workers and some allies are setting up a mining empire there.  But overall null sec regions now represent half the list, a change from June 2020 after the big mining nerf, when 9 of the 10 top regions were high sec.

Meanwhile, mineral prices kept to their decline, no doubt helps along with the boost in Mercoxit spawns which should have helped the morphite shortage.

Since the value of minerals mined is a function of the market price, 30 trillion ISK in ore mined in September is still less ore than 30 trillion ISK mined two years back when the price was very low.  We will see if the increased output can keep pace with the falling prices.

Things still have not kicked up much on the production front since the big industry changes back in April.  It still doesn’t make sense to produce many of the ships whose requirements were changed, capital ships especially, so most people are getting by on what they had before the update. 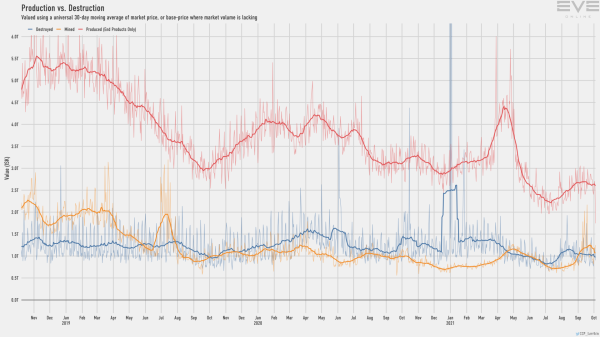 September 2021 – Production vs Destruction vs Mined

There was a bit of a post-change surge as it looked like there was going to be an epic end battle to the war, and that has carried on somewhat with the Imperium rebuilding its regions while Brave and TEST try to settle down into new space far from Delve.

CCP showed production value overall at 101.98 trillion ISK, up about 5 trillion over August.  I expect that might settle down a bit once the post-war rebuilding effort cools off.

The top regions for production in September were:

As always, The Forge, Lonetrek, and The Citadel all feed the Jita market and are always in the top five.  Delve was up slightly in amount, but otherwise stuck in second place due to the rebuilding effort in the region.

The was was over in August, but there was still plenty of cleanup work going on… I was on two Keepstar kills in September… the war was mostly over and so the destruction level started to trend down a bit, dropping to 31.41 trillion ISK, about 5 trillion down from August.  The top regions were:

The Citadel is up top, being home to Uedama, the favored ganking choke point in high sec since the Trigalvians took Niarja away from us last year.  It is the place where Catalyst destroyers blow up.

According to the data in the MER, 55.8% of all Catalysts that died in EVE in September with a player on the killmail did so in Uedama. And on 34.8% of those killmails, GSF pilots got the final blow. #tweetfleet

Vale of the Silent is home to a low grade conflict, while The Forge was more ganks.

Delve is on the list, mostly due to remaining clean up and an opportunistic period during the rebuild.  You have to hold the ihub in a system for 35 days before you can start putting up Ansiblex jump gates.  Once up, travel becomes considerably safer.  During the wait for that a few groups took advantage of people gating for travel and got in some kills.

ISK keeps New Eden going, but trade was down a bit in September, ringing in at a 607 trillion ISK total, down  40 trillion from August.  The top regions for trade were:

Those are the same ten regions in the same order as August, so things have carried on as before.  Some were down a bit, a few were up, but it was mostly the same.

And then there is where the money all comes from.

That is hard to read, I know, even if you view it full size.  Somebody at CCP has much better eyes than mine if they’re making charts with such tiny print. 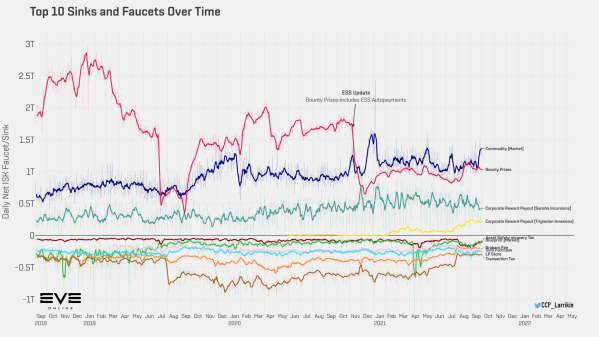 Going into September NPC bounties and commodities were running neck and neck, and then CCP had an in-game event and commodities saw a spike as people turned in their drops.

Missing from that top ten chart are Redeemed ISK Tokens, which saw a huge spike previously, enough for that to break into the chart, knocking blueprints off the list.  Well, now that most people have redeemed their tokens, it is off and blueprints are back on.  I guess that means the chart isn’t really the “top ten sinks and faucets over time” but “this months top ten sinks and faucets and their three year history.”

For commodities, you can see how they are broken out on this chart.

The event items fell into the Overseer’s Personal Effects line, boosting that up as the month closed out.  Triglavian Data, which are drops from Abyssal Pockets, fell off a bit during that as people swapped to the more lucrative event path.

As for NPC bounties, Delve continued its come back, topping the list for September.

The null sec blocs are back to crabbing to prepare for the next big war.  It is the necessary prerequisite if your going to burn trillions of ISK a month in a campaign.