The group got together again on Saturday afternoon.  Having previously rescued Deckard Cain, we were ready to press on into the back half of Act I.

The rest of Act I involves pressing forward through the darkness, though it is sometimes darker and sometimes lighter.  There is some sort of day/night cycle going on in the game that I never really noticed when I was playing it back in the day. High resolution betrays many details, like all the potions stored in Akara’s tent in the rogue encampment.

Can I just swipe one while she isn’t looking?

We were also becoming a small army as we swarmed across the countryside.  Kevin’s skeletons, Ulfar’s hounds, and everybody with a rogue archer tagging along.  As I said previously, one of the game’s repeated “gotcha” attempts is to suddenly come at you with a half a dozen mobs out of the dark.  But when there are 16 of you in the group, the attacker’s numbers don’t carry that much weight.  Even the carver camps, with a couple dozen little demons running around and their shaman ressing them up, fell pretty easily to us, though I always run in and knock down the shaman as soon as I can.

The game is supposed to dial up the difficulty with each player, but we seemed to be enough to overwhelm it.  I thought maybe we might face a bit of difficulty in the Black Marsh facing the Countess down in basement of the dark tower.  That is one of the first big fights where things can really get our of hand if you’re not careful.  Instead we found her and burned her down pretty quickly, clearing out the whole bottom floor.

The Countess now counts for less

I also kind of have to slow my own roll a bit.  The group game is different from solo, and I have mostly played solo when I have played over the last 18 years or so.  That has ingrained a few habits, like a tendency to run all over creation when looking for things and a discerning eye for what things I care to pick up.  Diablo games are all about the drops, but it rains so much stuff so often that have developed a sense of what vendor well, what is for my class, and what I need to hoard for later… the latter being gems, jewels, charms and runes.  And gold.  Always gold, which the game nicely auto-splits among your party.  My ability to savor the loot pile has atrophied over the years and now we have a group, and for some of us this is a fresh experience, so I have to remember to stop and identify the magic items.

And keeping track of each other was getting to be a bit of a chore.  As we made our way into the monastery and down into the jail levels, it became a bit too easy for everybody to run off in a different direction.  Fortunately, some digging through the options… which I hadn’t even considered because I guess I have just been playing default settings and solo for all these years… found the setting that shows everybody else on the map.

Everybody on the map… look at all of us

They also have different map placement options, including upper corner mini-map, though I stayed with the traditional overlay.

We made our way through the jail levels below the monastery, picking up the waypoint as we went.  I tend to obsess a bit about finding the waypoints. 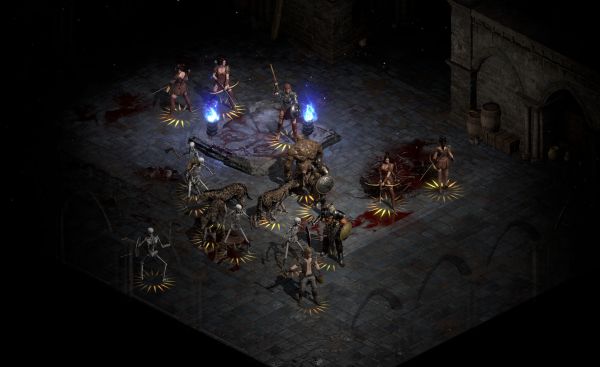 Our army secures another waypoint

Then it was up to the inner cloister… another waypoint… and into the catacombs.  We seemed to be making good time, though we also seemed to be getting map layouts that put the entrances and exits close together.

We made our way down and I prematurely announced we were close when we hit level 3, only to be reminded that there were four levels.  And once we were on the fourth level I announced Andariel was behind the first door and then remembered there was actually a second door.  But we found her eventually and had a short sharp fight.

Solo she can be a bit of a chore and I habitually leave a town portal up by the stairs out in order to escape back to town.  He poison can bring you down and she hits hard, but with four of us… and all the hired help, she did not last long.

Andariel goes up in flames

I later looked her up and she is especially susceptible to fire, which Ulfar was dropping in great quantities during the fight, so that probably helped speed things along.

Once we cleaned up the few remaining mobs it was time to go through the loot pile and haul back likely items.

Then it was back to town to sort things out, get the congratulations of everybody in the rogue encampment, and finally to speak to Warriv to travel to Act II. 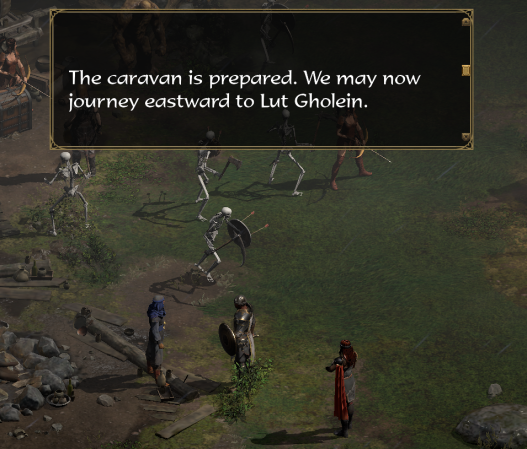 The caravan is ready

I also found a setting in the game options to make all the text larger.  That helps with my aging eyesight and the high resolution monitor.  We made the trip to Lut Gholein.

Town in the desert

We were all level 15 and ready for adventures in a new environment.