When last we left off the group  was headed into Act II of the game. 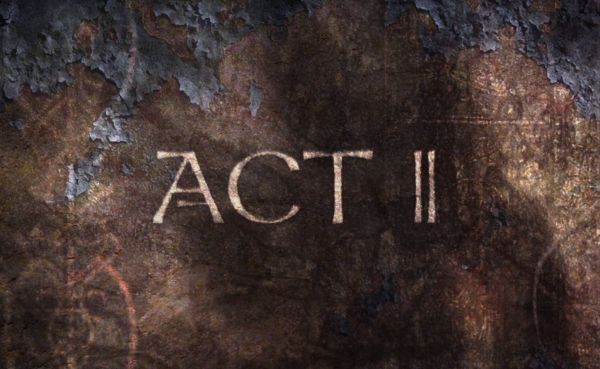 In case you were confused

We landed in Lut Gholein and ran about to get the measure of the place.

I always favor Act II.  The first act feels like a warm up, which it is naturally enough.  It has the mood of the original Diablo and felt very familiar when the game first launched.  The second act is where the game starts to come together with me, where it shows it can be different and better.

It is also a change up from the brooding darkness of the first act… at least some of the time.  When you’re out in the desert and the sun is up… again, there is a day/night cycle that I haven’t quite figured out yet… and sabrecats or leapers are chasing you around it feels like a different game.

There was also the option of some new mercenaries.

Ulfar and I opted to trade in our rogue archers… and I forgot to reclaim that nice bow I had given mine, but all loot is transitory in life I guess… for a couple of the polearm wielding local mercenaries.  They also have the advantage of having auras.  I opted for one with the prayer aura, which heals a bit, while Ulfar went with the defiance aura, which gives a boost to defense.

I couldn’t recall if the auras overlapped, and being a paladin favoring the might aura to boost Kevin’s skeleton army, we were going to have three running potentially.  But once we got out of town by dropping down into the sewers for the first quest, the aura effects at our feet showed we were getting multiple effects. 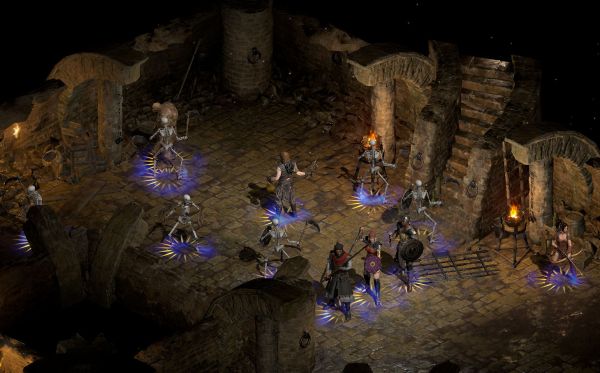 Down into the sewers via the trap door

The various guides to the game always seem to point out that going into the sewers to chase down Radament is optional and that act can be completed without doing so, but I always do it.  Act II flies by so fast that it feels like a positive to spend a bit more time there.

Having gone down the trap door into the sewers, we ended up having to explore a bit more to find the steps down to the second level.

We also started running into some narrow passages, which become more common ac the act goes along.  As a solo character these can often be useful to channel a group of mobs down to single file so you can dispatch them one by one.  With a mass of followers along though it can be a bit of a pain.  Getting your followers through and into a fight can take a bit of finesse and you start to learn about collision.  You can run through your followers, but no hostile mobs or other players.  Your followers, however, have collision among themselves, so you often have to lure them through a narrow bit in order to get your skeleton army into action.

We pressed on, found the third level and eventually bumped into Radament, who obliged us by being in a bit of an open area, so we were able to storm in and attack on a broad front to take him down. 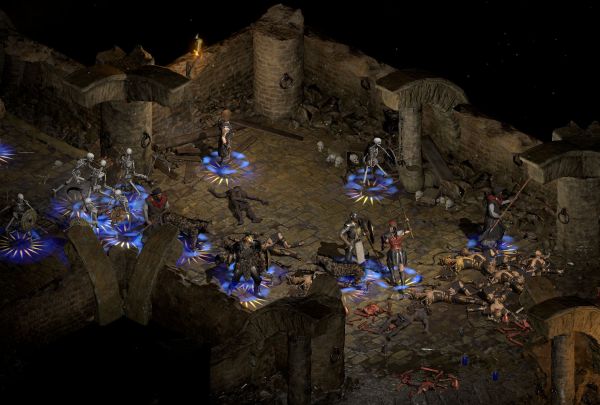 You can also see three auras at our feet in that screen shot, if you look close.

Radament done in, we returned to town for congratulations and our rewards, which is that the merchants in town won’t gouge you for things quite as hard.  A price break is always appreciated I guess.

Then it was out into the desert, which I always find fun.  The wide open spaces suited out group and followers and hangers on, which began to increase.  Kevin had leveled up enough to add some more skeletons to his entourage, while Ulfar found he found summon two ravens in addition to his three wolves… I think the hawk helm he got as a drop added that as a bonus… plus an orange, glowy, floating squid that did a bit of healing if I understood him correctly.

By the stash with wolves and the squid

We were also starting to look pretty smart as our armor got upgraded.  That your look changed with your armor choices was kind of a big deal back in 2000 and I am glad to see that they really honed in on that with the remaster.  Our characters look a bit careworn and aged in the select screen, but the gear helps hide that.

Anyway, we scoured the desert looking for our first goal, the Halls of the Dead, which is in the Dry Hills, the second desert zone.  We gabbed the waypoint, then found the dungeon.

As a dungeon it is nice and dark, but not that big and, while segmented into rooms, they are all wide enough to bring an army to bear on the hostiles, which served us well.

It is also the place where you find that most important piece of the game, the Horadric Cube.  After the big boss fight in the Halls of the Dead we ended up with four of them on the floor to loot.

Loot all over the place

I was wondering how that would work out with four of us.  It had been so long since I played with a group that I couldn’t remember, and in Act I there is a scroll drop that gives you the Carin Stone sequence, but you only get one of those among the group.  But here four cubes dropped, so we all got to pick one up.

Then it was back to town and time to explain a bit of the cube.  As Kevin summed it up, it is a bit like the crafting table in Minecraft. It does a whole bunch of things.

That secured in our stash, along with all of our loose coins, we headed back out to the Dry Hills and in search of the Far Oasis, where the next dungeon lay.

Once again, the wide open spaces lent themselves to a group that seemed to like to spread out.  We got a bit spread out, but nobody got into too much trouble.  There was yet another waypoint to be found, and then the next dungeon, the Maggot Lair.

Into the Maggot Lair

The Maggot Lair is neat because it has a very different look and feel than anything you have run into so far in the game.

It is also a challenge.  Playing through solo with my necromancer this was easily the slowest dungeon run of the game.  Remember up above where I wrote of narrow paths and collision in the sewers?  That was but a taste of the Maggot Lair.

As a dungeon it is made up of a series of single file tubes with rooms or intersections along the way.  Getting into the tube in the right order can be a bit critical, and your followers, who have their own collision properties to work through, can be a pain to get where they need to be. 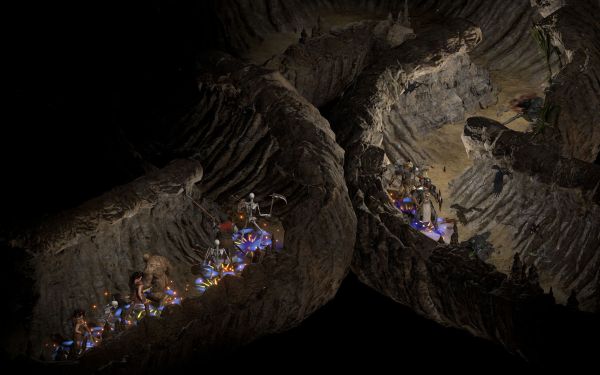 Making our way through

In that screen shot above you can see Ulfar and I on the right, way ahead of the followers, though close enough to get auras, which are stuck in order because Kevin is back a ways and our followers cannot get past his followers.

The optimal ordering seemed to be to get me, the paladin, out in front, with Talon behind me with her spear.  She had the reach to attack with her spear from behind me.  Then Ulfar behind her ready to launch molten fire past us into mobs.  And, in the back, Kevin and the follower armor, ready to spill into any room or intersection when we had the chance. 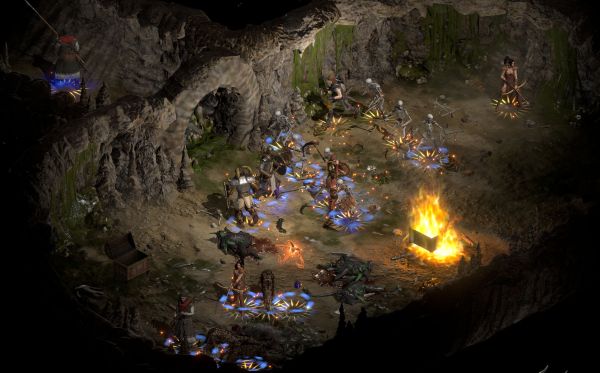 Things working to plan for once

That was the ideal.  We often ended up stuck between people, or Kevin out in front and me in the back, unable to swap order without finding a room or an intersection.  And we kept leaving followers all over the place. 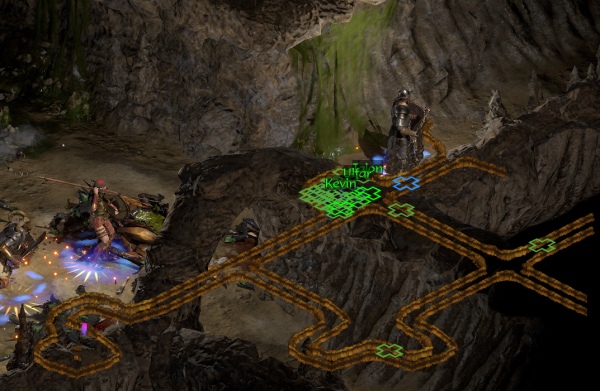 Followers left about the map

Still, we managed to muddle through and, once we found the final boss room, opened up a portal in the tube and went back to town, stocked up on supplies, the arranged ourselves in the optimum order to be able to storm the boss.

It went well, even if there were a lot of disgusting squelching sounds along the way.  It is that kind of place. 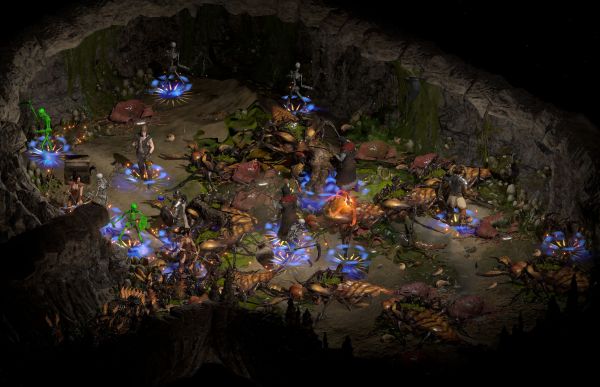 The room after the fight

That gave us each our next piece of the quest chain, the head piece to the staff of kings.

Then it was back to town to sell loot, repair, and resupply.  Along the way Ulfar traded in his hawk helm for a goat horned helm that looked pretty special.  All of our looks were still getting better, save for possibly Kevin, who was still a bit of the aging rocker in aspect. 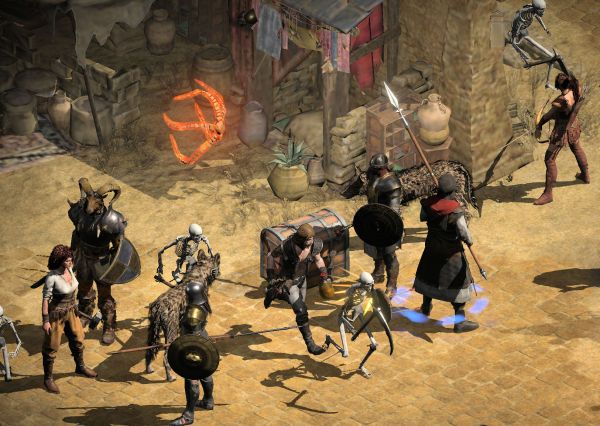 The four of us in town, plus the squid again

That is a lot better looking that the original graphics, which the game lets you peek at. 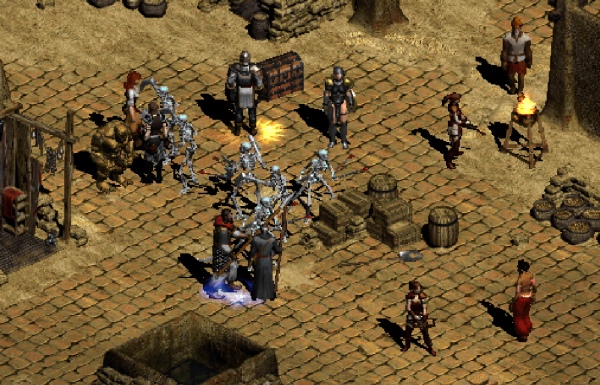 The funny thing is that my brain by this point has accepted the graphical update as the actual game.  As I play through now it feels like it has always been this way, that it is the natural order of things, the way it should be.  I guess I have to give some credit to Vicarious Visions, who did the remaster, some credit for that.  It all feels like the real deal to me and I am a bit shocked at how primitive it used to look.

Anyway, that was all we had in us for the afternoon.  The rest of Act II awaits.

1 thought on “The Group Ventures Out from Lut Gholein”