For whatever reason the announcement of the Visions of Vetrovia expansion for EverQuest II and the pre-expansion events got me stirred up and in the mood to go back to visit post-cataclysm Norrath.

I got in there and did the warm up quests, earned yet another currency for yet another vendor… I don’t think I have ever stopped to explore the number of currencies that game has accrued, but it is a substantial number… bought myself a jaunty pirate hat with a hope that it would make me look at least a bit like a pirate you’ve heard of… and then sort of ran out of steam.

All of which took me about two days, by which time I had pirate hats on five of my level cap characters.

All dressed up and no place to go really

Fortunately, there was still the annual Panda event to run, though I am beginning to suspect that the change over from “Days of Summer” name for the event might have been a bit last minute, given that the quest rewards still say the latter. 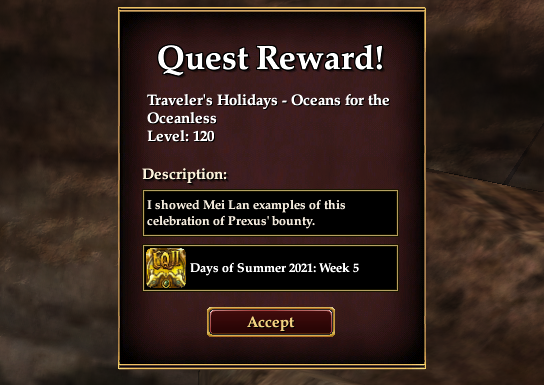 It must still be summer somewhere

The event isn’t exactly a huge effort.  It involves a weekly quest that sends you out to various location in Norrath in order to fetch a few things for Mei Lan.

In order to prolong the experience I decided to travel the old fashioned way… not that spires and bells transport system is all that slow, but it isn’t quite so direct as the map travel that subscribers get… and to make a serious effort not to look up any of the quests until I had least put in some serious effort into figuring them out on my own.

That mean a lot of flying about old zones, which is a bit like a walk down memory lane.

As for the quests, well, I did okay.

Each week points to a specific zone and you have to go find three different things to complete the quest.  Most weeks I was able to get two pretty easily based on the quest details, but the third seemed to elude me.  A couple of times there was no real indication as to where that third item might be in the zone.  One time, in the Enchanted Lands, there was a clue in the name, but it was a name that corresponded to five locations, four of which I knew.  Failing with those I looked up the quest and found the fifth location… just a stone’s throw from the spires where I entered the zone.

Too many things named after Seamist around here

This week’s quest sent me off to Lavastorm, an original launch zone that was pretty fearsome back in the day, when the game was trying to make it clear that you shouldn’t be wandering out alone past level 20 or so. 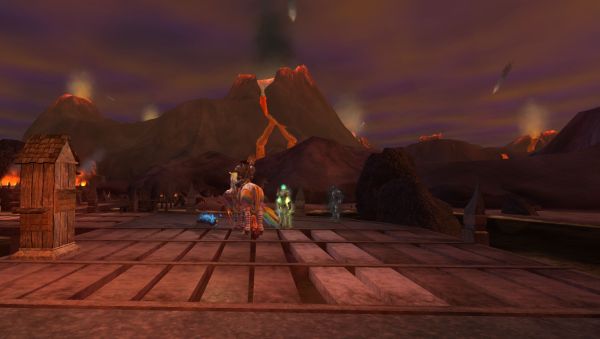 The name is no lie, there is lava out there

But the quest clues for the zone were right on the money this time.  I was able to find them all without resorting to the web… which is probably a pretty low bar, but I’ll take what I can get.

These places are all on the map even

I collected all the items as well as picking up a few sparklies along the way, then headed back to the Sundered Frontier to turn in the quest to Mei Lan.  There we exchanged the usual end of quest banter that is almost, but not quite, humorous.

He is a bit of a literalist at times

That has a couple more weeks to play out, after which it will likely be time for the new expansion.  I am still thinking about jumping in to play it.  We’ll see how I feel when the date is closer.