Having caught Palkia and dealt with the Team Galactic menace, it was time to challenge with the Sinnoh Pokemon League.  That was always the end game in what I guess might be the “classic” era of the core Pokemon RPG games.  That got changed a bit in Pokemon Black & White, but there is almost always a way to become the champion in the local region.

Shining Pearl – The Retro Remake we had been Waiting For

First things first though, I had to defeat the final gym in Sunnyshore City.  There Volkner runs the gym, which specialized in electric Pokemon.  While I had left behind a Graveler, which would have been an ideal Pokemon in my lineup, my current crew was enough to find the way through the maze of his gym and defeat him.  That got me the Beacon Badge for the gym and unlocked the final travel move for me. 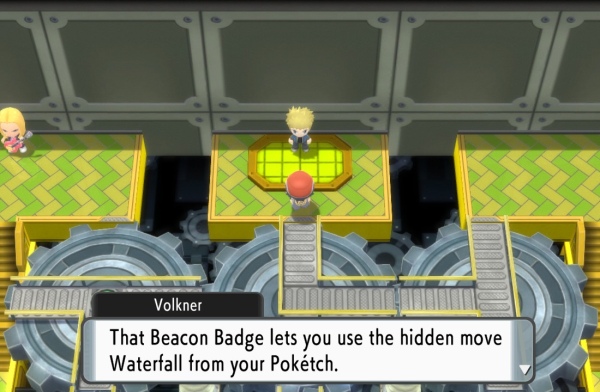 That gave me all eight moves, most of which you need to then make your way to the Pokemon League, which is a trip on its own.

All eight moves in my Poketech

The trip to the Pokemon League took a bit.  It is over water, then underground, then over water some more, and finally up a waterfall… that last move lets you ride up one… before I arrived at the league.

Having made the journey once, you are able to fly there directly going forward, though there are things hidden along the way that you might want to go back and pick up once you’ve made the trip once.

Of course, your rival is up there, so you have to battle with him once more.

He is the most good natured rival of the series I think.  He is just keen to get out and conquer the world.  But once you beat him you are left to face the Pokemon League, where you have to take on five successive battles against the Elite Four and then the Champion.  They are:

The types are more of a suggestion than a rule.  As with some of the gym leaders, they slip in things that can use, say, fire type moves, but which are not fire type Pokemon.

While you cannot leave the challenge between battles, you can stop to apply potions and such. So I had spent some time at the resort outside Pastoria City where you can battle the rich patrons daily, doubling my take by making sure I had a Pokemon with the Amulet Coin in each fight.  I built up a war chest of coins to lay in a supply of heals and revives and other items I might need.

And then, once supplied, there was nothing for it but to go give it a try.  My lineup for the first run was:

Crew for the First Run

And, I did not do so badly.  Bertha’s ground Pokemon took me a while to get through, which was a bit of a surprise due to my having two water types in the mix, but that was what I said about the types they favor not making up their whole teams.

Honestly, I was a bit surprised I made it all the way through to Cynthia, having gone in without much of a plan.  I didn’t even have some of my Pokemon holding items.  I started in on what became almost an hour long battle.  I had a lot of trouble with her Gastrodon, a water/ground type that I did not have a good handle on.  But she didn’t have anything too strong that I couldn’t counter, so there were lots of swaps and I tossed out quite a few potions and not a few revives.

It seemed like I was finally getting the upper hand, though I had clearly not purchased enough potions, when Cynthia brought out her big gun, the Garchomp.  That proceeded to one-shot my team until it was all over.

Garchomp takes me down

At that point you lose 8K in coins and you’re sent back to the Pokecenter to revive your team.

Well, at least I knew what I was facing now.

There are essentially two ways to beat the Pokemon League.  You can assemble just the right team of the right types with the right moves that can handle every Pokemon that will get thrown at you, or you can just level you Pokemon up to the point where they can handle it.

Cythnia’s team was in the low 60s for levels, but that Garchomp was level 66, which put him a couple levels above my highest.

I didn’t think I necessarily had a bad lineup, so my first plan was to make sure I had the right moves for the fight.  Also, I went to earn some more coins so I could fill up my bag with more heals.

So back I went for a second run with the same lineup, just a little more prepared and with a couple more levels.

Back for the second run

And the story was about the same.  I struggled with Bertha a bit, but got past here, then, once I got to Cynthia things slowed down.

The battle wasn’t as long, but it ended the same way; once Garchomp was set loose on me, he proceeded to eat my party, sending me packing.

I decided that perhaps I needed to change my lineup a bit to take on Cynthia, as her Garchomp was killing me.  I needed something that would be able to stand up to it.

In searching the web I found a couple of recommendation, the easiest of which to obtain was a Weavile.  I had seen some level 50 Sneasels in the underground, which evolve into Weavile.  Catching one wasn’t too tough, but actually evolving it took another search.  To get it to evolve you need to give it the razor claw item to hold and have it level up at night local time, which starts at 8pm.

I actually missed the 8pm part of the description, so leveled him up twice before checking on the time requirement.  But the third time was a charm.

Having evolved him and gotten him the Ice Beam move that was supposed to be a Garchomp killer, I needed to level him up a bit as he was still in the low 50s.

I started by doing random encounters along the route to the final four, but that was kind of slow going.  So I went back to the Pokemon League, because one of the best ways to gain experience to level up your Pokemon is to battle them.

While I wasn’t aiming to beat the champion this time, I still loaded up on potions and revives, and went in to gain some levels.  I also gave my Weavile a lucky egg to hold, which would double the experience he received.  I was going there to level him up.

Of course, by this point my team had leveled up since my first try, so the Elite Four were somewhat easier and I soon found myself facing Cynthia again.

Once again I was locked in a long, drawn out battle.  Every one of her Pokemon I knocked out was a bit more experience for my team, so I kept on going until I found myself once again facing Garchomp.  Facing him was my starter Pokemon, Perry.

This turned into a battle of attrition.  He hit me with an Earthquake, which had previously been enough to one-shot Perry.  Now though, he had leveled up enough to be able to ride it out, though just barely.

I hit Perry with a potion to heal him up again while Garchomp did sword dance, which boosted his attack.  The next round I countered with charm, which lowered his attack while he did another sword dance.  We went through a series of round of that, until he ran out of moves for that, so I got a charm off again before he hit me with another earthquake.  I used a potion and got hit with another earthquake, again, over and over, round after round, until he ran out of earthquake moves.

At that point Garchomp fell back on a lesser attack and I was able to get an ice beam off… I had also trained that on Perry just in case… and boom, Garchomp went down.  I had won.

My goal was to level up my Weavile in order to face off against Garchomp, but I ended up not even needing him.  In assembling a better team I had leveled up enough to win.

From there Cynthia congratulates you on your victory. 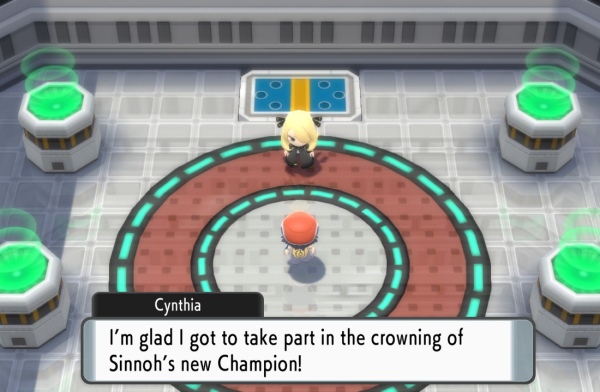 Then Professor Rowan shows up and they take you to the room where they record you team in the hall of fame. 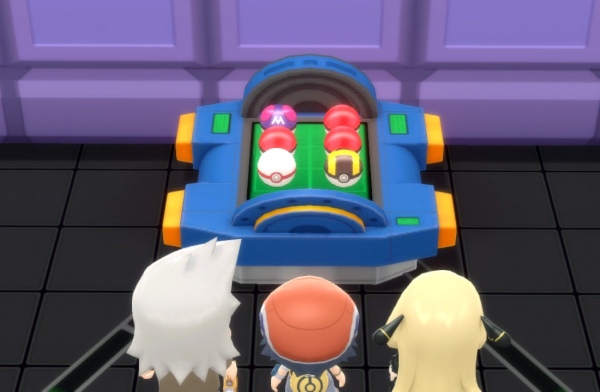 Everybody healed up and in their Pokeballs

And then you get a show that displays each member of your team, then the final victory shot.

After which, the credits for the game roll on by.  Then the game restarts and you’re back in your room, where the game all began.

Back where it all began

The game is not done though.  When you go down stairs your mother tells you that your rival was looking for you.  Then there is the Pokedex to finish up.  I went by and Professor Rowan said I had 145 found so far.  Just a few more to go.

And then there are the legendary Pokemon Uxie, Azlef, and Mesprit, still to catch, which I recall being a bit of a pain.  You have to find them on the map and then get to them before the move on.

So there are still things to be done.  But the main narrative, the story of the game, is complete.  40 hours is about par for the course for me.