Lost Ark, the free to play ARPG MMO goes live on Steam today for people who didn’t pre-order.  Those who did put in some cash for a founder’s package got to start playing on Tuesday, once they had the update issues worked out.

I actually plunked down for the cheapest founder’s package just to get an early look at the game, and it is probably good that I did.  Over at Steam DB they were showing a half a million people playing concurrently already, and they have already had to add some new servers to support the influx, and are adding more today.  Character creation has been limited on some of the original servers and I imagine things will be more hectic today once the flood gates have opened.

So why Lost Ark?

First, somewhat to my surprise, this game was already on my radar back in 2016 and made the cut of games I might play in 2017.  Of course it and some of the other titles (I had Pantheon and Camelot Unchained on that list as well ferchrissake) did not ship and somewhere along the way since then the game entirely slipped my mind.

Fast forward to 2022 and it has Wikipedia page now, has been out in Korea for a little over two years, and was picked up by Amazon Games to be published in the West.  And it was via Amazon that I heard about it as I follow the Amazon Games discord for news about New World and whatever else they are working on, including Lost Ark.

Yeah, but why Lost Ark?

Basically, because it was described as a clicky action title and an MMORPG all rolled into one.  What is not to like about that?  Also, free, cheap to get on board early, and whatever.  Why not try something new that at least superficially presses a number of my buttons?

So how is Lost Ark?

Initial impressions… it is very Asian in that “giant sword, overwrought armor, stilted dialog” sort of way.  That isn’t necessarily bad.  It has its dedicated fan base in the west, and even I used to watch badly dubbed Asian martial arts films with awkwardly stilted dialog back in the day.  Frankly, they should embrace that.

The game itself has a few classes to choose from, though it looks like they left space in the UI for additional classes later on. 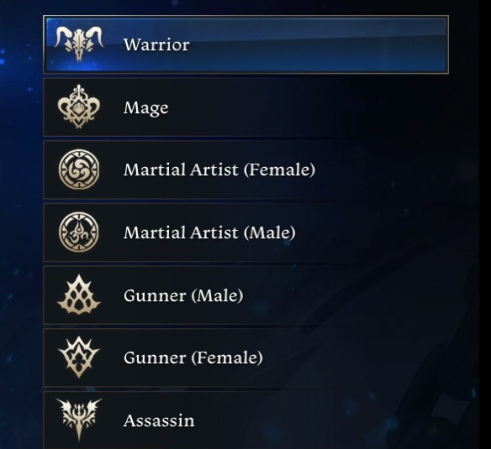 Yes, gender locked classes are a thing.  That is very much an Asian MMO thing.  Warriors are men, while mages and assassins are women.  But at least there are his and hers gunners and martial artists, though I didn’t check to see if they were actually identical to each other beyond the sex divide.  Also, all women must wear high heels.

The classes each have a difficulty 1-5 difficulty rating.  I went with warrior because it had a 2 out of 5 difficulty, though if you’re going to make a rating scheme like that and don’t have a 1 and a 5 in the selection, I am not sure you’re doing it right.

Character creation has the usual set of hairstyles and faces you might expect from an Asian title, with hair and makeup options that apparently have quite a range of color options.  I stayed pretty conservative, but I saw some crazy samples out there.

I hit "random" in the Lost Ark character creator. pic.twitter.com/JoiOyGT8T1

What warriors can be

After some fiddling around, I went with paladin first, which seemed to suit me.  But I still went back and made a berserker, just to see if it played differently.

I made it through the tutorial into the first town where you learn about the arks and their loss and how the tablet that describes where they are has a big chunk missing, which has critical aspects of the tale. 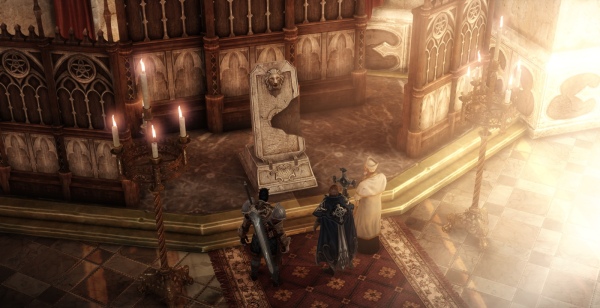 Somebody took a bite out of it

The combat seems to vary between facing masses of mobs that you dispatch with your special attacks and the occasional boss mob with a special mechanic that you have to dance around… or just lay into and DPS down while keeping the health potions flowing.  Just don’t run away if it is a public boss, because it will reset for everybody.

Another pack of bads to lay the smack down on

The main problem for me so far has been the control scheme.

I am not saying that you cannot have your own special set of controls, but there was probably smoke coming out of my ears early on as I tried to come to grips with a control scheme that put abilities in the WASD section of the keyboard.

Not the control scheme I was expecting

So far it has been entertaining enough.  The story really starts in the first town where you learn what is going on and where you need to go next.  You also get a mount pretty much right away.

Riding on day one

Otherwise it is very much in the ARPG genre.  You fight things.  You gain xp.  Loot drops on the ground.  You carry on.  It is an interesting mix of Diablo-style click fest and Asian MMORPG.

The title is also full up on all of the things you expect to find in a no subscription, free to play title.  It is fully formed on that front in a way that New World is not with a large cash shop, daily login rewards, and all the trimmings.

Welcome to the cash shop

But one of my New Year’s predictions was that New World would end up moving in that direction as time passes.  It pretty much has to in order to survive.  “Cosmetics Only” is the cash shop ideal.  The reality is you gotta sell the crap out of everything possible to make money.

I am not completely sold on it yet, and I bet it will be full up come this evening with people trying it out this weekend, so we’ll see if I can even get on to play at that point.  But it has potential.

Looks like there will be some delay in the launch.

Unfortunately, due to deployment issues, launch is delayed. We hope to have this resolved in a matter of hours.

Your patience is appreciated and we’ll update you soon.

Lost Ark servers are online and ready for play!

We have found a fix for the missing characters and have pushed a new build configuration to Steam, so you’ll need to exit out of your client, update, and reload the game before you can play.