Our starting spot in our new Valheim world was, as I mentioned, not as close to open water as it was on our first run at the game.  That first time turned out to be a bit of a luxury, because sailing the open ocean is an essential part of the game.

Seriously, you must have a coastal base from which to voyage.  It is just the way of thing on the 10th world.  So we headed south from where we started, where our first couple of camps sprouted, from where the trophy stones and first spawn point were located, and found a bit of an island on the coast of the Black Forest where we thought we could lay up and defend ourselves and started to set up shop.

The New Base on the coast

It was, of course, a struggle, and all the more so when night fell and we were still trying to throw up a perimeter and get a roof over some beds.  Deaths happened and a melee of us versus greys broke out on the narrow strip of land between us and the dark woods.

But we persisted, eventually got some shelter setup so we could sleep away the nights and work in the light when the greys are less active, and a base began to form. 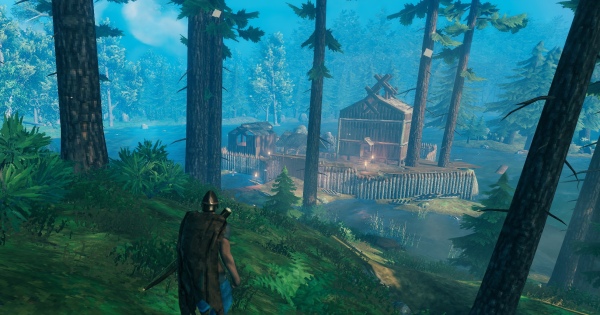 Base 2.0, beyond basic shelter

It wasn’t ideal, and there were some issues at the gate when the inevitable invasion events started rolling in at as, leading to waves of greys assaulting the walls. 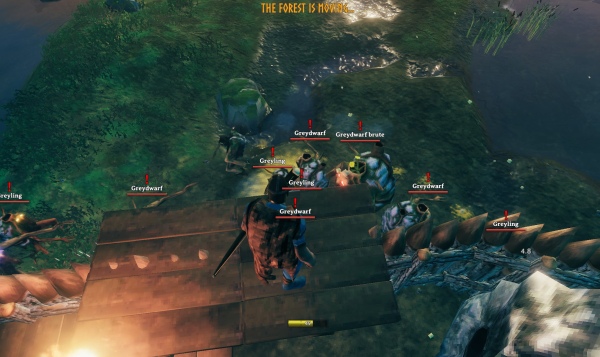 Potshot… erm, Brynjar… is ever the base builder and got in and revised and rebuilt over the time while I was away… the screen shot above was taken from my laptop, which was tethered to my iPhone for data because I was out in the wilds where WiFi isn’t a basic human right yet… and many things sprouted up.

For starters, in order to avoid attracting attention from the Black Forest and the occasional wandering troll, he put up a covered bridge that ran straight north to the mainland in the direction of our earlier bases.

The view from the bedroom loft along the bridge

If you look at that image full size you can see the perimeter of Ula’s boar breeding farm on the other side of the bridge.  Boars are now much more fertile and the whole animal husbandry thing is less of an exercise in futility relative to simple hunting boars in the wild.  There is even a new tool, a butcher’s knife, which can only be used to slaughter tamed animals.  Another handy game update.

Also, you make a covered bridge in Valheim for the same reason they did so in New England, the timbers don’t rot away so quickly if covered.

The front gate was redone as well after Brynjar, who is also the chief researcher at this point, read up on defenses and found a design for a bridge that mobs wouldn’t cross.  Or mostly wouldn’t cross.  The first invasion saw a greydwarf shaman run right across the thing and up to the gate. 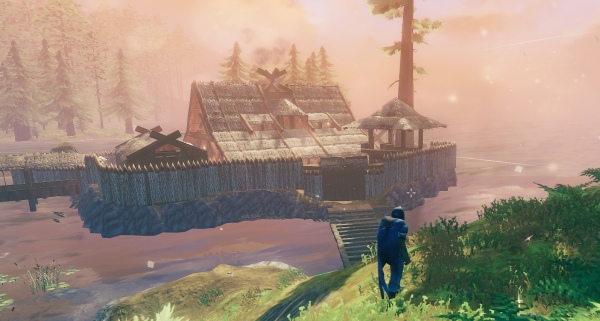 For the most part though the greys do not like it and opt to jump in the water.  Even the aforementioned shaman, on reaching the gate, turned around and jumped into the water.  And once there you can just go out, stand on the shore, and club them like so many baby seals as they struggle to try and reach you.

So we ended up with a very nice base, largely thanks to Brynjar’s work.

Looking back from the top of the bridge

But most importantly, it put us on the water and gave us an outlet to the ocean.

The dock at the back of our base

That is me in our initial Karve, the first real boat and the one that makes exploration and sea travel a viable venture, as opposed to the raft which, as I wrote, was slower than simply walking. (Though, at least sailing along shore, it was safer.)

Brynjar built that first Karve and left it in the dock so that when I logged in and saw it, I grabbed the keys and took it for a spin immediately.  He logged on to find that I had absconded with the boat before he had even gotten to give it a try.

And, in a very strange stroke of luck and/or coincidence, he asked if I was out looking for the trader, a venture that took us a long while the last time around, and about 15 seconds later I sailed close enough to the trader for him to appear on the map for us. 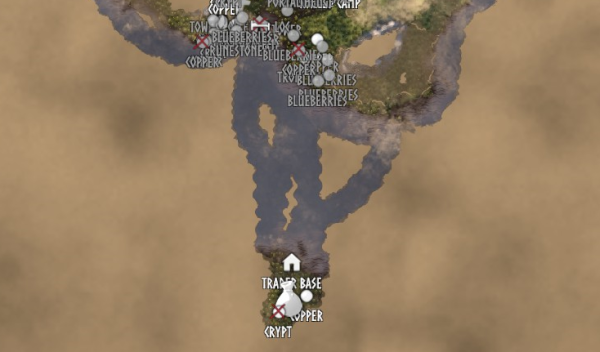 I suspect the discovery radius of the trader is something else that has been increased since we last played as well.

Of course, that meant setting up a base on the far shore and working on getting our first pair of portals going.  Things were suddenly moving along, but we were still not in a hurry.  We have what we need to carry forward, we’re still building up supplies and upgrading our gear.  Trolls are being hunted and a couple of us have full sets of troll hide armor.

But most of all we have an outlet to the ocean, place to set sail from.

The base and our boat from the shore

We can now set out to find our next boss, The Elder, and get ourselves setup for that fight.  And with that, the swamp biomes will become the next place to gather resources and we’ll have to explore further afield to find them.