The polls for the CSM17 election have been open since downtime.  The voting has begun.

Coincidentally it is also election day here in California, with the primaries being decided today to see who will be on the ballot in November for the general election.  And in both California and New Eden, incumbents are likely to win. (Though at least New Eden has fewer incumbents.  I’ve had the same congress critter for 30 years and they will likely win again this year.  Another aging Boomer who won’t let go.)

And in California you don’t get prizes to celebrate the election.  CCP, on the other hand, is promoting the election with its now standard go-to method, login rewards.  So you should at least launch the game to collect those. 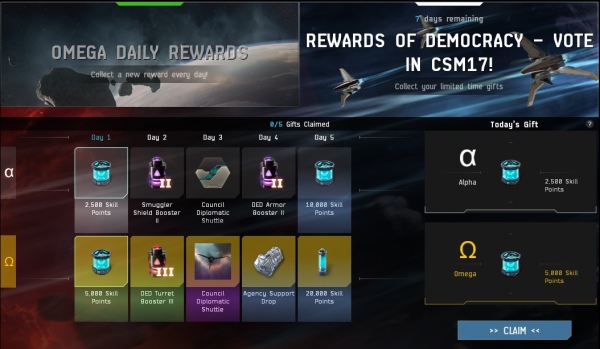 Some skill points and other goodies

In order to vote in the CSM17 election you have to have an Omega, which means subscribed via cash or PLEX, account that is at least 60 days old.

CCP also has a video demonstrating how to vote when you get to the voting page.

According to today’s patch notes, there are also election information stations in game:

So you have a couple of places to look.

And, finally, there is who you should vote for.

I listed out all the candidates in a post last week, and CCP has their own listing of the candidates online.  There are also plenty of interviews with candidates that have been posted on YouTube.  You can scroll down the posts in the /r/eve subreddit and find CSM related posts highlighted with the yellow “CSM” flair.

The election runs until downtime (11:00 UTC) on June 14th, so you have some time to do research, though most people who are invested in the election will likely have decided already and will be voting today.

I will be voting in my own self-interest, as most people will, going with the Imperium ballot which was posted this past weekend.

As for who will get elected, I am going to update my guess from last week with this list:

We shall see how it goes.  The winners will be announced by CCP on June 16th.