I saw this image getting plastered all over social media, mocked by all and sundry, related to Meta announcing that they they were expanding the Horizon Worlds metaverse product into France and Spain.

Zuckerberg goes to France and Spain

That is such a “Welcome to the Uncanny Valley!” picture that I was sure it must have been some old bit of test material or something somebody mocked up in order to poke fun at the dubious vision Mark Zuckerberg has for the metaverse.  I mean, there are probably more polygons in play there than in something from Second Life back in 2003, but that just seems to prove that it isn’t the polygon count that matters, but how you use them.

I was convinced that no sane company would lead with that image.

And then I followed the link to the announcement and, there it was, front and center, the anchor image… the only image… for the post.

AYFKM?  I am still half convinced it was a mistake and you’ll find that my link to the post directs you to a copy on the Internet Archive because I feel like somebody will realize their error and fix it.  I mean, even The Onion is having a go at him over this.

But it has been several days now and nobody has updated the image.  That was the look they were going for.  I mean, I guess it doesn’t draw as much attention to the fact that he has no legs.

Anyway, as noted, I am hardly alone in calling this out as a joke.  John Carmack wept.

In fact, the feedback has been so consistent in ridiculing this that Zuckerberg had to get out on Facebook and Instagram to announce that they would be doing major updates to Horizon and avatar graphics.  I like the Twitter reaction better.

Wow. Mark Zuckerberg basically got cyberbullied so much over his company’s metaverse graphics that he announced an update. pic.twitter.com/Eu7108qCUu

That is certainly better than the original, though now I think Zuck might look more like a real boy in Horizon than he does in real life.   The scenery is good though. 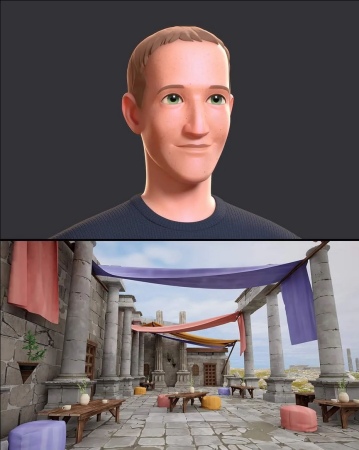 No word on the whole legs thing however.  Legs are probably still off the table… meta-phorically speaking.

Of course, he’s getting dragged for the updated version as well.  He’ll be meme fodder for a while.