It is September and, while the calendar tells me summer has a few weeks left to run, in my head summer ends at Labor Day in the US, which was this past Monday.  My daughter is back in class, pumpkin spice flavored everything is threatening to return, and if we could just get a bit of cool weather we would be set.  Unfortunately, it feels like “Endless Summer” might be the new setting on Earth.

September also means we have the August Monthly Economic Report for EVE Online.  This will be the check point for whether or not we’re seeing a “summer slump” or something bigger in the game once we compare it to the next few months.  The kids are getting anxious and tossing ominous charts around Reddit.

Every MER is a benchmark for something I suppose, so let’s see where things stand.

August 2022 – Production vs Destruction vs Mined

While I like that chart… the way I like any chart that shows data over time… it can see be a bit vexing to read as the daily number tend to be up and down.  The data used to build that chart though, that is much more clear.  It shows that there 79.25 trillion ISK in value produced in August, down slightly from the 79.75 recorded in July and the 81.28 we saw in June.

Meanwhile, the regional data shows these as the top ten regions for production.

Again, the usual suspects for null sec, plus the regions supporting trade hubs like Jita top the list.

As I said, it has been a flat summer economically speaking.  Yes, I still cannot reconcile the difference between those two data sets, but I remain satisfied that they trend in the same way each month.

Meanwhile, this month saw three new charts in the form of break outs of the three sub-charts that debuted in the Produced/Mined/Destroyed chart back in June.

CCP Estimate dropped me a note to let me know there were some new charts and I am really happy with the additions.  First, I like these charts are the are a clear representation over time of where specific activities occur.  Second, not I don’t have to spend time in Paint.net cropping together my own stand-alone versions.  So a win on that front!

On the war front we still had two minor conflicts going on in July, with Brave and V0LTA defending Pure Blind from Fraternity and the Imperium’s punitive offensive into FI.RE’s space.  With that in mind, the regional data shows theses as the top ten regions for destruction:

At least Pure Blind and Immensea, the two regions that saw most of the action in those wars, made the cut.  But neither were setting any records, as The Forge and Pochven topped the list.

Overall the region data said that 26.12 trillion ISK was destroyed in August, down a bit from the 27.48 reported in July and the 27.08 reported in June.  Again, a fairly flat line, even if it is trending down a bit.

Not as nice an alignment as one would hope for, but still fairly flat and trending down in August.

As for where destruction took place, there is the second of the three break out charts”

While null sec remains the primary engine of destruction in New Eden, it has been slowing down some and other regions have a larger slice of the chart in recent months.

Somebody threw together some data on capital ship losses, something that is primarily a null sec thing, and how that has been trending down, which no doubt aligns a bit with what the chart above is telling us.

Trade remains the heartbeat of New Eden, and the top regions in August were made up of the usual set of names.

And with The Forge accounting for 400 trillion of the August total, that means about 75% of in-game trade happens in Jita, Perimeter, and the other systems in the region… but mostly in Jita.

Now we’re into the money section, where we try to see where the money is coming from in New Eden, which I always start off with the top of the ISK Sinks and Faucets chart.

For those who cannot read the text, and I number myself in that group, here are the top items on the list:

That carries on the theme of a flat summer economically speaking, though the faucet and sinks chart looks more exciting than those numbers.

While you can see NPC bounties on a down trend, commodities looks like they were having a party, at least at the very end of the month.  However, if we look at the commodities over time chart, we can see where that came from. 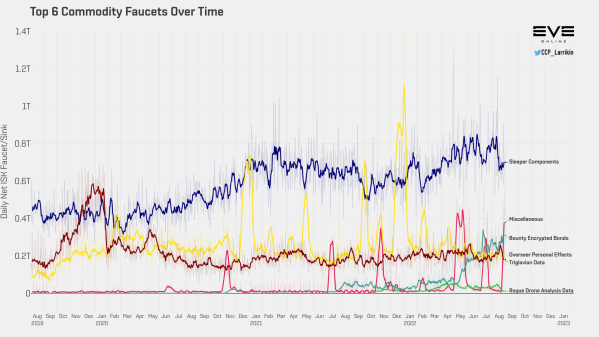 Blue loot, the wormhole space ISK faucet, was actually down in August and it was only the spike in miscellaneous… which could be event rewards from Caldari Union Day, which landed at the end of the month, but which I guess could also be AIR rewards, which I have a pile of to redeem… that kept commodities level between July and August.

There was also a bit of a rise in encrypted bonds, which represents main and reserve bank rewards. 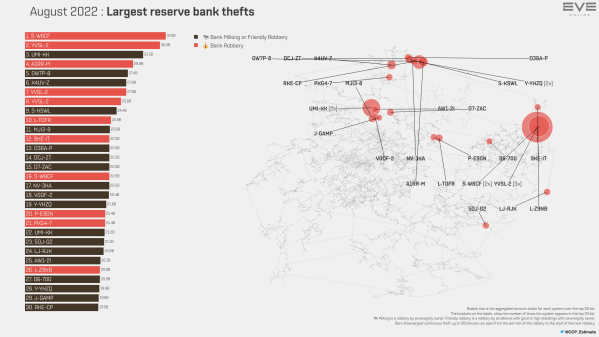 So commodities remained flat, with other avenues picking for a decline in sleeper commodities coming in from wormhole space.

On the NPC bounties front, the top regions were:

The regional data totals bounties up to 26.2 trillion ISK in value, down a bit from July’s 27.11 trillion.  That doesn’t quite align with the 28.3 trillion recorded on the faucets above, but the decline in both data sets adds up to about a 900 billion ISK decline.  We take our data wins when we find them.

All of that meant that ISK faucets out paced ISK sinks by a fair margin, but ISK taken out of the game by CCP, or excluded due to being associated with inactive accounts, meant that for the second time this summer we had a small drop in the overall ISK in the game.  The first time was in June’s MER.

That meant that the money supply chart was flat to the point of a bit of a decline at the end of the month.

Less money in the system should give ISK velocity a bit of a boost, and we can see the decline tapering off and even reversing a bit in August, but overall at the end of the month it was headed downward again.

PLEX is starting to be a sore spot, with a single PLEX now selling for over 4.6 million ISK, making 30 days of game time a 2.3 billion ISK cost.

Of course, some people have that kind of scratch to hand, as we see with a bonus chart we got in August, looking at the distribution of wealth in New Eden.

This is not as shocking as you might think.  Wealth accumulation over time favors those in for the long haul.  People working at it since 2003, especially those who were in on some of the lopsided aspects of the economy at various points, are bound to have a lot more ISK than those who shows up late.

Still, this chart did generate its own thread on Reddit.

What to say about mining in August?  Well, mineral prices continued to climb, which strongly suggests that there is still more demand for minerals than there is supply. 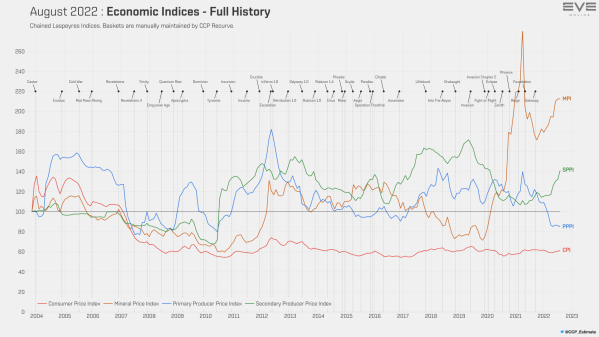 So both data sets at least show a fairly flat transition from July to August after having dropped off from June.  The demand, in the form of higher prices, is not getting people out to mine.

As for where mining happens, the regional data shows these are the top ten locations:

When it comes to moon mining however, the output remains low, with 3.2 billion ISK in moon ore being mined, down a bit from the 3.22 reported in July and the 3.995 billion reported in June.

The top regions for moon mining were:

Again, to put those numbers in perspective, I make more churning out mechanical parts via planetary industry on one character in a month than any region on the list’s moon mining output valuation.  We need the moon goo products for T2 ships, but the price for that looks to be suppressed, likely due to over supply.

And, finally on the mining front, the third break out chart focused on where mining takes place in New Eden based on security band:

Again, thanks to CCP Estimate for these break out charts.  The larger size gives a slightly more granular view.  Wormhole space, which provides gas, is the smallest slice, but still significant, while low sec, also now a provider of gas sites needed for capital production, continues to be a substantial provider.

And that is all I have in me for the August MER.