The group returned for another run in Nagrand this past weekend, still having some tasks to complete. 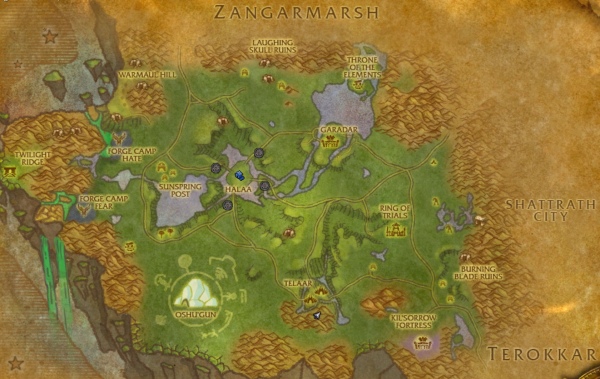 Once more in Nagrand

Of course, before we could get stuck into Nagrand we first had to figure out what was going on with our characters.  There were specs to be looked up, talents to be researched, skills to be trained, and the need to figure out where our mounts and pets went.

I had forgotten that Wrath took pets and mounts out of our bags and gave them their own tab.

Actually, I might not have noticed since paladin mounts were summoning spells back in vanilla rather than mounts that sat in your bag.  But then I bought a flying mount, clicked on it in my bag, and it went away.  Then I had to go find it.

The mounts tab on your character sheet

We also had to talk about flying mounts and whether or not we wanted to invest in them as a group.  I already had, as noted earlier this week, but not everybody was sold on the idea.  The problem was that buying flying right before Wrath meant losing it the moment we showed up in Northrend.  That has been a problem with about every expansion since too… except Cataclysm.  We got flying right away in that, didn’t we?  Or am I mis-remembering?  I have been doing a lot of that of late.

Anyway, flying mounts were not going to be mandatory for the group.

We would be riding old school

We did, however, all need to be 67 to get onto the same set of quests.  Fortunately, only Beanpole was shy of the mark, and only by a sliver of xp.  We went out of Telaar and hit the first mob we saw, which was enough to level him up.  The group was all on the same page again.

67 across the board… and on an alt as well

That allowed us to share the quests he was missing, then it was off around Nagrand once more.  We stopped off at Forge Camp: Hate for a few quests against the invaders.

It is one of the dark patches in Nagrand

Then it was up to Warmaul Hill for the final rescue of Corki.  We fought our way up to the cave he was in, updated the quest, then had to go find Cho’war in the cave across the way.  We ended up in a bit of a chase with a Horde group clearly on its way to the same destination.

This led to a bit of comedy as the two groups managed to get mixed up and both groups ended up having members fall off the upper ramp on the way to Cho’war and getting turned around and lost.

Ula and I ended up at Cho’war on our own and managed to take him down.

Then we had to run back down to find where Fergorin and Beanpole had ended up.  Meanwhile, the Horde group was also running around trying to collect its members.  Ula and I ended up jumping down to the lower level and we all ran back up together.  Somehow, some distant memory of doing this years ago stuck with me and I remembered the route.

We arrived back at Cho’war, who is on a fast respawn, so were able to engage him again… only to find that we didn’t need to because the corpse from the first fight was still there.  We killed him again anyway, collected the key, then dropped down to the lower level and ran back across to Corki to free him for the final time.

There was, however, some strange lag going on, and only three of us got the update right away for releasing him.  As we sat around trying to figure out why Fergorin was left out of the update, it suddenly arrived, having been delayed somewhere, and updated him. 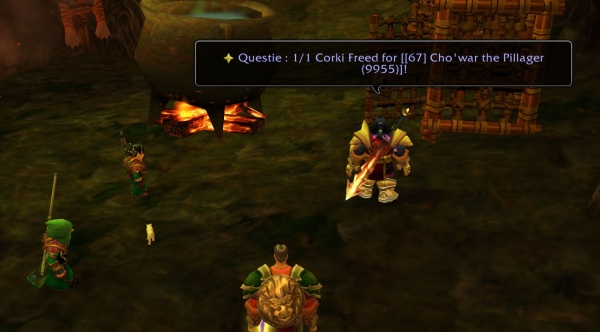 Then it was back out of the cave and… well, it would have been a perfect time to have a flying mount to just head off to the next quest… but instead we schlepped along on the ground.

The last quest on the list for the day was Gurok, and we had some trouble getting together on that one.  Fergorin had the quest to go get him already, but the rest of us did not.  We had to figure out where the quest came from, which turned out to have a pre-requisite quest, which the three of us had to do before we finally got ourselves caught up with Fergorin.

And then we had to find Gurok.

After some mis-direction at the Laughing Skull Ruins, we found out he was actually up on Warmaul Hill.  So we rode back on up there again to find the place to summon Gurok up on the peak of the hill.

Summoned, he was handled in rapid fashion.

We turned that in, and that was the end of the road for me for the day.  But we still have a couple more possible quests in Nagrand.  I am not sure if that will be enough to get us to our goal, level 68 for the whole group.

But if it isn’t, then we’ll be off to the Blade’s Edge Mountains.