Between a meeting that ended early and a visit to the dentist I found myself in the right place at the right time to be there when Wrath of the Lich King Classic opened up on our server, Bloodsail Buccaneers.

I am actually still impressed with how smoothly things went, at least on our server.  Newly promoted VP and WoW Classic executive producer Holly Longdale can be proud. Things started off on time… even a bit early.

I checked in on the server during my lunch hour… working from home has some benefits… and found that everything was still as it had been the night before, with the XP buff still running.  So I got out my Death Knight and did another half a level of quests while I ate.  Closer to Northrend for him.

I also positioned my main, Wilhelm, in Stormwind in anticipation of the coming ride to Northrend.  When my afternoon meeting wrapped up 20 minutes before 3pm, I decided to log in to see what was going on.  I couldn’t remember how the expansion kicked off back in the day, but I saw people riding over towards Stormwind harbor.

Stormwind now has a harbor.  That was a bit of the pre-patch, including routing the boat to Auberdine to the new dock facilities in the big city.  But the action was all clearly at the dock at the other end of the harbor, where a crowd was gathering.

Arriving at the dock in Stormwind

I worked my way into the crowd, uncertain if I needed to do something before the boat arrived… I remember some past scenario where you ended up in a different phase of the harbor if you were not on the right quest or something… but the fact that everybody else seemed to be in the same situation kept reassured me.

Hanging out on the dock

Then King Varian Wrynn yelled out, calling out to defend the harbor.

I am not sure which harbor he meant, but we certainly had more than enough people in Stormwind harbor.

Then, at least, the boat appeared, popping into view due to the horrible draw distance limitations in classic.  The crowd came alive.

The boat looms into view

As it pulled up along the dock, people piled aboard.  It might have been the most crowded ship I have ever seen in World of Warcraft.

Will she swim with this load?

Then the boat was in motion, five minutes before the appointed hour.

This was unfortunate for Ula, who had expected things to run on time and had not arrived at the harbor before the boat pulled away.  She had done such great videos of the opening of Burning Crusade Classic and Shadowlands.  But Blizz being early robbed us of another video.

I was on the boat though, and off we went.

In the first wabe!

We made the transition and appeared in Northrend, pulling up to the dock at Valliance Keep.

When we pulled up to the dock, those who had the patience to wait flooded off the boat into the keep.  Others, less patient, had jumped off the boat and pulled themselves ashore, hoping to beat the substantial crowd. 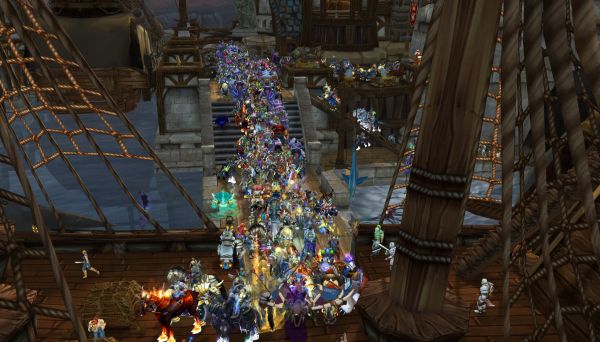 The first comers to the land ran to the inn, the quest keepers, the flight point, and to the trade skill trainers, a mass of people swarming over the town. 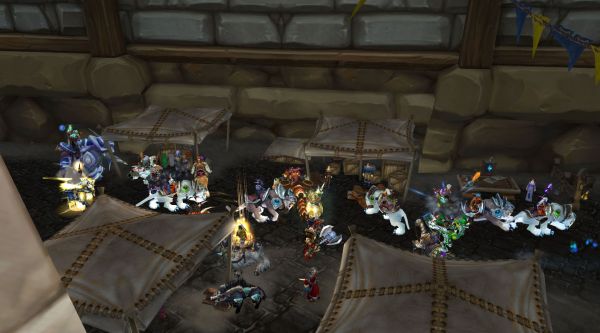 Up and down trade skill alley

The initial moments of the expansion seemed to go quite smoothly.  I got in there, trained up the trade skills I could… my engineering is still well behind… grabbed the flight point, and stopped at the inn.  That was about all I had time for.

Of course, there were different circumstances on different servers.  Marie Peters posted a screen shot of the queue on Grobbululs.  That is a difficult queue to swallow.

332 minutes is longer than I would wait

Fortunately, she has a character on our server to work on.

Meanwhile, as the day progressed the boat ride to Northrend became somewhat perilous.  As server loads increased, people started getting dropped in the water zoning into Northrend… problematic if you happened to be on a Horde Zeppelin I imagine… and Blizz flipped the switch to 2008 mode and started letting the dockmasters teleport players to the dock in Northrend.

Just talk to the dockmaster and they’ll teleport you.  Captain Placeholder would be so proud. 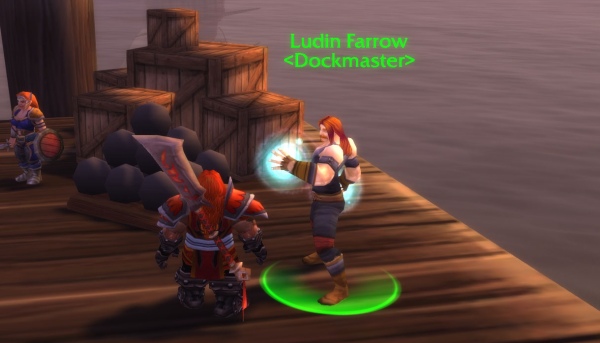 Send me to Northrend

I remember slow load times dropping me in the water back in 2009, long after launch.  It was a thing.  But with the launch crowd, it was happening a lot more.

And now that the expansion is open… I’ll probably work on my alts a bit more, get them up to level 68.  The beginning zones will be so overrun tonight and I am not feeling the mood to stand in line like we did back at the launch of WoW Classic.

Still, Northrend is open to us.  The adventure begins!