Lord of the Rings Online is getting an expansion of sorts today.  It has been dubbed a mini-expansion, but it is some new content for the game.  So welcome to the Before the Shadow… expansion… thingy. 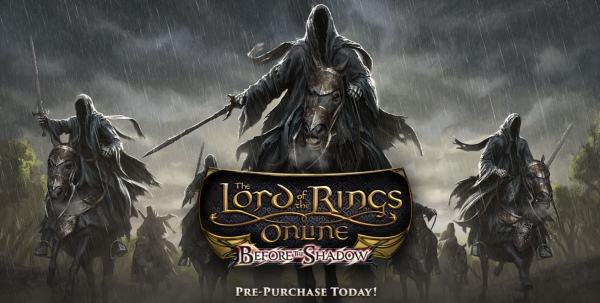 Before the Shadow and after the summer

You will have to pardon my lack of effervescence over the event.  I am not down on LOTRO in particular and there is always part of me that is happy to see the game carry on and thrive.  But I have also never played it beyond the Siege of Mirkwood expansion and likely never will, so there is a bit of detachment there as well.  I will remain forever between Bree and Moria, content with having seen that stretch of the game through several times.

And I am in a bit of a mood about the eventual level of absurdity that PvE driven MMORPGs end up going through to continue to drive more content, more levels, more skills, more mobs, and more whatever.

Though, at least the new content seems to be looping around to the old places I might recognize, even if I will never be in the level range to run it.  From the description:

Reveal the mysteries of the One Ring as you venture through the reedy fens of Swanfleet and the moors of Cardolan.  Journey alongside Boromir to Rivendell, and run afoul of the Witch-King and Nazul in their pursuit of “Baggins” and the peaceful land of the “Shire” as shadow begins to pour forth from the land of Mordor.

So it sounds like we’re getting a bit of a prequel adventure, which is to be expected I suppose.  There is only so far you can go once you’ve thrown down the dark tower… though I don’t think we’ve scourged the Shire yet.  But they’ve added some areas to the Shire, so maybe we’ll get to that at some point.

The actual meat of the expansion is fairly thin:

I guess I could try the new early leveling experience.  We shall see.

And the content is just $20, which is a pretty reasonable price in this day and age if what is on offer appeals to you.  You can, of course, spend MORE than $20.  That is always the way. 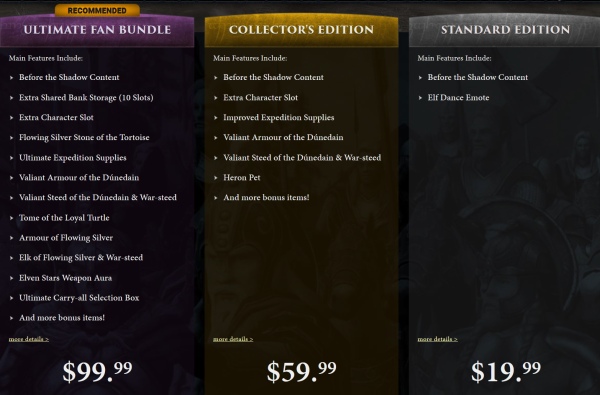 Before the Shadow pricing options

So it goes, the game continues to expand.  It is as though the Wall Street saying, “If you’re not growing, you’re dying” is true.