With our arrival at Star Trek VI: The Undiscovered Country, we are at the end the run of movies centered on the original series cast.  We are now up to 1991, a dozen years after the release of the first film and a good quarter century past when the original series started the whole phenomena. 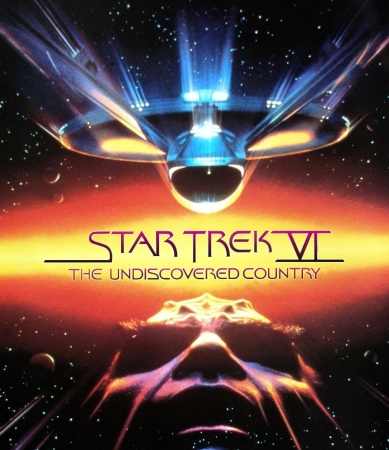 By this point Star Trek: The Next Generation had gotten through its initial rough start and had settled down into its fourth of seven seasons, so there was a newer and perhaps more relevant and approachable Trek canon to explore.  Meanwhile, even The Simpsons would poke fun at the aging original series cast in the Itchy & Scratchy Movie episode the next year. 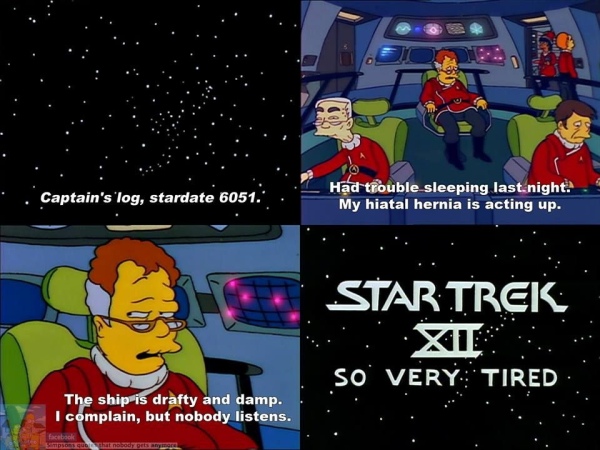 And then there was Gene Roddenberry, the creator of the series, already in declining health, who passed away a couple of months before the film’s debut.  So, in this time of change and transition, the final fling of the original crew arrived.

The film opens with the USS Excelsior, now commanded by Captain Sulu, detects a massive explosion on the Klingon moon Praxis, which shatters that celestial object and damages the Klingon home world so badly that it is estimated that it will no longer be able to support life in the next 50 years.

The Klingons get the Federation on the line and want to talk peace as the cold war with the Federation is no longer economically sustainable, something of a reflection of our own times when the movie launched, where the break up of the Soviet Union, the reunification of Germany, and the dissolution of the Warsaw Pact led to a new reality between east and west.

Were the Klingons always a stand in for the Russians?  And maybe the Romulans for China?  I don’t know, but for the moment that fits.

Kirk and his bridge crew, minus Sulu and Spock, as summoned to Star Fleet Headquarters… we know that is what it is because there is a Batman 66 quality sign on the wall declaring it as such… where Kirk is told he will take the Enterprise to escort Gorkon to Earth.

Kirk doesn’t like or trust the Klingons and says so.  Repeatedly.  They killed his son.  They aren’t to be trusted, and so on.  But orders are orders and it is felt Kirk and the Enterprise might engender respect from the Klingons.  Also, if Kirk doesn’t go there won’t be much of a movie with him just hanging out in San Fransisco complaining about the damp and his hiatal hernia.

Kirk meets up with the Klingon ship and Gorkon is invited with his staff to a dinner on the Enterprise where there is much drinking and quoting of Shakespeare.

The quoting of Shakespeare is no new thing in Trek.  Khan had his moments with it in Star Trek II.  Hell, the film’s title is a Shakespeare reference. But the writers seemed to have fallen in love with the idea of the likes of General Chang, played by Christopher “Captain von Trapp” Plummer, quoting the bard and declaring that it can only fully be appreciated in the original Klingon.  And so we get a lot of Shakspeare out of Chang and others, as well as Spock quoting a Vulcan proverb about “Only Nixon could go to China” and some like nonsense that starts to feel a bit too try hard after a while.

Then again, perhaps they were reflecting the times to well once again, making a parallel to America’s cultural influence on the world.

Anyway, before the night is over Gorkon is dead, Kirk and McCoy are under arrest by the Klingons, and after a trial where they are defended by Michael Dorn, who is playing Worf’s grandfather, are sentenced to life at a penal colony on a frozen planet, which they even call a gulag at one point, so once more we’re bleeding a bit between here and there.

After a few rounds of prison humor and an elaborate and unnecessary side plot to kill Kirk and McCoy via an escape play, they managed to escape, beamed back up to the Enterprise and have to rush to save Gorkon’s daughter because the whole thing was a plot by war mongers on both sides of the cold war to keep the bad times going.

Enterprise ex machina.  Everybody saved, bad guys apprehended (or killed), and a standing ovation from the crowd at the peace conference… which includes a flash of some aliens doing a straight arm, vertical clapping motion just like the aliens in Galaxy Quest, which makes me wonder if that was where the idea came from.

In the end the whole thing is a bit of a mess, though it is also possible I am getting less charitable with each film, something that doesn’t necessarily speak well for the series.

We have a Cold War parallel, a murder mystery, a prison break, betrayal and collusion, and something like a presidential assassination all in motion along with the usual personality play going on, all of which feels like too much and not enough at the same time.  And the fact that pretty much everybody just ignores what Star Fleet tells them to do doesn’t help.

After saving the galaxy once more we end up with the crew back on the Enterprise, which is set to be retired… something of a shame because it was finally fixed and running well… and Kirk flaunts Star Fleet one last time, ignoring their order to return home, instead telling the helm “Second star to the right and straight on ’til morning.”  That isn’t Shakespeare at least, but Peter Pan.  Something oddly appropriate about that.

Once again, it feels like a one hour episode spread too thin over about two hours of run time.  I suppose I should applaud the consistency of the six films in that regard.

All of which leads me to the final ranking of the original series films.

I could be argued into a couple of swaps, but I think Wrath of Khan is the most solid of the run and The Final Frontier the biggest mess.

And that is it.  We will get to see Shatner one more time in Star Trek: Generations, but it will be the cast of The Next Generation headlining for the next four films.