When we started this war, we knew that we were fighting this to the end,” Vily told Polygon. “For us, this is a war of extermination. This is a war to the death. We are aiming for the removal of Mittani and The Imperium from Eve Online. […] We are here to purge them.

-Vily, in an interview with Polygon about the war

When, further on down the road, somebody asks what the goal of the war was, I will reference this quote.  It is one thing to say it in your alliance update, or on /r/eve, or in some other dark corner of the internet, but when he has given it to the mainstream gaming press, that is now the benchmark by which he will be measured.

Vily is allegedly aggrieved because he was “fired” by the Imperium, something he explains in that article.  However, people who were around at the time remember him leaving amicably.  And the Imperium has, up through the last CSM election, put Vily on their ballot because he was viewed as somebody they could work with.  Also, there is that long non-invasion pact we had with Legacy when PanFam was their enemy.  Not behavior consistent with the Vily narrative.

Anyway, he and Progodlegend continued to push a narrative that Goons are bad for the game,  forming a huge blue doughnut against us while repeatedly using a scene from 300 where the Spartans claim “warrior” as their profession as part of his narrative.

Somehow the Imperium are the Persians in this scenario, the farmers and other non-combat types who are… completely outnumbered by an overwhelming force attacking their territory?  That doesn’t sound right.

And it is especially suspect when you look at the MER and see who is farming.  But I’m just a brainwashed Imperium line member (per Vily), so maybe I’ve mislearned that historical metaphor.

On the bright site, TEST has changed its tune on operational tempo.  February is no longer the target date for VD Day (victory in Delve).  They have decided they will only need until the end of October, though that might only be the 1DQ1-A victory date.  It only took until week eleven to declare that the invasion has begun.   We will see if they actually attack in Delve some time soon.

There isn’t a “Northern Front” to speak of now.  All but four of the invader’s ihubs have been removed by The Initiative as of this writing.  They even got the staging Fortizar.  Anything left behind will end up in Hophib via asset safety.  The Initiative even visited there.  Basically, the attackers are gone, we aren’t doing much there other than clearing out the remains, and nobody lives there for now.

Querious is now where the action is.  Last week I speculated about whether the invaders might be making for NPC Delve given their run of attacks on the northern systems that lead there.

However, their eyes were apparently focused on another target, the 49-U6U system.

They first dropped a Keepstar in 1M4-FK, which seemed a little short of where they might want to be for NPC Delve, though it was a single jump from their staging in Khanid low sec.

Then they put up a Keepstar in P-ZMZV, which definitely ruled out NPC Delve as the immediate goal.  Instead they were using that as a staging to take the ihub in 49-U6U, an operation where they got out 3,000 pilots for node contest.  That was more than enough to take the ihub. 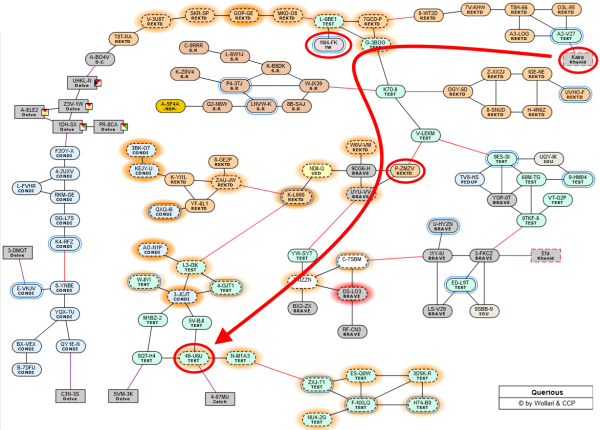 The system is important to them because it is on the direct route from Catch to Querious.  Those who have been following along at home might remember that PandaFam and Legacy concentrated all of their supers and titans in two Keepstars, laid down expressly to dock them, early in the war.  That seemed like it might be their invasion route.

Where they started out and the current focus

And then, of course, those ships sat there and did nothing while KarmaFleet camped the gate in 49-U6U with a cruiser gang.

Later the invaders laid down a chain of 13 Keepstars to move the supers and titans all the way around to Fountain to bring overwhelming force to bear on the Imperium Keepstars in Fountain.

Once done there, they moved to Khanid low sec to focus on Querious.  Now their attention has finally turned to 49-U6U.  It seems like they could have force the gate a while back, but maybe they don’t have the thousand titans about which Progodlegend was boasting a few weeks back.

Now, with the 49-U6U ihub in their hands, we can no longer cyno jam the system if we want, so they used their advantage to… make the slowest move op ever, gating one dreadnought at a time through the gate into Querious to jump them to their new staging in P-ZMZV.  They were paranoid enough to be worried about getting caught by Imperium supers and titans that they wouldn’t put more that one dread on grid at a time… covered by three subcap fleets around the gate… but not paranoid enough to just use the chain of Keepstars to jump their caps around into Querious the long way.  It seems odd. 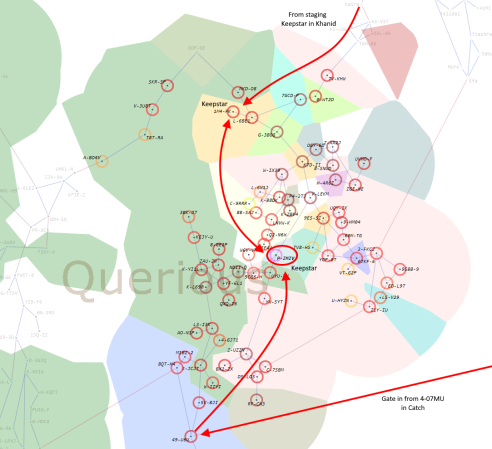 Systems in titan range of P-ZMZV and supply routes

Meanwhile, there is still an Imperium Keepstar and Fortizar in 49-U6U.  They reinforced the Fortizar, but then stood down for the armor timer when they found they did not out number us sufficiently to take the fight.  Who were the Spartans in that scenario?

But they’ll have to fight us on Keepstars and Fortizars in range of our caps at some point.  So far they have only faced subcap resistance, with some dread and carrier support, and had to bring out their own supers to overcome that.  It is going to be fun when we have titans on the structures waiting for them.

This week was Slippery Pete week for me, the name referring to a Tengu doctrine fit with the covert and interdiction nullified subsystems.  This allows them to use black ops jump bridges and pass through warp disruption bubbles.  They are slow to align and not at all tanky, but can blap targets out to 200km and warp off before you can get to them.  You don’t hold the grid with them, you warp in on a group attacking a target and savage them from range then warp off, only to return from another direction and pick off more targets. 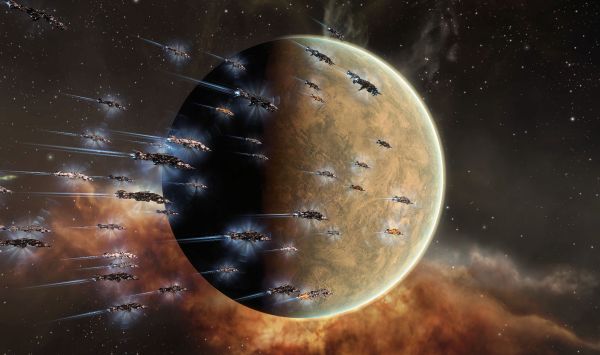 Petes on the move

I got in a Pete fleet four nights running during the week, and we managed to frustrate hostiles attacking our structures in Querious, saving a Fortizar while bleeding the enemy and making them jump their caps out prematurely, even killing an Apostle, a Thanatos, and a Revelation along the way. 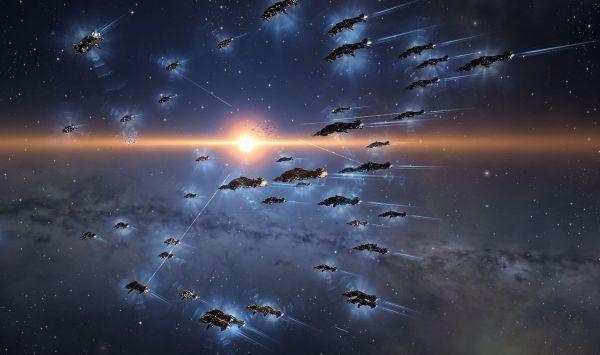 Petes on the Apostle kill

Petes are a lot of fun and inflict a lot of damage for very few losses when used correctly.

I was also on the ops around 49-U6U.  Friday night I was in the wall of battleships there to defend our Fortizar in the system. 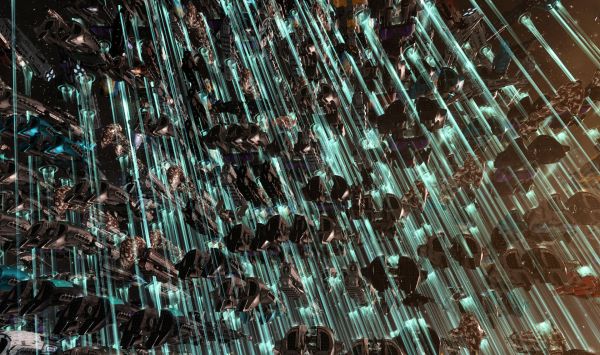 That was the Fortizar timer I mentioned above where were were outnumbered by the attackers declined to take the fight.  So we reinforced the ihub in the system, so now they’ll have to at least form up to defend it because we have a whole SIG dedicated to entosis ready to contest it if they do not.

I was also around for the hostile move op through 49-U6U, though they were so cautious that there was never an opportunity for a fight as they ran their caps through the gate one at a time.

However, later that evening they got careless and Kun’mi and his dread group dropped on a TEST titan, killing it on their Fortizar in 4-07MU.  They responded with a dread fleet smaller than the group that dropped on the titan… I guess all their friends moved already… and a brawl ensued.  I jumped in a Ferox fleet that burned in to support the dreads and got on a few hostile dread kills (and one fax) as we helped clear tackle so our own caps could extract. 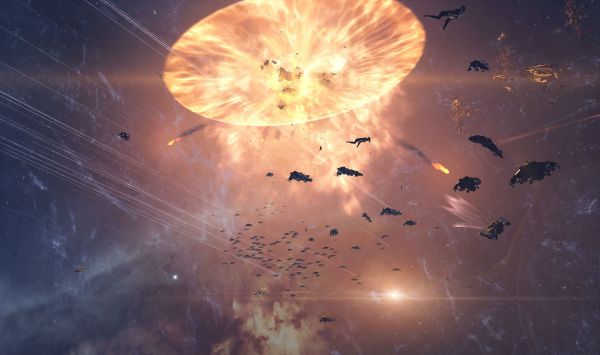 A Revelation goes up as we fly past 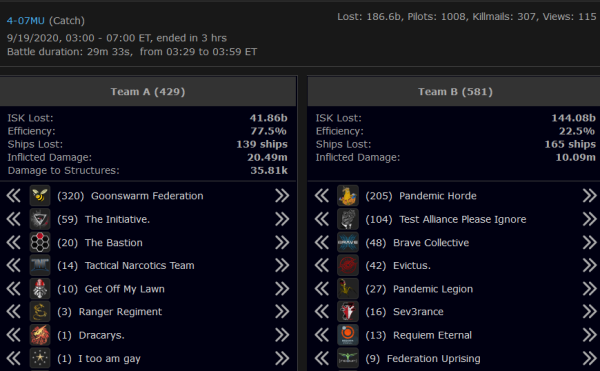 I ended up getting caught on the gate trying to get out, so lost my Ferox, but it was still a hell of a fight, run and gun and go go go.

So I ended up the week with having been in a few good fights, having gotten on quite a few kills, all for the loss of one Ferox.  My loss total for the war across all accounts is now:

The invaders remain careful… hesitant at times… and no doubt the titan kill I mentioned above is an indication as to why.

Their leadership is telling their members that we’re already dead, that the end is a foregone conclusion, that victory is theirs to take.  It is all the slanted rhetoric of war, and I would expect nothing less.

But, at some point, they are going to have to get on grid with one of our Keepstars within range of our supers and titans, something that has yet to happen, and put that rhetoric to the test.

I mean, Dunk Dinkle was on Talking in Stations saying that they don’t want to do that, that they might never do that.  Instead they want to keep laying down a bunch of Keepstars to try and bait us into fighting on their grid.

I remain mystified about this apparent plan to build a Maginot Line of defensive Keepstars in hopes that we’ll attack them.  It worked so well for the French in 1940.  Or maybe the Italians invading Egypt in 1940 is the better metaphor.  I don’t know, and I might fall back into a “that’s not how invasions work” routine if I am not careful.  Though, if they get one close enough to us, I am sure we will attack it.  We have attacked defended Keepstars before, and won.

It the end, it seems pretty silly.   If you’re going to run a war of extermination (see quote at the top of the post), don’t you have to actually go in and get the people you plan to exterminate?  How are they going to makes us leave the game if they don’t have a plan to blow up our stuff?  How do you achieve the declared victory condition with that mindset?

Anyway, the lack of offensive spirit in our foes probably explains why the Sunday PCU counts for the war remain tepid.  You need a big battle to get big numbers.

I fear we may have blown the horn of Goondor too soon.  The enemy remains tentative.

Other articles about the war this week:

(I’d link something other than INN, but EN24 just reposts CCP press releases these days and the New Eden Post has an apparent article quota of about 2 per month, and they blew one of them on EVE Echoes so far this month.)