Saturday night and we were all in Dalaran making our way to Violet Hold.

Actually, only four of us were in Dalaran.  I was waiting somewhere else.  WoW still crashes on my machine when ever I get too close to Dalaran despite having installed a variety of drivers, swapped video cards, shut down every extraneous system process I could find, updated the BIOS on the motherboard, tinkered with the clock settings on the video card (turning them down seemed to give me an extra minute or two at one point, but it may have just been situational), and installed WoW again fresh.  And the more people in Dalaran, the quicker the crash happens, so prime time on a Saturday night is Dalaran crash central time for me.

So the other four went into Dalaran, got the quest for the Violet Hold key, picked up the key, and then got an instance for us.  I had already gotten the key and the quest lined up on our iMac earlier in the day.  Once they were in the instance and set I used my hearthstone to recall to A Hero’s Welcome, one of the Inns, and attempted the run  roughly a quarter of the way across the city to the instance.

And I crashed in about 30 steps.  Bugger.

And when my system crashes in Dalaran I have to reboot.  Something… the video card, the drivers, the OS… something in the system needs to be refreshed after one of my Dalaran crashes.

After the reboot I managed to make it the rest of the way and into the instance.  I asked to be added to the Skype conference call (no point in asking before I got safely into the instance) and we got ourselves ready.  Our group was:

As is usual, and despite some warnings in past comments, we went into Violet Hold without any research into the instance.  All I really knew was what what people mentioned in comments along with the warnings to read up on the instance in advance.

We were there, and it seemed a bit busy even as we arrived.  There was a bit of an NPC battle going on right there on the steps in front of us.

We join the action in progress...

A Lieutenant Sinclari was standing there facing us.  Ula went to talk to her.  She went a little too far in the dialog and suddenly the good Lieutenant (not Harvey Keitel) was announcing in a yell that her team was pulling out.  I read her yell aloud over Skype, “We’re pulling out….”

Ula Heard me and thought we were leaving the room so trotted along after Sinclari and her team just in time to be on the other side of the doors when they closed and sealed.  A familiar counter popped up on the screen.

A portal opened up with a portal guardian standing at it.  Mobs began showing up from the portal to attack us at the top of the stairs before the door.  We killed them while trying to figure out what to do about Ula.  Bung tried to summon her to us which took him off of offense.  Meanwhile another portal opened.  Then another.  Soon we were swamped and slain.  Oops.

Round 1 to the bad guys.

Fortunately, running through Dalaran as a ghost does not seem to bother my video card.  We ran back to the instance, got to the locked door at just about the time the bad guys broke through.  Seeing a mass of them running straight at us I thought we were in for another wipe.  As they hit Vikund let off a consecrate hoping to take some down, but they just ran past us.

The encounter reset.  Lieutenant Sinclari was waiting for us again. We decided to read up a little about the encounter.

Slightly more informed, though we had already guessed a good portion of the basics of the event, we spoke to Lieutenant Sinclari, this time with everybody on the correct side of the door.  When her team pulled out, we moved to the middle of the main floor and waited for a portal to open.  One did to the immediate right of the stairs, behind us as we stood.

We turned to face it and when the portal guardian showed up, Earl hit him with such a mighty charge that he disappeared.  I thought perhaps Earl had knocked him back into the portal.

Instead the guardian actually fell through the floor.  We were able to coax him up a bit so that he was visible, but he was bugged at that point.

We could hit him once in a while, but then he would start evading and reset.  Meanwhile his portal kept spewing mobs and other portals opened while we tried to get him unstuck.  Again we fell under a sea of hostile forces. 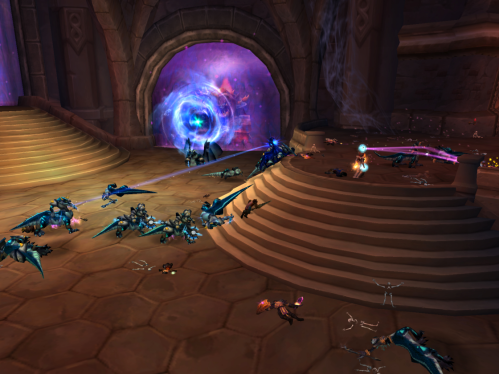 Round 2 to the bad guys.

Back again in time to wave at the ravening pack as they broke down the door and ran past us and into nothing.  We joined Lieutenant Sinclari at the top of the steps yet again.

This time around we started the event and were a bit careful about pulling portal guardians.  No more charges.  Call it paranoia.

And, paranoid or not, we went through the first five portal groups just fine and hit the sixth, which meant the first boss fight.

We fought him like we would fight any boss the first time around, straight up tank and spank and don’t spare the DPS.  He ate us alive.

Round 3 to the bad guys.

Back again with the ever patient Lieutenant Sinclari, we read up a bit on Xevozz, just in case we drew him again, then started the encounter up for another run.

Again, we got through the first five portals just fine and when the sixth came up it was Xevozz!  The recommend tactic with him was to kite him around to keep him away from his ethereal spheres.  If he stays by them they rev up his damage and a wipe ensures.  We managed to keep him in motion, though line of sight issues plagued Skronk as he tried to keep everybody alive.  Still we managed.  One boss down and a short break.

Xevozz was good enough to drop the Riot Shield which turned out to be a big upgrade for Earl, so we all passed and he strapped on that barn door.

Second verse, same as the first; we tore through the next five portals and got to the next boss, Lavanthor, and enormous core hound.

Lavanthor must mean "big" in some language

Vikund put up the his fire resist aura and we went after him, bringing him down without much drama.  Lavanthor left us the Prison Warden’s Shotgun as a drop, another upgrade for Earl, being the only gun user in the group, and making a nice companion for the Riot Shield.

Which left just five more portals and then the main event, Cyanigosa!

Cyanigosa appeared to be a pretty standard dragon fight with the expected breath and tail sweep action.  We lost Bung part way into the fight on a random shot, which caused a bit of anxiety, but we managed to power through and bring her down.

She ended up dying in a rather awkward position, head buried in the allegedly solid floor.

And, as a drop, we got the Plate Claws of the Dragon which went to Earl, giving him a trifecta.  But in a group like this, when the tank wins, we all win.

As we left, Lieutenant Sinclari gave us a pat on the head and told us her team would be able to take over.

Wow, thanks!  Don’t get your uniform dirty or anything!

And so we finished up in Violet Hold.  We didn’t get any of the additional achievements, but the run is short enough that we might go back for another try.  There are other bosses to play with.

The run was short enough, in fact, that we decided to run out and give the Amphitheater of Anguish a try. (I think I saw The Ramones play there back in ’84.)

Running around Dalaran to the flight point caused my video to lock up again, but only after I got on the bird out to Zul’Drak.  The funny thing is, the game is quite clearly still going.  I could hear the wings of the bird flapping and the sound of coins when we passed flight points, but to see anything I had to reboot.

Once back, we found the Amphitheater, stopping along the way to hit the Midsummer quest points for alliance and horde.

There was a horde group already doing the Amphitheater when we arrived, so we got to watch a couple of the battles.  We couldn’t communicate with them, but when they had a wipe (druid tank, not much healing) we jumped in to try it out, then alternated with them.  Or tried to, in any case.  They tagged one of our bosses before we did at one point, but I couldn’t tell if they were trying to help, trying to hurry us along, or just trying to be annoying.

We got through the six battles, though not without a caster casualty now and again.  We lost Ula and Bung on one fight.  But in the end we got to collect on each victory, which amounted to a decent pile of experience, 19-20 gold, and, for the last fight, a nice weapon.  Vikund picked up the De-Raged Waraxe as his new main weapon.

After that I called it a night, thinking that my wife would be in bed.  The rest of the group went off looking for some more experience while I logged off.  Then I found that scrapbook and martini night was still going on with my wife and a couple of her friends sitting out in our back yard still chatting.  A late night for that group, but it was still hot out and we had no plans for Sunday.

The next instance on the list is Gundrak, but this coming Saturday is Independence Day, so I am not sure if we will have a full group, or any group for that matter.  We shall see.