It was Saturday night and I was again unsure if we were going to be able to get our group together and into the next instance on the list, Azjol Nerub.  Bung was running late and when we went to enter the instance to start clearing just to get things in motion, we were greeted with one of Blizzard’s current favorite errors:

We got this error repeatedly over the course of about 15 minutes, so we occupied ourselves with leftover Noblegarden items.

After jumping into the instance portal over and over while we waited, we eventually managed to get ourselves into Azjol Nerub to start our preliminary work.  We cleared a few groups until we rounded the first corner and saw the first boss, Krik’thir the Gatewatcher.  He had three groups of three in front of him we thought we would clear out so when Bung got on we would be ready for that first boss fight.

If you’ve done the instance, you know that we didn’t do any research.

As it turns out, those three groups are part of the Krik’thir fight.  Tagging one group starts an event where you get each group in turn then Krik’thir in series.  Not an overwhelming battle unless you are short a person and aren’t ready for a full battle because you’ve not even bothered to take off your bunny ears. 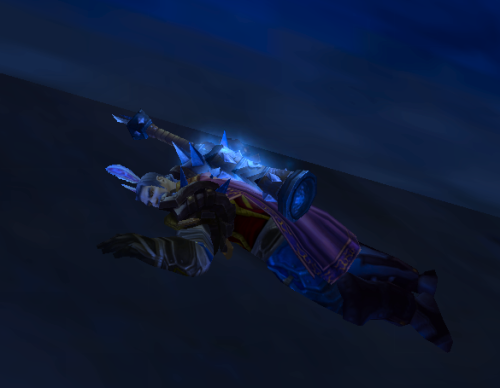 The group in Azjol Nerub is not taking the game seriously!

Does it count as a wipe for the group if you haven’t technically started yet?

Still, even though we had not gotten very far into the instance we managed to knock off the first quest, Don’t Forget the Eggs.  So we turned that in for upgrades to our hand wear all around.  That quest was also enough to push Vikund to level 75.

The we went back in, got ourselves ready, and waited for Bung. 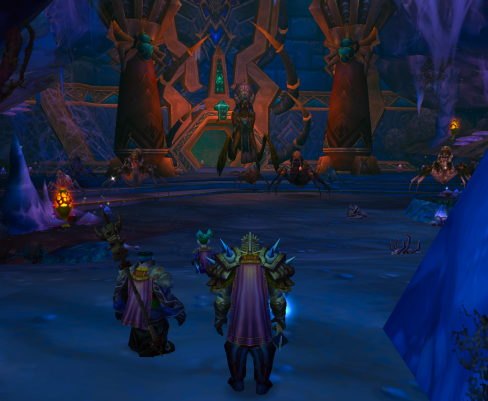 Who watches the watcher? Us!

Bung showed up just a few minutes later and our group was complete and ready to go:

We went and wiped for real on our first full fight with Krik’thir.  I guess that happens when you warm up on a boss fight.

Fortunately we only needed a single warm-up fight to get our act together and bring down the watcher. 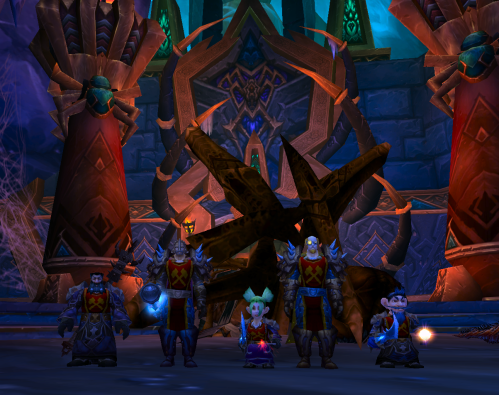 Krik’thir was nice enough to drop the Exquisite Spider-Silk Footwraps, much to the joy of our cloth wearing group members.

Then we started looking around for the next boss.  We wandered around and found ourselves at a dead end it seemed.  We could see spiders running around below us, but were not sure how to get at them.  Eventually we figured out that you could walk down the spider webs arrayed around the dungeon, giving Azjol Nerub a very different feel from the classic “feet on stone” dunegons we have generally encounter.

Climbing down the web

Moving down the webs plonked us into the midst of a bunch of spiders, including the next boss, Hadronox.  We were not really paying attention to him as we pulled one of the closer spiders only to find we were in another event that lead to the boss fight.  We were not quite ready for that, but went with what came at us and ended up the last group standing, sending Hadronox, his minions, and the Scourge that were attacking him off to their respective makers.

We were back to the usual “leather and mail” loot drop routine with Hadronox.

The second boss out of the way, we started looking for where to go next.  After running around on the webs for a bit and zapping the occasional spider, we ended up around a hole in the floor.  A hole so deep that the bottom was not visible.

Earl, wearing an engineering parachute cloak, jumped into the hole, fell slowly for the 10 seconds that the cloak lasts, then fell freely for even longer until he hit a body of water far below.

With Earl down and safe, we all jumped into the hole.  Another interesting twist in Azol Nerub. Skronk falling down to us

Down at the bottom, we wandered around a bit until we found our way to Anub’arak. (A new Barack?)

Not the oval office

Our first run at him was less than successful.  Another wipe.  Like the other bosses in Azjol Nerub, Anub’arak isn’t so much a fight as an event and you have to be in his circle to participate.  Unfortunately, the casters were all outside of the circle, which lead to Earl and Vikund being killed in rather short order.  Then the barrier went down and so did the casters.

Fortunately we had a soul stone availabe and could revive on the spot.  Not that I would have minded another jump down the rabbit/spider hole, but it is a bit of a run to get there.

The second time around with all of us inside the circle the event went our way.

Anub’arak was down and the instance was defeated.

However, it was a bit early in the evening still, even with a late start, and we felt had a good 45 minutes to an hour left in us.  So we thought we would take a peek into the next instance on the list, Ahn’kahet: The Old Kingdom.  It is only 100 yards or so from Azjol-Nerub.

There we managed to fight out way into the first boss, Elder Nadox who, unlike Krik’thir, isn’t practically within sight of the front door.  He, however, stopped us cold.

I’m not so sure we weren’t capable of killing him as much as we were at the end of the night and perhaps did not have as much fight left in us as we thought we might have.  But he was an extra credit assignment this time around.  He will be the first target for our next attempt.