Liberty Squad is a group in the Imperium that runs in US time zone.  Formed mid-2018, the stated goal was to be something akin to Space Violence, a EUTZ squad meant to go find content for line members during peace time. 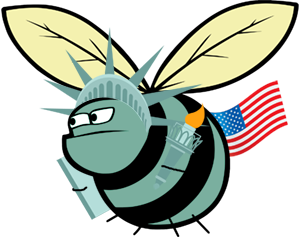 Liberty Squad is not the first USTZ group with a pseudo patriotic name.  Back in the day there was Freedom Squad.  I flew with them some, but never joined because their fleets were open to and pinged out to everybody.  However, Freedom Squad dissolved and some of the team running that ended up forming Reavers from the remains.  I jumped on board that a little over four years back when recruitment was open to all.

Since then Reavers has become more difficult to join.  You need a vouch in from a current member in good standing with the notice that if you vouch in somebody who ends up being kicked for cause, you’ll likely be kicked as well.  While Reavers often operates in USTZ, it isn’t a group you can just join.  Reavers can also run hot and cold.  I spent most of 2018 docked up north in the long running Reavers deployment in Pure Blind.  When Reavers are active, it isn’t a casual operation.  And when we’re not, the group doesn’t do much otherwise.  Especially when Asher is out directing operations as the Imperium Sky Marshall during a war.

So Liberty Squad was formed to fill something of a gap in the USTZ.  Unsurprisingly, the leadership and members overlap with Reavers to some extent.  With Reavers quiet since the Hard Knocks wormhole operation I decided to sign up with Liberty Squad to see how things went with them.

My application was accepted without comment, which tells you how low the bar is at the moment.

Last Wednesday night was the first op that came up while I was around.  The fleet formed up on Thomas Lear, a familiar voice from Reavers.  He used to FC Reavers ops a while back.  In fact there were a number of familiar voices and names from Reavers.  I was not the only one looking for some USTZ ops while Reavers were idle.

The doctrine was the Jackdaw fleet.  I had a Scalpel handy, the tech II Minmatar frigate logi ship, so joined up with that to go wherever we were headed.

We first headed up into Aridia, where a wormhole was waiting to take us north. 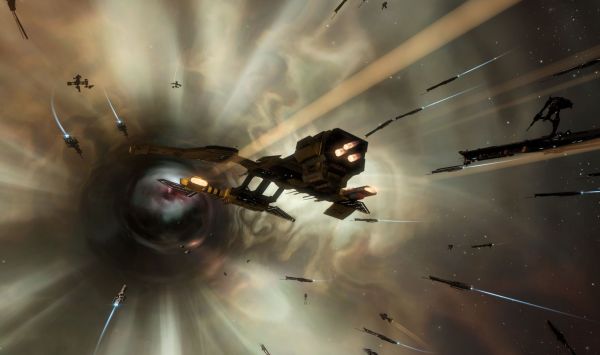 Scalpel headed to the wormhole

We popped out in low sec space and made a run through high sec to get Oijanen, a low sec system in The Forge that adjoins BWF-ZZ in Geminate.

BWF-ZZ always rings a bell to me as it was the system where I got on my first supercarrier kill mail.  That was almost seven years ago. (Also, I am pretty sure the Megathron in the first screenshot in that post is Baltec1.)

These days BWF-ZZ is the gateway system to the home of Pandemic Horde.  We were just passing through to go try to blow up something of theirs.  We slipped into their space and headed to NQ-9IH where an Ansiblex jump gate waited for us.

The jump gate had been reinforced, so it was offline.  The final timer for it was ticking down as we arrived and we were there to shoot it once the clock was done.

A bomber fleet had come along as well to provide more firepower.  The hope was that the Jackdaws could handle whatever Pandemic Horde would throw at us to defend the gate.  However, the locals had other plans.

The first defender to show up was a Broadsword, the Minmatar heavy interdictor.

We were happy enough to light out after him, trying to hold him down for a kill.  And then he lit a cyno and some hostile dreads started dropping in on us.

Dreads landing as the Broadsword goes up

While we were able to destroy the Broadsword, a second cyno was already up and it looked like Pandemic Horde had invited some friends to the party.  Pandemic Legion and NCDot were both there in some force and it quickly looked like that Ansiblex jump gate would not be getting blown up.

Thomas Lear decided to pull us out and we headed back towards BWF-ZZ.

However, the hostiles bridged there ahead of us and had the gate to Oijanen and escape bubbled up and camped.  We would not be going that way without taking heaving losses getting to the gate.  In addition our wormhole home was also that way.

Intel indicated that there was another wormhole options available to us.  We just had to move fast to stay ahead of the defenders.  With the Jackdaw fleet speed wasn’t a problem, but there was always the probability that the enemy might figure out where we were headed and bridge ahead of us again.  So off we went, jumping into a system aligning, and being warped to the next gate to do it all again as quickly as possible.

We were headed deeper into hostiles space, up into the Vale of the Silent and the system AZBR-2.  There, in Pandemic Legion space, was a wormhole to Thera.  Thera, the big shattered wormhole system introduced with the Rhea expansion back in 2014, always has multiple connections to normal space, and so can act as something of a transit hub.  In our case, if we could get into Thera, there was another connection that would drop us into Cloud Ring, closer to home and relative safety.

While we were shadowed by the locals almost all the way, their main fleets did not managed to catch up and we were able to slip into Thera and back out as we had hoped.  From there we just had to get to our own jump gate network to take the quick ride through Fountain into Delve.

The new Eye of Terror, running from Querious up into Cloud Ring, is living up to its predecessors.  Without any jump fatigue accrued, fleets are using it to zip up north and back in very little time.  This is apparently causing GSOL a bit of a headache as they have to refuel the gates with liquid ozone more frequently than the old jump bridges.  We made our own run down it into Delve without issue and ended up back home without further incident.

And so ended my first op with Liberty Squad.  It wasn’t exactly a rousing success, but most of us got home safe and there was a bit of adventure along the way.

Meanwhile, I suspect that I will be headed up to Geminate again in the future.  It seems like Pandemic Horde will be the next location where Imperium SIGs and squads go to find content.  Space Violence is already reported to be in the vicinity.

…and fly it out from VFK-IV to BWF-ZZ, a trip that would normally be 36 jumps, in less than 15 jumps.

The most direst route via gates

All to get another jab in at Raiden.  The war may be over, but I don’t think anybody said anything about peace.

Getting from VFK-IV to BWF-ZZ quickly was a big part of the operation, part of the planning that had to be laid out in advance.

In the end it meant having some cynos and a titan handy.

Burning to the titan

Welp fleet in low sec space… it is so bright!

Then there was a run through high security space, so some people there got to see 150+ ships jump through their system and cause time time dilation to get invoked.  I do not think we lost more than a ship or two to CONCORD firing on people with low security status.  My own security status is 5, so I had no problems.

After the run through high sec space, we assembled in the low sec system one jump out from BWF-ZZ, then jumped in to join the party.

The party consisted of a Raiden fleet, including some capital ships, attacking a Brick sQuaD system.  Brick sQuaD, per the plan set up in advance, bubbled up the Raiden capital ships, while Ev0ke and Ewoks, annoyed at being reset by Raiden, joined in to defend the system.

And then we showed up with a welp fleet of Hurricane battlecruisers, bringing that extra bit of fire power, and we all got down to killing Raiden capital ships. 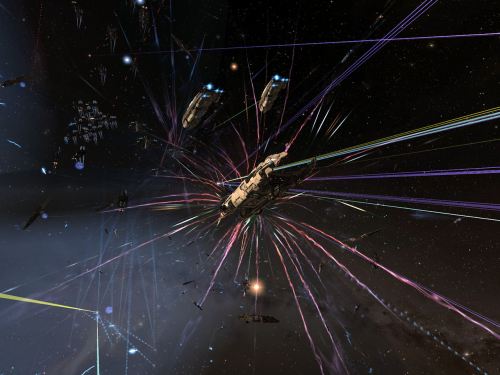 My own kill board shows six carriers, 5 Archons and a Thanatos, as well as six supercarriers, two Aeons and four Nyx, destroyed, along with a few lesser ships.  The smaller ships killed were trying to put up cynos for the most part, so Raiden could bring in reinforcements.

Nyx formation bubbles and under attack

Reinforcements were coming from Northern Coalition, but the lack of a jump-in cyno meant that they had to take the long way in.  Meanwhile, we continued working on Raiden capital ships. 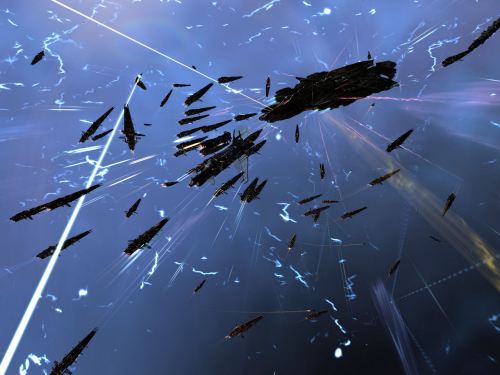 Bumping a Nyx… they love to be bumped

All dead in under 40 minutes.

After that, just as Northern Coalition reinforcements began to show up, DBRB had us ride off into the sunset, our mission accomplished.

Welp fleet warping off to other tasks

I also created a short video about the trip and battle.  Not very detailed, as usual, but my plan is more to give people a feel of what the battle looked like.

Direct link to the video here.

So off we went.

The battle was not without problems.  Old habits die hard, and a few of us shot… and no doubt killed… some of temporary allies for the battle.  Sorry about that!  But the net result was a blow against Raiden.

Because we were in the neighborhood, DBRB had us jump a few systems over to mess with a SOLAR FLEET operation in the system CFYY-J.  That did not go as well.  We ended up losing some ships to a bombing run and ended up leaving with only a single kill.

Still, we were way up for the day when it came to ISK destroyed.

DBRB got killed and podded in that last fight.  So we were let off the leash to burn for home, which we had to do the old fashioned way.  It was more than 30 jump gates back to VFK and home, but we got through safely.  When you are traveling in a pack of 100 ships, most gate camps just step aside and let you through as long as you do not stray too far from the group.

This is, as usual, my view of the battle, just what I saw on screen and heard on coms.  A far more detailed version of the battle is available over at EVE News 24.  (The picture in that post is from me.)

There is also a “UI on” video of the battle as well.

Needless to say, DBRB was unbearably smug for the rest of the day.  Even The Mittani got on coms during the fight to commend the operation.

All in all, another adventure in null sec.  Now I just need to get in on a titan kill.