While I don’t get things like free accounts and the like, I do occasionally get press releases for games.

I don’t mind.  The obligations are low and sometimes something interesting or amusing shows up in my inbox.

I got one such today.

It needs a bit of back story to even be comprehensible.  It will probably be amusing to maybe three people total.

Back in my TorilMUD days, especially during the last round of it being called Sojourn and the current incarnation of Toril, there was a group of people who played that I used to refer to as the Emporia Mafia.  They were a group of students in Emporia, Kansas who all went to Emporia State University.

But they weren’t a group that started playing together.  Some knew each other, but not all.  It was more that the MUD seemed to pick up an unusually large following from this particular University.  And it isn’t actually a big school.  It is roughly one tenth the size of my own alma mater, which produced, as far as I know, only a single adventurer in the game.

So today I saw in my email the following subject line:

My first thought, after a chuckle, was that this must, somehow, be related to the Emporia Mafia.

However, the subject line was truncated by my mailer.  The full subject, once I opened the email, actually read:

Not quite as amusing.

Still, it does make me wonder now if there is any involvement somewhere by someone from Emporia State.

Gaff always says that Emporia is the true center of the Universe, though he tends to follow that up with the fact that R. Lee Emory is from Emporia.  Certainly it gives the place distinction, but….

And, just in case you were interested in the full Dragonica Online press release, here it is: 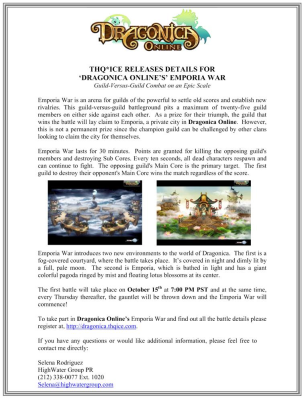 Dragonica is a free to play, item shop funded, side-scrolling fantasy MMORPG that Tipa has mentioned a couple of times over at West Karana that I might not have ever mentioned had it not been for the oddball Kansas connection.