After another side trip to the Outlands last week, we were ready again to assail another instance in Northrend.  Our target for the night was Drak’Tharon Keep, and out line up was:

Drak’Tharon was a troll keep at one time, but now the scourge appear to have taken it over.  Reminiscent of Gnomeregan, as you approach the instance, an endless stream of Drakkari trolls can be seen fleeing the area.  They materialize just shy of the summoning stone outside of the instance and run down the steps and into the woods, where they disappear.  While their names are in red, they do not appear to be aggro and will just run past alliance players.

We spent a little bit of time with the now familiar “too many instances” issue, but were able to get our own version of the keep after about a minute of jumping in and out of the entrance swirl.  Once in we got our first look at the decor.

Vikund has been eating those pirate treats again

There being undead and the like running around meant that Skronk and Vikund were on crowd control patrol for some parts of the instance.

We did not have to go far to get to the first boss, Trollgore.  He appears to be locked in his own little battle when you show up.  But you don’t have to wait, you can step to the front of the line.  The fight with him was not very dramatic.  In fact, it was rather straight forward, barring the other NPCs running around during the fight, and we did him in pretty quickly. 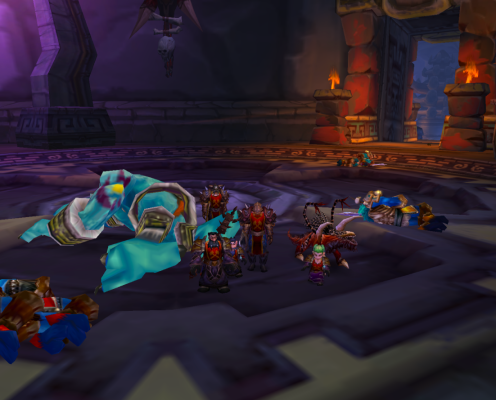 He dropped a very nice weapon for Vikund, the Troll Butcherer, a 2 handed sword that was considerably better than the mace Vik was carrying.  Vikund’s 2 handed sword skill was only about 100, so he had some work to do before he could use if effectively, but that would come in time.

From Trollgore we moved into an area of spiders.  They were easy enough.  We decided to go after the struggling forms bound in spider webs in the room and were rewarded with a quest update.  Some of us had done a few of the lead-in quests for the instance, but had not really been paying attention.  Our usual formula of leaving no potential witnesses stood us in good stead.  The quest update sent us off to kill the next boss, Novos the Sommoner, who was conveniently just in the next room.

Novos, not yet summoning

We suspected that, with the suffix, Novos might have some special tricks up his sleeve.  But we’re always game to just go after a boss on the first run just to see what he does.  What Novos does is put up a shield that makes him immune to damage and call in the cavalry.  Before we could adjust, we were down.

We had seen a similar routine with Elder Nadox back in Ahn’kahet, so we figured it was time to concentrate on the adds and see what developed.  Sure enough, once in a while an add would come along that would, upon dying, turn off one of the four crystals around Novos.  These seemed to be the power behind his shield.  Soon enough Novos was without his shield and we stepped in and finished him off.

That let us move along and outside to possibly the largest raptor model I have ever seen in the game, a brute by the name of King Dred.  KD has his own herd of smaller, but still elite, raptors hanging around.  A raptor posse, if you will.  We cleared out some of the nearer small raptors then took on KD.  And at that point we found out that he calls on his little friends during the fight, which tipped things in his favor.

We came back after the wipe and finished clearing things out and went after him again.  Things went much more smoothly without additional raptors howing up mid-fight.

King Dred dropped another good item for the group, the Stable Master’s Breeches, a caster item coveted by all of our cloth wearers.  A roll off sent this new piece Skronk’s way.

After King Dred we were climbing stairs, headed towards the top of the instance where the last boss lives.  After clearing out the way, we ended up withing reach of The Prophet Tharon’ja, the last fight in the instance. 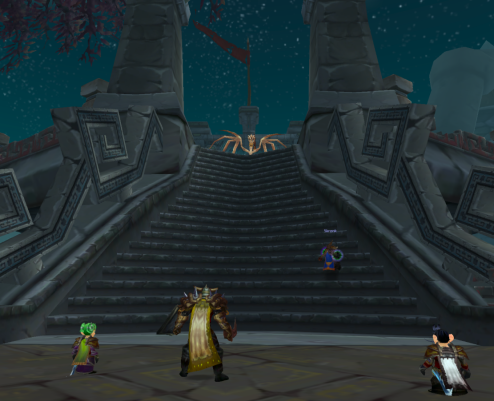 Up the stairs awaits The Prophet

We got ourselves squared away and Skronk did a ready check to see if we were a go.

The ready check generally startles Ula and puts her in a fighting mood.  We all said yes, so in we went.

The fight was fun, maybe one of the most enjoyable fights we’ve had in a while.  Every so often during the fight, Tharon’ja calls out and turns the whole party into undead.  Everybody so affected gets a new, limited set of attacks on their quick bar while the effect lasts.

This did not seem to degrade our ability to fight by much, nor did it make us much more vulnerable, so we just ran with it and chased him around looking like a bunch of skeletons.

We're undead while Tharon'ja is mortal

Fun is fun, but eventually the fight came to a close with all of us standing and Tharon’ja down.  And when the main boss goes down, the achievement comes up.

So there we stood again at the end of another instance with main boss down and some loot nobody really wanted.  Muradin’s Lost Greaves were not bad, but neither were they an upgrade for Earl or Vik.

And so we wrapped it up.  The way out of the instance was around the back of Tharon’ja’s high seat, the now somewhat common jump down in to a conveniently placed body of water.  Not a bad night all told.  There were a couple of decent equipment drops for once, plus Ula and Vikund hit level 77 along the way.  Vik just has to get out and practice with that new blade.

The next instance on the list is Violet Hold in Dalaran.  We’ll see if my “crash in Dalaran” issue will allow us to actually get into the instance.