Back to Westfall with four worgen and one gnome.

After last week’s character roll-up and parallel play experience, it was time to form up and start running through the world as a group.

In Stormwind, at the bulletin board in the middle of town, there is a quest that leads you to Westfall.  There has been a crime committed, a murder most foul… which seemed a bit silly given the huge amount of killing going on all over Azeroth, but you follow the story where it goes.

And Westfall has been re-wrapped into a new story.  There always was a story to Westfall, one that lead you eventually to the Deadmines.  There were also many side-quests.  Now though, almost everything leads you down the path that is the new story in Westfall.

Old Blanchy is dead, along with the Furlbrow’s.  That is where things start, which was a pretty emotional moment for some, since we combine a group of animal lovers with the nostalgia prone, and poor Blanchy, whose shared his (her?) blanket with us, and was a fixture in Westfall from the beginning tugged the heart strings of both factions.  The Furlbrow’s and Blanchy were usually the firsts quests people found in Westfall. 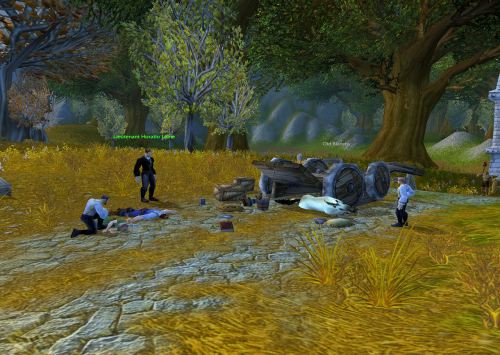 The scene of the crime

With the Defias gone, who could be behind this?  Yes, sure, there are lots of cutpurses and thugs running around… but they are unaffiliated criminals.  The Defias had been broken with the death of Edwin VanCleef and exist no more.

We arrived at the crime scene are were immediately drafted to help out.

Our group for the investigation was:

The quest line include both new and reworked original quests.  There are quests related directly to the investigation, like eavesdropping on some thugs. 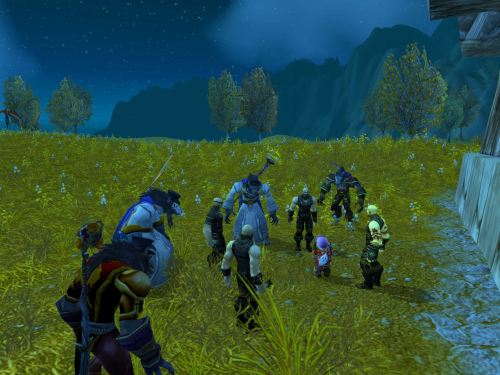 Go on talking, don't mind me and my dogs

While at other points we were killing murlocs and gnolls in order to gather evidence of dubious value.  What the hell do murlocs know? (Though they still drop that pirate treasure map… maybe that is why they send you off to kill a few.)

We did still have to make Westfall Stew, though collecting the Okra was a bit easier.  However, now when you finish the quest, you end up with a whole cauldron of stew which you then use to help feed the Stormwind refugees who are now all over the zone.

And while we did have to kill many harvest bots, as before, we did get a chance to ride around in our own bot to do at least some of the work. 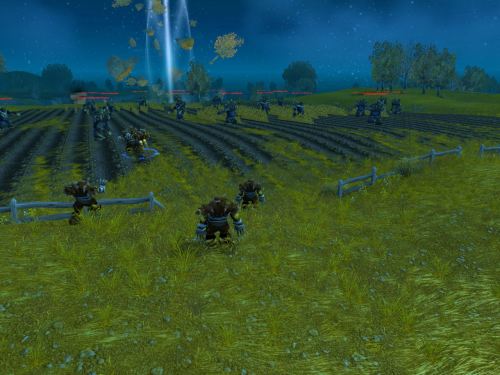 Lining up the group to clear the field of harvest bots

Gone are some of the more annoying quests from the original zone.  Specifically, the ongoing series of quests where you have to kill x number of Defias type A and B, then C and D, then E and F, the G and H and a few of I.  Those are gone and good riddance to them.  While we could have knocked those out easily enough with the five of us, it is a lot of running back and forth and the like.

One side quest that is still there is the one to get the Westfall chicken pet.  We got distracted by that for a while as we made chicken noises at the local chickens we had an annoying tendency to get killed by the local coyotes at just about the point when their quest opened up.  Macros were soon deployed to assist in this. 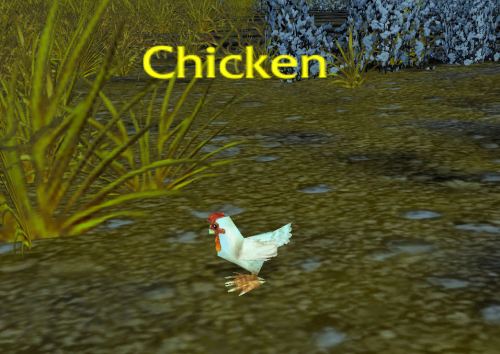 We kept up with that until four out of five of us had the chicken, then it was back to the main quest line.

Observing and reporting back is now one of the key parts of the quest line in Westfall.  You go observe some of the story unfold, then head back to report in on what you saw.  At one point we were given the classic box disguise to use to observe a meeting in a mine that involved a shadowy figure and Glubtok the mine foreman. 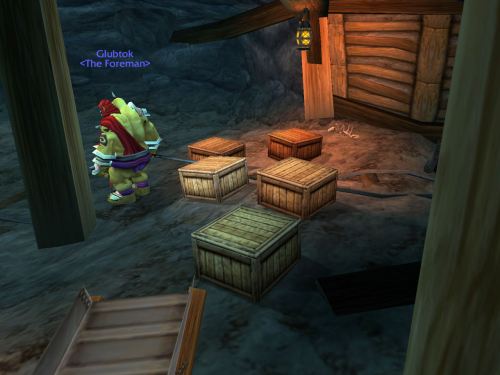 Just ignore those five extra boxes behind you

This sort of thing lead us all over the zone. Between the few side quests and the main quest line, we were pretty close to having the exploration achievement complete.  We ended up all over, from the lighthouse at one end of the zone to the tower, from one of the rogue class quests, at the opposite corner.  (You even get to sneak like a rogue through that tower, while being covered by a sniper in a ghillie suit who will bail you out with a well timed head-shot if you get in over your head.)

Eventually though, you have to head to Moonbrook.  And in the spirit of reworked Azeroth, Moonbrook has its own flight point now. 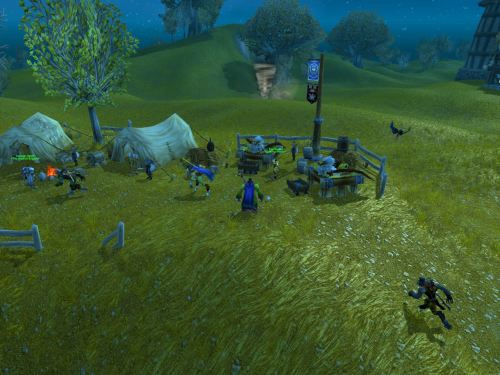 Can't we see the Sentinel Hill flight point from here?

Moonbrook is the center of the Westfall experience, housing as it does everybody’s favorite instance. 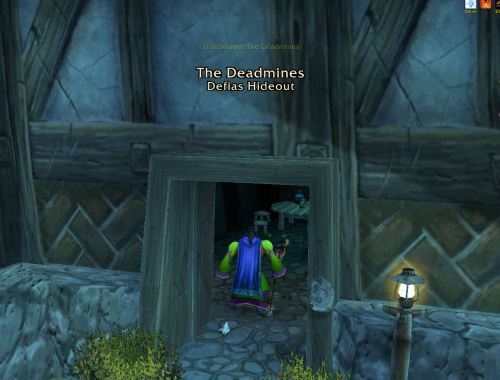 I discovered this more than five years ago

The Defias sign is still on the door I guess, in foot high letters saying “Hideout Here” to anybody who gets within range.

A bit of phasing goes on in Moonbrook.  In fact, it goes on throughout the quest line.  However, Blizzard seems to have gone with a much lighter touch when it comes to phasing.  It seems more organic to the zone than it did in some of the Northrend phases when a tower suddenly appeared or an army was suddenly wiped from the field before an outpost. 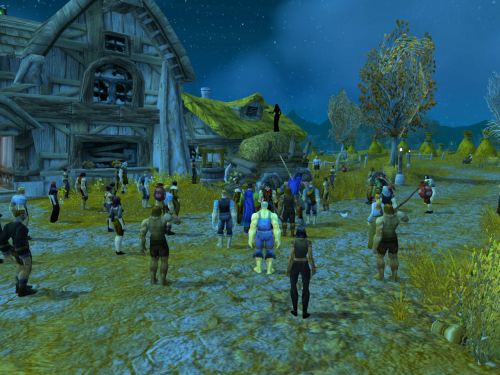 Worgen and Top Hats... we fit in well with this crowd

There the shadowy figure, quite clearly female by this point, harangued the masses with a decidedly leftist agenda.  I’m surprised she didn’t adopt Lenin’s “hailing a cab” pose, so often replicated in the former Soviet Union.

We listened, got our update, and reported back to… well, the Stormwind version of the Okhrana I suppose (though without the fancy hats which generated such hate towards the Tsar)… probably SI:7.  They never really identified which organization they represented.  A bunch of patsies we are, I suppose.  They say go spy for us, or kill for us, with some sort of unlikely cover story, and we go do it without question.

We were the directed to actually go to the Deadmines.  We were told we could find it by following the trail of homeless people.  So there might be a reason that Marxism is gripping the masses in Westfall.  The social safety net of Stormwind seems pretty tattered.  Heck, they are getting random strangers to make food to feed the homeless rather than setting up some sort of organized food relief program.

And the foyer to the Deadmines was, in fact, teeming with homeless.  But eventually we reached the instance. 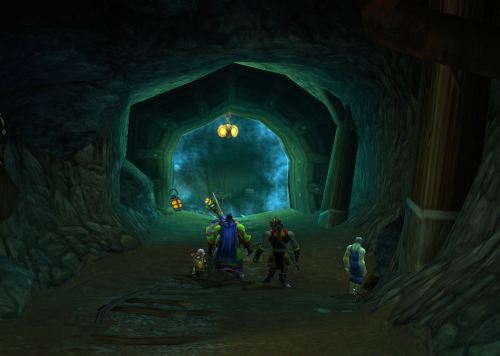 Follow the right wall and you'll get there every time

Inside though, the place was another crime scene.  It was crawling with Stormwind guards.

But we weren’t there to comb the scene.  We had been given a magic dingus that would allow us to travel in time so that we could view past events in the Deadmines.  Specifically, the defeat of Edwin VanCleef.

A grey and misty view of the battle played out before us, made more compelling by the fact that the group fighting VanCleef looked very much like our group from the first time we brought him down, back in 2006. 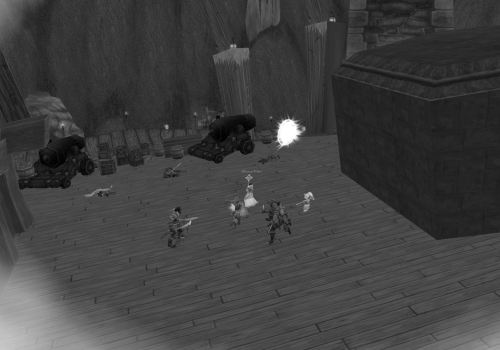 Battles from the Past

We watched a human warrior, dwarf rogue, gnome mage, along with a hunter and a priest, fight that famous battle.

And, as the victorious group looted and left, something else happened in the scene.  Somebody else was present, and we (along with everybody else who ever did the instance successfully) missed them.

We took this information back to Sentinel Hill and reported in.  But we were too late with our news.  The mysterious figure stood revealed… the figure we saw at the end of the scene from the past, only changed… and not for the better as far as Stormwind was concerned. 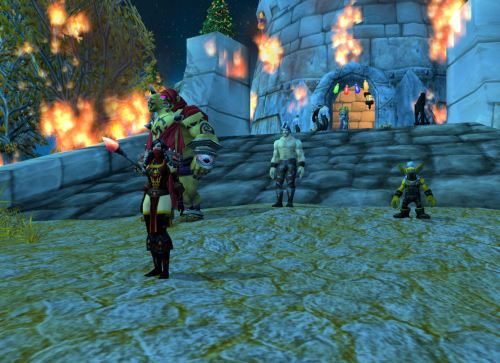 She challenged the authority of Stormwind. (We tried that once.)  But who was she? And how many people will dress up like her for BlizzCon next year? 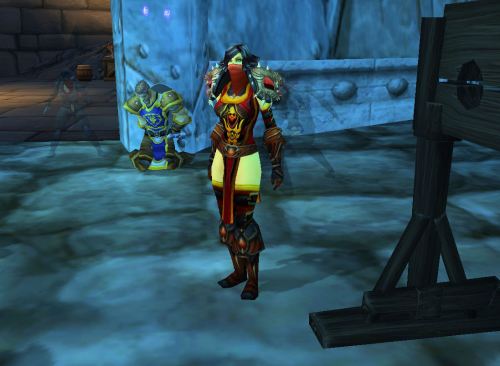 No longer shadowy, but still a mystery

Well, you find out who she is right there, but I won’t spoil it.  Not yet, anyway.

As Sentinel Hill in Westfall burned, we headed back to Stormwind to inform the king of these events. 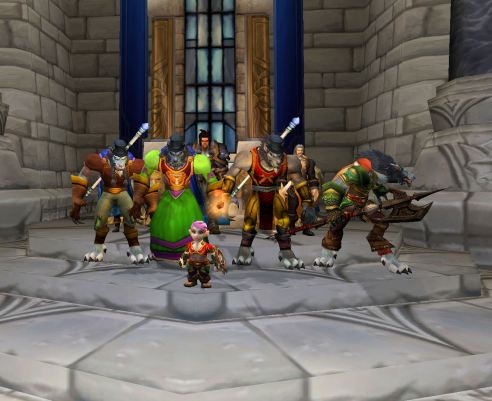 Back in Stormwind with the King

Of course, the King wanted us to go investigate further, which meant a trip into the Deadmines.

Only we were about done for the night at that point, so we will get to the Deadmines on our next outing I hope.  Though with Christmas and New Years covering the next two Saturdays, it might be a while until we can follow up and get to the heart of what is going on in Westfall.

And then we’ll have the answer to who killed Old Blanchy!  Old Blanchy is core!