I actually got home, had dinner, and was able to log into Diablo III on the first try ever.

Blizzard had the servers down for emergency maintenance earlier in the day, and it appeared to have done some good.  I was able to make my first character, play for a few hours, and form my early impressions of the game.  Those I will cover in another post.

Then after hitting a stopping point, I decided to log out of the game and then try to log back in, just to see how things were holding up deep into the prime time of game play.

That did not go so well.  I did not get error 37, the error that actually trended on Twitter, but another error.  Error 75. 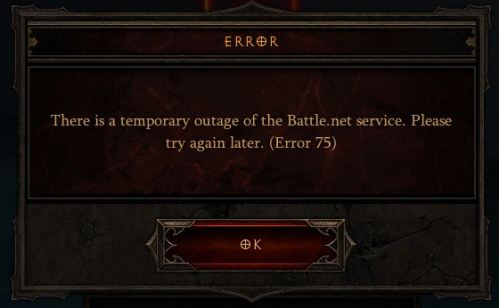 A new error for a new day

I thought to myself how silly it was to log out when things were going smoothly.  But then I heard from a couple of other people that they had been kicked from the game with the same error.  And then Blizzard started announcing that there was a problem on Twitter as well as on the game login screen.

So the peak of prime time, when both coasts in the Americas were heavily invested in the game, seemed to push the system over again.  I went to the forums, to see if just once there might be some more information there, but things seemed to be going badly for the forums as well. 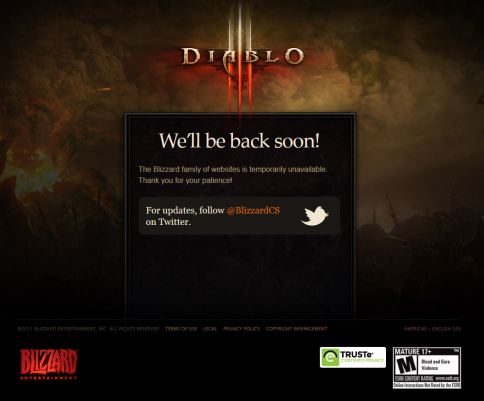 This was the outage that took down World of Warcraft as well as all StarCraft II online play.  The influence of Diablo is vast!

Well, we we are still less than 24 hours from the go-live point, and I have had as much trouble or more playing stand-alone games on launch day in the past.  But these are issues on Blizzard’s side of the fence, and I hope they get them straightened out muy pronto.

I give it until the weekend before somebody starts seriously talking class action lawsuit.