While it has not been that long since our oldest cat Felix passed, it is spring time and thoughts have turned to kittens.

My daughter has been agitating for a kitten for a couple of years now, an idea which was vetoed in the past because we didn’t really want to become a three cat household.

But after Felix’s passing, after some time had passed, there was obviously room in our house for another cat.  Even Oscar has seemed quite lonely since then, as he and Felix were best buddies.

So my wife and daughter started looking for a kitten.  And despite reservations about becoming a three cat household, we ended up with a pair of litter mates, a brother and a sister who are now named Fred and Trixie.  They just came home yesterday.

Both cats were a little nervous when they showed up, but it did not take Fred long to come out of his shell.  He was knocking things over and finding toys not long after he arrived.

Fred and his new favorite toy

Trixie is not yet so comfortable in her new surroundings.  She stays under cover a lot of the time.

Trixie is a little more reserved

We set them aside in my wife’s office, which also serves as the guest bedroom, when we have visitors, and the kitty sun room during the day.

Play time in the guest room

The room is somewhat sparse when it comes to cover, so my daughter and I took an empty copier paper box, cut a few holes in it, lined it with one of my sweatshirts, and presented them with the kitty hotel.

Can we stay here?

I cut a flap in the top of the box which immediately became Fred’s favored door, though he also squeezed through one of the windows at one point.  Kittens can get through remarkably small holes. 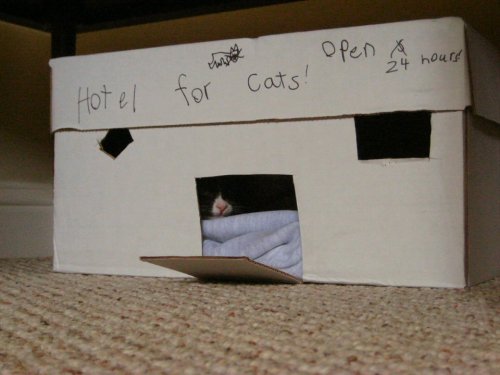 The hotel was a success.  They now have their own cozy spot in which to escape.

So the kittens are settling in.  Now we have to see what Oscar will do.

Oscar perched on the back of an office chair

He knows we’re up to something.  His first response was to hide under the bed.  But when we failed to come get him, he started sniffing around.  Now he wants to know why his sun room is closed and what is making those noises on the other side of the door.

No hissing, growling, or fluffed tails yet.  When we brought Oscar home as a kitten almost nine years ago he bonded with Felix in about an hour.  We hope he will welcome the new kittens the way he was welcomed.

At least until the kittens get loose and begin to stalk him day and night looking for fun.

Felix the cat came to live with us in the Fall of 2000.  We had just moved into a new house and decided it was time to add a cat or two.

Felix was a rescue cat, already an adult when we picked him out, or he picked us out.  Before he came to live with us he had been a feral cat living in the parking lot of one of the IBM facilities off of Cottle Road in San Jose.  There he has been fed by people who worked at the facility.  When it was shut down in 2000, one of the women who worked there picked up Felix and brought him in to be adopted.  She is the one who gave him the name Felix, which seemed appropriate for a happy black and white cat.

At the same time my wife and I had bought a new house and had settled in enough that we thought it was time to add a cat to the mix.  And so we went to the pet adoption fair that was being held at the pet store near us.  There we met Felix, who was warm and friendly and crawled into my lap.  We were happy and the adoption people were happy, as they often have problems placing adult cats.

Once at our house, a strange new environment, he immediately hid under our bed. 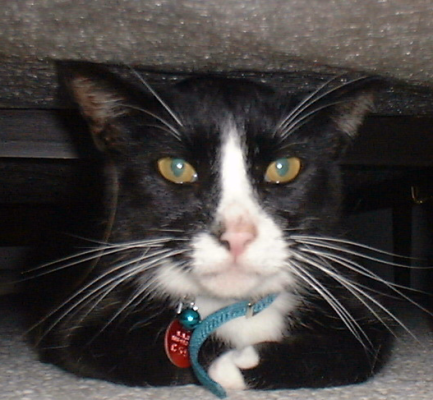 We set stuff up around our bedroom for him, since he did not seem inclined to come out.  However, once WE got into bed, he decided that it was better to be in the bed than beneath it.

A week later we added a kitten to the mix, who we named Oscar, which also turned out to be an appropriate name, as he and Felix were an odd couple.  While Felix was quiet, friendly, and happy to meet everybody, Oscar was aloof, afraid of almost everybody, and loud.

Still, they became the best of friends.

Comfy on my clean shirts

Most of the time, anyway.  Oscar could be a bit pushy.

Not quite enough room for two

Life went on.  Our daughter was born.  Felix found somebody new to cuddle with while Oscar… hid under the bed.  The Felix fan club grew.  Life was good.

A cat in his prime

But time passes quickly.  Last summer, Felix started having health problems.  We never knew how old Felix was.  His early years as a feral cat were undocumented.  But we estimated that he was at least 12 and perhaps as old as 15.

His teeth were bothering him and, while at the vet for that, they found a tumor in his abdomen.    Tests said that the tumor was not malignant… maybe.  Operating did not seem likely to extend his life expectancy, so we decided to make him as comfortable as we could.

He had lost some weight and kept getting smaller and more frail.  In an effort to get him to eat my wife ended up cooking for him.  He would nibble some, but never really seemed hungry enough.

Then last weekend Felix’s health took quite a noticeable dive.  He began to seem quite frail.  He was having trouble getting around.  Food no longer interested him.  The time had come to say good-bye.

We cried a lot.

Even after the first big outpouring of grief, the tears kept sneaking up on us at unexpected moments.

They still sneak up on us now and again.  Even Oscar has been looking for his pal, walking from room to room meowing softly.

Felix was a part of our family.  We miss him a lot.