The first deployment behind enemy lines went well enough.  We dropped into their territory, blew up infrastructure, shot the locals, and dragged back a bundle of loot in haulers we had stolen along the way.  It was a training exercise in order to learn how to run such an operation as much as anything else.  That we destroyed so many towers and didn’t all get blown up along the way was a bonus.

That was supposed to be the extent of our pre-Phoebe activities, a single test run before the expansion went live and our tactics became much more viable.  And then an opportunity arose.

Nulli Secunda announced in their state of the alliance meeting that they would be staying in the north to continue attacking our towers until the very last minute before the expansion dropped.  They would be sticking in low sec system of Tartoken, on the edge of the Lonetrek region and just two jumps out from Pure Blind, one of the CFC held regions.  In this they would be a long way from home. (Map from the usual source.)

In the pre-Phoebe universe, with a huge stretch of friendly territory in the middle and no jump fatigue to worry about, that isn’t all that far.  There is no doubt a jump bridge network across that expanse for the subcaps, while capital ships could no doubt use their jump drives to cross that distance quickly enough.  This situation would be a pickle for Nulli Secunda after Phoebe, but returning home quickly before the expansion was a completely doable operation should they take the option.

So we were sent out to see if we could get them to change their plans and come home early.  We were called up for an operation that drop us into the middle of the Feythabolis region, home to Nulli Secunda and much of their capital ship building operations.  I got online for the deployment, got out my shiny new Basilisk, and we made our way south.

Basilisk on the way

END_OF_DOCUMENT_TOKEN_TO_BE_REPLACED

Lots of big shiny things to shoot way down  in the southeast corner of New Eden.  Cue Jaws sound track…

A place to build caps 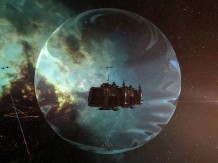 and a matched set…

Of course, they aren’t all there anymore.

I do not think I have ever been this far south on the map.  New space to see.