I think it is a sign that the team is happy being back in Azeroth when we all show up for group night nearly an hour early.

Or maybe we all just felt we needed some additional warm up time.

Either way, our normal meetup time is 9pm and we were all in-game by 8:10pm.  All five of us and not just the three or four who could make it.  It was on like some sort of plumber vs. ape event.  Our official group lineup for the night was:

And the first item on our agenda was to finish up the Wrath of the Lich King expansion.  Last week four of us delved into the final chain of three instances that wraps up the five person content in Icecrown Citadel.  We managed two out of three, with the second one being a bit of a trial for us.  This time around we would go for all three.

Ula, Skronk, and I got out to Icecrown Citadel and used the summoning stone to bring Bung and Earl to us.  Somewhere along the line I guess the summoning stone requirements got reduced to just two people in your group being required to summon.  And so, for the first time in at least two years, we were all together in a group and ready to do an instance in Azeroth.

Hanging around in Icecrown

We planned to run through all three.  We wanted Earl to get the whole show and we figured that since we only had trouble with the final bosses on the first two as a foursome, that being a full group would speed things along.  There was a thought given to trying it at the Heroic setting, but we opted for Nomal given that this was our return venture.

More after the cut due the usual verbosity and over use of screen shots in place of narrative.  Plus I totally spoil the ending if you haven’t done it yet.

END_OF_DOCUMENT_TOKEN_TO_BE_REPLACED

As has been the case for much of 2013, we could only muster four out of five of the group.  Still, everybody has successfully resubscribed, patched, and logged into the game in the last week, so everybody is on board with the idea if not able to be present.  We are going to take another run at Azeroth.

So it was time to get the old team out, our original level 1 to 80 instance group, and do some warm-up exercises.  The planned group was:

However, as Earl was out of town, we had to make do.

Alioto the druid is my latest character substitution into the group.  I had to change out because I ran ahead in levels with Vikund, my paladin.

Alioto is named after the former mayor of San Francisco because… well… I needed a name and that popped into my head and, more importantly on a very old WoW server, was actually available.  He is one of a selection of druids in WoW that have exactly the same dual spec options and professions.  I always seem to go feral for solo, healing for random instances, herbalism for harvesting, and inscription for a trade.  I actually have more such druids than hunters. 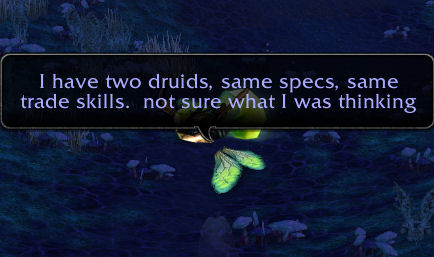 Just on one server

But now I had a chance to change this pattern.  I cleared out my healing spec on Alioto and picked up the new… well, new to me… Guardian druid spec, which is for durids wat is bare.  Or bear.  I pretty much had to do that because, if you look at our line up, there are not a lot of other realistic tanking options.  Though, as things will turn out, the cloth wearing priest healer will do in a pinch.

The plan was a warm-up exercise to see if we could actually work as a team with the somewhat changed classes of WoW.  Our target was to scout out the three final 5 player instances in Wrath of the Lich King.  Those were added after we had “finished” the last instance… Utgarde Pinnacle… in the expansion.

Time to finish off what we started.

More after the break due to an excess of verbiage and screen shots.