Five weeks of war have gone by and it has been a mixed bag of efforts, some successful, some considerably less so.

On the Imperium side of things, we were able to welcome French ConneXion (FXR) to the coalition.

They had been working with The Initiative up north before the war, so the invaders declared that they were part of the coalition and treated them as such.  Since they were already paying the price I gather they felt they might as well get the benefits of being part of the Imperium.

Meanwhile, Brisc Rubal seems to have become the meme of the week, having been named “Fountain Frank” in memory of Baghdad Bob from the Iraq War. 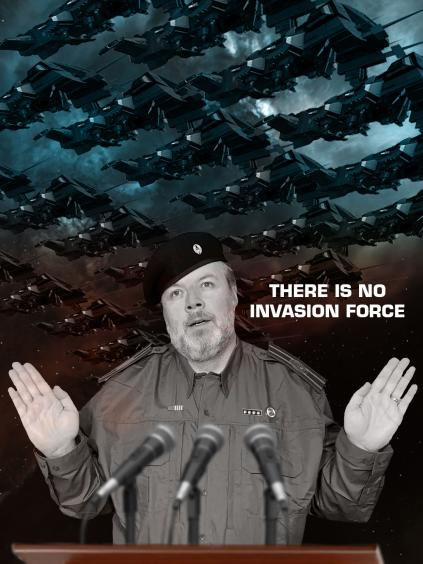 Brisc was nice enough to post a no background image of himself if you care to make your own version.

The Fountain Front is likely to become the Northern Delve front very soon.  Leaving aside some bypassed systems deeper in the region, the Imperium is down to the last six ihubs in the last constellation on the road to Delve. 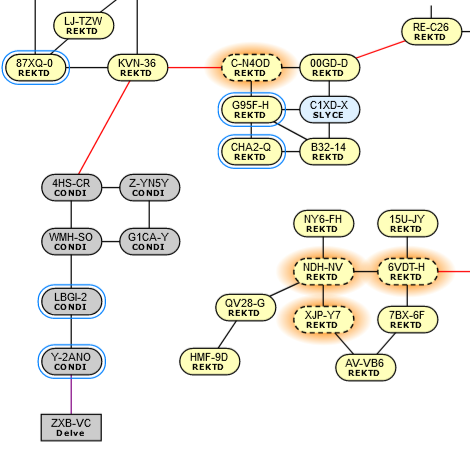 The Ansiblex jump gate network is pretty much a fond memory at this point and even the key system of KVN-36 has been taken by PandaFam.

Left behind are the Upwell structures, including several Keepstars, which the enemy has started to attack.  The J5A-IX Keepstar, on the boarder of Cloud Ring was the first to go.  The Keepstar was gunned and the battle report shows that it knocked down a lot of ship. 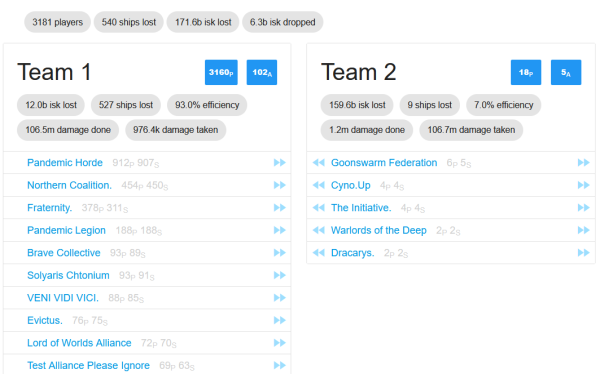 But with more than 3K players there to whore on the kill mail, there were no doubt lots of dumb targets willing to wander into the point defense system or sit still while the structure bombed them.  527 kills is a nice number, but the objective and the ISK war clearly goes to the attackers.

The Keepstar at IGE-RI saw us extract a price from the attackers during one of the timers, but the end was inevitable and it blew up yesterday.  I’ll have a bit more about that in another post.

TEST and their Legacy Coalition allies continue to diffuse their efforts and make little progress.  Or negative progress really.  Since their big attack hitting systems in eastern Querious, which took 27 ihubs in the first week and 14 in the second, things have fallen off for them.  The number of ihubs they held in the region was down to 25 as I wrote this. 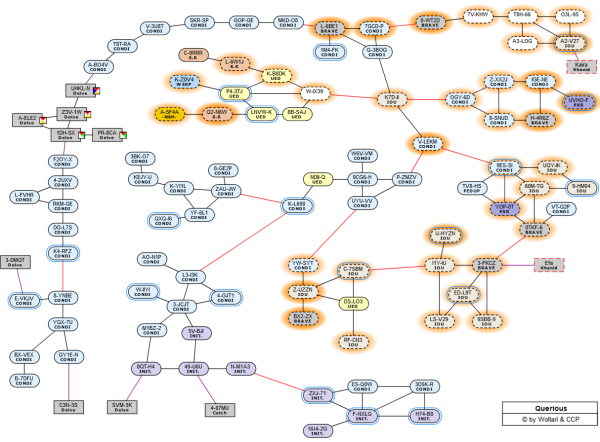 A couple of groups planted new ihubs where we blew theirs up, but most of them were just left empty.  The invaders can drop a new ihub there… and then we can blow it up again.  (Update: It looks like TEST actually got involved and dropped few ihubs in empty systems.  I am sure those will get special attention.)

Legacy started off trying to defend the ihubs, but seemed to have realized the whole “only owner can defend” thing, which I mentioned with with United Earth Directorate systems, was a problem that cut both ways.  Evictus (IOU ticker on the map) seemed keen to grab a lot of those ihubs but not so enthusiastic about defending them.

Meanwhile, they have failed to take any of the CONDI or INIT ihubs closer to Delve, leaving the Ansiblex jump gate connections intact for us.

Stalled in Querious, they continued to try and drop structures and POS towers around our space, most of which were blown up as they anchored.

They are also expending effort to shoot the Stain Russians because I guess Imperium Black Ops has been hiding in Stain and dropping on their stuff, including this juicy jump freighters.

Otherwise much of the week was spent with fleets sitting on either side of the 49-U6U-4-07MU or the TCAG-3-G-M4GK gate connections waiting for the other side to jump through.  This led to barbed exchanges over who ought to be jumping into whom, but in the stalemate scenario we win, which was summarized by FC John Hartley in this quote:

It was a busy week at the office, so I wasn’t able to sneak away for ops over lunch, but I still managed to get out on at least a fleet a day, plus some stuff on my own time.

My current toll of dead ships went up again.

I thought Keepstar kills would bring out more people to get on those kill mails.  It certainly seemed to be trending that way with more than 3,000 capsuleers on the kill mail for the J5A-IX Keepstar.

But yesterday’s Keepstar fight in IGE-RI, which happened in the middle of what is traditionally the high watermark for players logging in every week, Sunday at 19:00, saw a drop of about 500 participants on the kill mail.  The PCU for Sunday was 34,855, down a bit from the 35,479 we saw the week before.

There are three more Keepstars in Fountain that I know of (C-N4OD, KVN-36, and Y-2ANO), so there will be at least three more big form-ups for kills.  However, those Keepstars are getting closer and closer to Delve.  We shall see what happens.