Warlords of Draenor will be dropping in about two weeks, so it was clearly time for the long standing instance group to shake off the warm glow of summer and get back to work in Pandaria.  Last week it was just Skronk and I online on Saturday night.  We doubled that number this time around as Ula had resolved her authenticator issue and Earl felt a bit healthier, so the lineup for the night was:

While it wasn’t a full group, Earl and I had run to level 90 and subsequently equipped ourselves with gear from Timeless Isle, so we were much more powerful than we would have been if all of us had been level 89.  We certainly felt we had a shot at the last three normal mode, five person instances in Pandaria.  We would have a mighty tank at least, which would no doubt help Skronk come to grips with the healing changes that hit with the 6.0 release.  So this would work as a training exercise as well as a tour of the last few instances.

The first instance on our list was the Shado-Pan Monastery.

We had actually attempted this back in June with a four person group.  After we looked into the Mogu’shan Palace, Earl couldn’t make it, so the rest of us gave the instance a try.  The four of us managed to get to the third boss, the Sha of Hate, before we hit a wall.  I just never got around to finishing the post about that evening… or the Mogu’shan Palace run.  They are in my drafts folder still.

Anyway, we were set to pick up where we had left off.  With Earl tanking, we blew through the first two bosses without problem and caught up to the Sha of Hate. 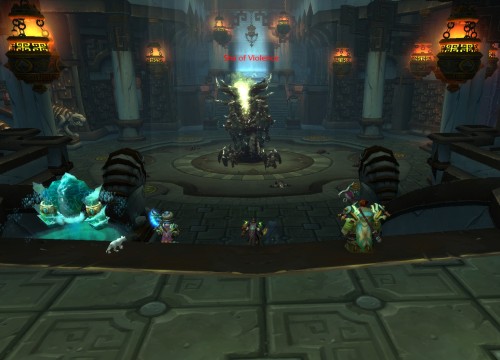 Down with the Shah… I mean Sha!

The Sha of Hate didn’t offer much resistance either.  With gear boosted DPS via the Timeless Isle gear, the Sha of Hate was down.  He barely had time to do any of his specials.  From there we fought our way to the final boss, Taran Zhu.

More after the cut, because I run on as usual.