The biggest mistake the devil ever made was agreeing to play God, one on one, on an eight player Total Annihilation map.

In the beginning there was Total Annihilation.

This was not the first RTS game I played, but it was the first of what I consider the three great games of the RTS genre.

The other two are StarCraft and Age of Empires II – The Age of Kings.

There have been other good… even very good… titles in the genre.  But for me, these are the crown jewels that defined the genre.

StarCraft showed that very different factions could be brought together to form an almost zen-like rock/paper/scissors balance that required serious unit management skills to excel at.

Age of Kings brought that sort of balance to medieval armies, advancing at a slower pace.  It reflected the real world aspect of cavalry vs. infantry vs. ranged, with siege engines in tow, forcing players to adopt a combined arms strategy to survive and win.

But before those two there was Total Annihilation, which brought chaos and mass slaughter.

TA wasn’t balance.  The ARM ruled the early game with the Flash tank and the Peewee rush.  Cavedog eventually had to give the CORE a unit whose only purpose was to kill Flash tanks and Peewee kbots.

It had a pretty bad, or at least not a very creative, single player campaign.  Resources were simplistic, just power and metal.  The UI was somewhat primitive compared to its contemporaries.

It was a resource hog that needed a couple of generations of CPU upgrades before it would run smoothly.  The music was literally in the standard CD format, you could pop the game disk into your boom box and listed to the sound track.

And yet it was wonderful, a synthesis of a number of ideas put together in just such a way as to make a great game.  Probably one of the greatest things the game did was make terrain matter in new and interesting way.  Maps were 3D and heights could give you range in shooting or something to hide behind when fire was incoming.  And then there was the whole modability aspect of the game.

Probably the greatest testament to TA is the fact that, while Cavedog Entertainment has been dead and gone for nearly a decade and a half, Total Annihilation still has a pretty strong and dedicated community still supporting it.  You can still buy a copy over at GoG.com, and it runs great on today’s machines. 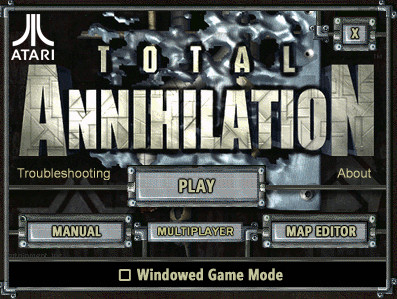 The Atari logo is a recent addition

Its main problem is that it was designed when multiplayer meant friends on a LAN, so being able to play over the internet requires effort.  You need some network know-how or something like Game Ranger to help you out.  So the idea of bringing the game into the 21st century is a compelling one.

More after the cut because of wordiness.

END_OF_DOCUMENT_TOKEN_TO_BE_REPLACED

With Planetside 2, the innovation is in how you buy it. For a massively multiplayer online game like this, you’d expect to pay a monthly fee like millions of people do to play World of Warcraft. Instead, Planetside 2 is free to play. Sony makes money when you purchase new weapons, add-ons for tanks, and other items, though you can also earn these upgrades by successfully completing objectives as you level up. Plenty of smaller games found on Facebook or on smartphones use this freemium model; now the model has entered the MMO world.

Popular Mechanics, The 10 Most Innovative Video Games of 2012

We do piss and moan about the poor state of the video game press.

Often it is our closeness to the subject and our own motivation and bias (journalists are not allowed to have that unless, of course, we agree with it, in which case it is just telling the gospel truth) that leads us to jump on comment threads (here is the cesspit that fertilizes the whole thing) or blogs (:blush:) to decry an article as totally biased or invalid because the writer in question was paid off, did not spend enough time with the game, included something that was clearly a matter of taste or option, or used “your” when they meant “you’re” in paragraph twenty-seven.

It is really our own little culture war, where if you do not agree with me about game X, then you must be the enemy.

Part of me is annoyed by this.  When I foolishly look at comment threads on gaming sites, I become depressed at the state of humanity.

And part of me sees video games as an entertainment medium and, thus, deserving of the same sort of coverage as any similar medium.  How does the journalistic integrity meter rate TMZ or Entertainment Tonight or any of that ilk?  Do we get out the torches and pitchforks when somebody gives a bad review to a movie we love? (If you don’t think we do, then you aren’t reading the right comment threads.)

But in the midst of that, nothing can rally gamers together like a non-gamer journalist covering games.

And so we have that quote at the top, retweeted by SOE in what I have to imagine was a moment of mixed emotion, where PlanetSide 2 is lauded as innovative because… if I read that right… they ripped off the business plan being used so successfully by Facebook and iPhone developers.  As they said, “…the model has entered the MMO world!”

PlanetSide 2 does merit some praise.  How about getting a shooter to work in a huge sprawling environment where thousands of players face off?  That seems to be a pretty decent accomplishment.

But to call it out because of its business model… which is pretty much the same as all of SOE’s other games at this point… plus all of the other free to play MMO titles out there… seems like calling out Heath Ledger‘s performance in The Dark Knight because of the cool clown makeup.

Not to mention that in the current online market, a subscription model MMO is about as common as a silent movie in the age of talkies.  But here is somebody for which MMOs are World of Warcraft.

And so we must put the hapless noob in the pillory for his transgression.  Point and laugh, people, point and laugh.

And rightly so, I would say.

But is this banding together against the ignorant outsider, the gamer Gaijin, a tribal thing?  Is so-called professional video game journalism the worst… except when compared with the alternatives?

Or is this just the hubris of journalists… or the hubris of people in general… that we feel we can rush into anything, clearly ill informed on the subject at hand, and add something of value?

Oh, and that Popular Mechanic’s article was probably right on target with Journey…. and perhaps the rest of its list.

I don’t know.  I didn’t actually play any of them besides PlanetSide 2.  I am only indignant about the part of which I have first hand knowledge.

Which sort of describes my relationship with the daily newspaper.  I believe whatever they write, except when it comes to articles about which I have first hand knowledge.  Those are always riddled with errors and are as often as no flat-out wrong.

There is probably a lesson in that.

The story of Darkfall is a saga unto itself.

The game was initially announced back in August of 2001, a time frame I put into perspective this way back in 2008:

…in August 2001 Dark Age of Camelot was readying for release.  I was still playing EverQuest, which was on its second expansion (count now: 14), on my 400 MHz Pentium II system with a hot TNT2 based video card, having finally ditched the 3Dfx Voodoo2 configuration. And Duke Nukem Forever was only approaching its fifth year of not being available yet.

The game stayed in development, only starting to show signs of launching back in 2008, by which point there were plenty of people who viewed the game as vaporware, never destined to see the light of day.

The development history of the game has its own long section in the Wikipedia article.

The game promised a long list of features, which I copied into a blog post as a reminder to check against what was actually available at launch.  Of course, I never actually did that, because I never actually played the game, but I am going to guess somebody did.

And the game did launch!

It went live in Europe in February of 2009 and in North America in July of 2009, which opened up a whole new can of blog posts.

There was the great EuroGamer 2/10 review scandal, which gave SynCaine meat for a week’s worth of posts, plus an ongoing metaphor for crappy reviews, though I thought that the whole thing was a false flag operation to build community.

Then there was conflict about the mechanics of actually playing the game, which did not adhere to some of the past principles of MMO convenience.  Some of the things complained about were listed as features by Aventurine.

And then there was yet another Tobold vs. SynCaine face off over what counts as content when SynCaine declared that Darkfall had added more content in its first year than WoW had added in its first five. (Though neither of them knew the true powerhouse of content.)

Then things settled down and most people went back to not giving a damn about Darkfall.  Even SynCaine stopped playing.  There was peace in the world.  Or at least we found other things about which to bicker.

And then Aventurine decided to disturb the peace by announcing… something.

Oh, Darkfall: Unholy Wars… which has a feature list that sounds like a subset of… Darkfall.  So clearly I am missing something here.

Is this a rewrite of the original?  It sounds like a new game on the web site, though the features sound like the original.  I suppose there are some nice screen shots, but what else it is?

This, of course, ignited… something.  Well, SynCaine seems dutifully, if somewhat laconically, pleased.

Meanwhile, Tobold wasted no time trying to spark up the passion that has been missing lately in his relationship with SynCaine by trolling him as quickly as his fingers could type.  SynCaine may be evil, but he is our evil I guess.  (Though the “needs the money desperately” line seems awkward from somebody who himself has a donation button on his blog.  By that logic I guess I should thus assume that Tobold cannot afford coffee.)

And while those two warm to this new stage of their relationship, other people… well one other person… seems to be saying what I was thinking, which is probably best summed up as, “Huh?”

What does it mean?