Our little expedition into EverQuest has advanced a little further.  We have faced a few barriers, such as when Grimfeather spawned right on top of us in North Karana.  That was a bit of a surprised. 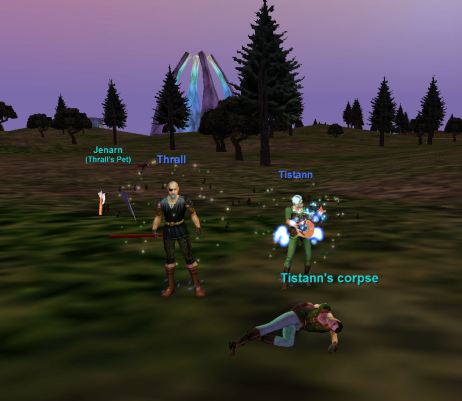 A song for departed... me

Actually, the biggest surprise was that two of us survived and made it to the zone.

And there was that stretch when North Karana seemed to be nothing but blue mobs and so the allure of that bridge to East Karana beckoned.

Is the linoleum greener on the other side?

That started out okay.  We did camp for a bit and were able to pick off some scraps that another group, which seemed determined to kill everything in the zone, missed. 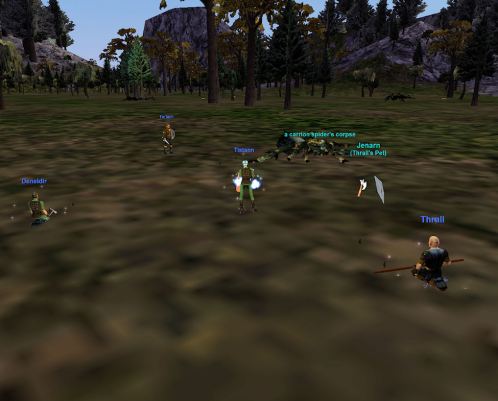 A few spiders were left for us

Then, when we were involved in a fight that was already stretching our abilities, a cyclops wandered up and we had to run for it.

That is Broon, Froon’s little brother or cousin or some such.  He is physically smaller than Froon, who I have mentioned before, being only level 23 to Froon’s 30, but that was enough to make him a hazard to us at level 10.

As you can see, my guys seem to have a head start on the fleeing process.  I think I may have understated the danger.  I typed in that we needed to move because a cyclops was headed our way, when I probably should have just written, “RUN!!!!”

They cyclops pounded Potshot’s guys into mush, while I had enough time to stop and take pictures.

Broon off to stomp somebody else

After Broon, we decided that maybe blues in North Karana were not such a bad deal.

And mobs come in waves.  We cleared out blues and soon more lucrative targets began to show up.  We hit level 11 across the board which, among other things started to open up griffawns to us as potential targets.

A Griffawn attempts to escape us

So all that was well and good.  And then I went back to Qeynos to buy spells.

I had not been thinking too much about money up to this point.  I had enough for my spells previously.

This time around though, I got to the spell vendor and noticed quite a discrepancy between the prices of the spells I wanted to buy and the amount of money I had.

Not much money... or equipment... on Thrall

Spells were 1-2 plat, and Thrall didn’t even have two plat coins to rub together.  And he had to pick up his level 10 and 11 spells.

Fortunately my bard, Tistann, had a bit more, maybe 5 plat total, so when he bought one new song, he handed the rest to Thrall who was able to at least buy a couple of key spells.

But in general, my simply selling to the vendor anything that drops off of mobs does not seem to be bringing in enough to pay the bills.  So I need a plan to bring in a bit more money.

I looked at trade skills for a bit, having seen some people hawking their wares on the auction channel in various zones.  But trade skills need some money invested in them before you can start turning a profit.  Not having the seed money, that does not seem to be the path for me.

I will have to look around and see if there are any mobs out that that we should be hunting that are more lucrative than beetles, lions, and wolves in North Karana.

At level 11, the game had one suggestion.

I wonder if gnolls are well off enough to support my magic habit.

Any other ideas for money out in the Qeynos region?

I have to save up at least enough for Bind Affinity at level 12 so we can travel across Norrath without having to worry about dying and ending up back in Qeynos.