I am not a big fan of the EVE Portal App, which was rolled out to us last August.

I’ve tried it a couple of times and… well… it is kind of shit.

Say rather that it does not fulfill any useful purpose for me in a world where the Neocom II app exists.  That gives me all the game info I need in a format I prefer.  This is largely because I want to run the app on my iPad (aging people like bigger screens), and the EVE Portal App is strictly designed for phone screens, so even when resized to the tablet screen it looks awkward and cramped and mis-aligned, while Neorcom II is designed for a tablet screen. (Though the EVE Portal App is a lot worse than other phone focused apps in that regard.) 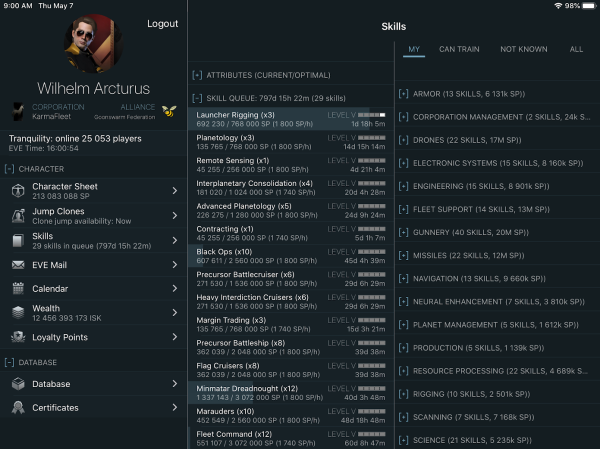 That is the exact same amount of screen real estate being used or mis-used.

The EVE Portal App does have the advantage of letting you change your skill queue, along with a few other things the Neocom II app cannot do, but nothing all that important to me.

All of which doesn’t mean much because, as a general rule, I try not to go out of my way to bang on things I don’t like if they are peripheral to my game play.  But today, today I feel the need to bring it up.  Why?  Because CCP just pushed out an update that introduces a PLEX trading feature to the app.

PLEX Trading on you Phone

As briefly described in their announcement:

A new feature has come to EVE Portal, the official EVE Online companion app. Exclusively for players in Omega Clone state, the Jita PLEX Market will enable you to trade PLEX anytime and anywhere, directly from your mobile device via the EVE Portal app.

The Jita PLEX Market gives you the ability to trade PLEX for ISK and vice versa. All transactions go through the Jita 4-4 market where players can browse and create PLEX sell & buy orders. In addition, you can browse and modify/cancel outstanding PLEX orders and browse your PLEX transaction history.

CCP mentioned something about this being a plan in the past, but if we started listing out things that CCP brought up as possibilities that never quite came to pass, we might be here for a while.  But now that it is here, the question that springs to mind is, “Why?”

I know why CCP would want this.  Anything that sells more PLEX is money in the bank for them.  But is there a group of players out there who are dying to buy and sell PLEX in game to such an extent that they need access to the market on their phone?

I am also curious about this going through the Jita 4-4 station exclusively, regardless of where your clone might me.  I guess it simplifies things somewhat, just pegging it to that location, and is something of an incentive to use the app if you don’t already have a Jita alt.  It also officially cements that station as the central trade hub of New Eden, as if there were any doubt.  But it does leave out the Perimeter Trade Towers one jump over where the prices are a bit lower.  That is where the serious PLEX traders go as the fees are lower.

You do get an advantage selling PLEX through the app, at least if you want to sell immediately to a buy order; you get a pass on the broker’s fee, which can run around 100K ISK alone per PLEX.  I guess that is something to tempt people who just buy PLEX to sell it for ISK right away, effectively a little extra ISK in your pocket with each sale.

But was it worth the effort?

Again, it isn’t going to impact me as I am not going to use it since the app looks horrible on the iPad.  I mean, seriously bad, worse than that first screen shot might lead you to believe. 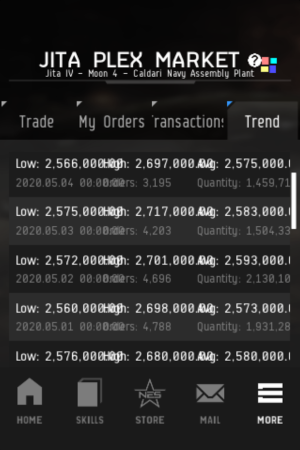 EVE Portal – not for tablets

But it might impact the EVE Online economy I suppose… if anybody uses it.

Addendum: CSM14 member Dunk Dinkle can’t figure out who this is really for either.

A little over three years ago the Nexon game KartRider was in open beta here in the United States.  My daughter and I tried it out and found it reasonably light and enjoyable.

Big Ad on the back of GFW Magazine

It wasn’t quite Mario Kart, but it was a decent game and seemed to have quite a following in Asia with a reported 230 million people having tried the game world wide. (Or is that just 230 million accounts created?)

However, within a few months, the beta closed down and nothing more was heard about a US version of the game.

Open Beta has Ended, See You Some Day...

Apparently it was not a big hit in the US.  It disappeared from the Nexon America site.  That was nearly three years back.

Now, however, Kotaku reports that the game will be coming to the US market after all.  But not on your computer.

Instead it will be available on your iPhone, iPad, iTouch, or Android device.

You will be able to play against three other people in local match ups, and it will hook up to Facebook and the Nexon item shop, where you will be able to buy new tracks and all the car upgrades and customizations.

The odd thing is that online play will not be available.  At least it is not mentioned at all currently.  I can see how you might sell things in the MMO version of the game, but on the mobile device version, where you can only play against three other people locally, or against the CPU, the item shop seems… less compelling.

Still, it is supposed to be a free download from the App Store, with the Apple device version available soon followed by Android support this summer.

Now it is things like this April Fools ad over at ThinkGeek that make me just cry.  It looks so good, but you click on “Buy It” and get the big “April Fools” page.

When the iPad was announced, we all crammed into a conference room to watch live and drool over every shiny corner and reflecty icon. After the glow of the initial announcement wore off, many of us came to the conclusion that the iPad was actually pretty useless. “It’s a giant iPhone!” some said. Others exclaimed, “WTF, no Flash!?”. Still, we knew that most Apple fanbots (us included) would have to have one anyway.

Knowing that many of our loyal geeky customers would eventually get their retractable claws on an iPad at some point, we knew we needed to take it to the next level. What cool things could we do with the iPad that you, our lovely geek customers, would squee over? A few brainstorming sessions later, the idea of a MAME cabinet came up and we knew we’d struck gold. How cool would it be to slide your iPad into a desktop-sized arcade cabinet and rock it old school with some Pac-Man or Space Invaders?

Why is this an April Fools joke?  Why isn’t this real?  Somebody get off the dime and get to work on this!

Okay, it seems a bit small.  I’d want something a bit bigger to play arcade games, but still.  This would tempt me to buy an iPad.

Curses to my friend Scott for sending me this link and simultaneously raising and crushing my hopes.