My daughter picked laser tag as her birthday activity this year, a step up from last year’s ice skating party in my opinion, because I got to participate.

So we headed down to our local Laser Quest with a pack of her friends and a few parents, where my wife had reserved a party plan which included two rounds of laser fun and a party room, checked in, got suited up, and went to war.

It was a free for all game, so there were no team and you could shoot anybody.  I did team up with some of the little girls from time to time because, in addition to our group there was a pack of teenage boys in the game.  The match ran for 20 minutes and, despite it being cold out and there being a “no running rule” to which I strictly adhered, I came out of there winded and sweating.

And much to my surprise, when they announced the results of the match, I had the top score.

Not bad for a guy close to 50 and at least 15 years older than the next oldest person in the match, one of the other dads in our group.  And he’s a fireman.  So I was pretty happy about that.  My wife said I was acting like a 9 year old at that point.

They even gave us a print out of our score. 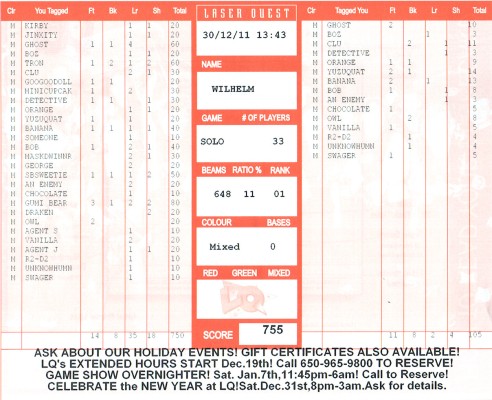 Of course, being a data nut, I thought the printout was pretty cool.  It shows you the list of people you hit (everybody picks a handle for each match), which of their sensors you hit (front, back, laser, or shoulder), and your point total (10 points per hit), in addition to your shooting percentage, who hit you and where, and your total score.

I was interested to see that the actual laser gun, which has multiple sensors on it, was the place I hit most.  It is clearly the biggest target.  So for the second round I told the kids to aim for the laser if possible.

We also agreed to team up, even though it was another free for all match. 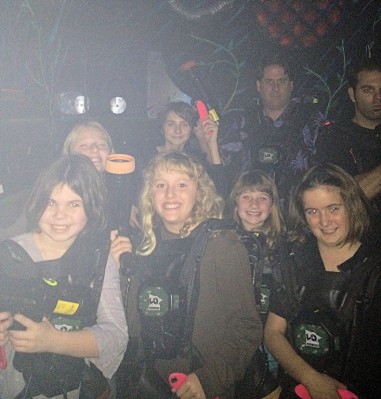 Some of the Team Getting Suited Up

An iPhone 4s in a dark room lit only with black lights… not going to get you your best picture ever. (Are there any good digital camera options for indoor flash photos?)  Still, that is most of us, with my daughter and I in the back.

So in the great big indoor room, we took over one of the up stairs positions and sniped a lot, which is what I did for the most part in the first round. (All that training in Desert Combat paid off, I became the annoying sniper guy who got the top score.)  We did end up assaulting one of the other upstairs locations to flush out a group of teenage boys who had hold up in there.  It was a bloodbath.

As a group we did much better during the second round and there were relatively few friendly fire hits.  I managed third place this time around, with fireman dad getting second, and one of the teenage boys (R2-D2) getting both first place for the match and the high score for the day at that location.

All in all, it was a blast.  The gaggle of 9-10 year old girls all seemed to have a lot of fun and there was talk of coming back from most of them.  My daughter wanted to forget the cake and presents and play another round right then.  I suspect we might see a couple more birthday parties at Laser Quest this coming year.