It is no secret that we are quite enamored with most of the LEGO games that Traveller’s Tales has put out.

We own almost the whole set, and have played them all.  Our current household ranking of the games, from most to least favorite, is:

So we had to get LEGO Star Wars II: The Clone Wars. 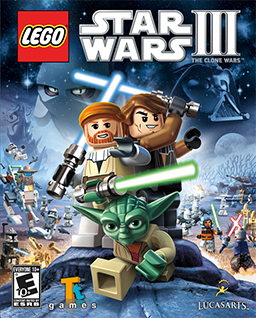 We received it in the mail about two weeks ago and it is currently vying for the second or third spot on our list above.

It follows the story, or at least the first two seasons, of the Star Wars: The Clone Wars animated series which we have been watching every Friday night at our house.  And while I have not been paying the closest attention to the series, I recognize situations that have come up over the course of the series.

The game introducing a new engine for the LEGO series which seems to help the Wii along as it tries to render things on screen.  The downside of the last few games, including Harry Potter, is that the Wii seemed to be quite taxed to keep up with what it was being asked to do.  That goes away, to a certain degree, with LEGO Star Wars III.

The flicker that bothered me seems to have been reduced.  Of course, those of you who grew up in the age of LCD monitors might not know to what I am referring, but flicker used to be a serious annoyance on CRT based monitors and tube TVs used as monitors.  The reduction in flicker might, of course, be attributed to the fact that we no longer have a tube TV, but a nice big LCD screen.

This bigger screen, since the game expands out to play on the full 16:9 screen, and the reduction in flicker makes split screen play more bearable.  I still am not fond of it, and neither is my daughter, and I wish it was an option that you could turn off, but it is not.  In fact, there are sections of play where two players work on separate parts of a level on a divided screen.

So my daughter and I make do by using the “drop out” option that lets one player leave the game so the other player can have the full screen to perform some task that really needs the whole screen to accomplish.  This is something of a weakness of the game, in my opinion.  Any number of times you have to take over some huge laser cannon and blow up an objective in the distance, only to have your screen cut diagonally across your view by you partner who is trying to knock off some droid troopers who have just shown up.

The game itself has all the things we have become used to in TT’s LEGO games, unlocks, hidden items, fun puzzles, and lots and lots of LEGO objects waiting to be smashed to pieces, an aspect of the game that is more satisfying in some visceral than it probably should be.  And it never gets old!  Never!

There are some new features.  You can now command a platoon sized group of clones, using them to target specific structures that need rapid fire to destroy.  There are a number of battlefield scenarios where you have to destroy separatist structures and capture their power sources to build Republic structure.  This includes a mini-map at the top of the screen which the Wii, its output limited to 480p, is unable to display clearly.  I would like to see the whole thing on 1080p output.

And then there is that clone troop with the Gatling blaster in the Ryloth missions.  I could just run around shooting that thing all day long.

Reviews of the game have come up in the “mediocre” range of 6.0-7.5 on a lot of sites.  The DS and 3DS versions, which lack a number of the new features, score at the low end, while the home console versions rank a little higher.  The main complaints, paraphrased by me, seem to be “not much new, and what is new gets over used.”

I cannot really argue with that.

We are only 30% into the game, but it still seems like a lot of fun us.  If you wanted more LEGO Star Wars, you’ll probably like it.  That is where we stand.  We wanted more and we got it.

And I am looking forward to the next installment from TT, LEGO Pirates of the Caribbean.

I might have to make another pass at my old post about Five LEGO Video Games I Want.  If they can do Pirates of the Caribbean, the door is open to other ideas.

[Keen and Graev have a nice review of LEGO Star Wars III posted.]