When it comes to watching gaming related videos on YouTube, I must admit that I do not have much patience.  Small screen video, bad audio commentary, and a general inability to grab and hold the interest of any viewer not captivated by shiny colors and an overbearing sound track pushes me to reject just about anything that demands more than 5 minutes of my time in the medium.

Some of that is my MTV generation attention span, but a larger part is resentment that some poorly produced nonsense is demanding my full attention as it spews out its low quality efforts onto my computer screen.  I can tolerate armature podcasts… well, some armature podcasts… because at least they only require me to listen.  But demanding eyes and ears and mind for crap, that is asking too much.

And then there is the Rooks and Kings channel on YouTube.

Rooks and Kings is a small PvP alliance in null sec that, through skill and innovative tactics, is able to take on much larger alliances and win fights.

And they can make decent videos.  Their latest effort is over an hour long and I sat and watched the whole thing.  It is a documentary describing how the alliance had to alter its tactics to deal with the ever larger fleets it had to contend with, how they came up with and evolved the tactic called pipe bombing, and then how effective it ended up becoming.

If you are interested in seeing a small group smash much larger fleets, describing how they did it, and playing audio of the victims (who in most cases express admiration at being so done in) this is a worthwhile watch.

Related to things discussed in this video are a couple of shorter videos, The Drebuchet,The False Tower, and War Crimes in Fountain.  The latter documents the time that Mister Vee got pipe bombed after mocking his fellow CFC FCs who had been roughly handled by Rooks and Kings.  I was in a fleet later that day and people were talking about that action.

The call went out from Mister Vee for a fleet.  This time it was one of our new fleet doctrines, Tech Fleet.  Tech Fleet is based around armor tanked Tempest Fleet Issue battleships and support ships.  I am still a week or so short of flying the Tempest, but I was ready with the logistics ship for the fleet, the Oneiros.  I had a shiny new one in my hanger waiting to go and the skills to fly it.

Again, The Retirement Club was the enemy, and the action was down in Gentleman’s Agreement space, at P3EN-E.  A chain of titans was laid on to deliver us from VFK to P3EN-E.  However, once we got there, things did not go quite to plan.  The enemy’s cyno ship was popped by Gents before the enemy was fully bridge in, which scattered them about the system.  Our attempts to chase them down and kill them was hampered by our own bubbles at a couple of points.  In the end there were some kills, we blew up a POS that had come out of reinforce, and that was about it.  We took very few hits and nobody was in any danger when they called for reps.

But at least I got a new ship out in a fleet finally.  It has been in the hanger for weeks.

And, of course, I took pictures along the way.

Tempests and Oneiros forming up

Somebody bumped the titan… again…

Closing on the second titan

Forming up on the third titan 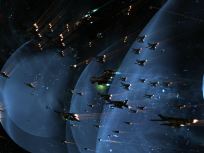 Bubbles up, repping somebody 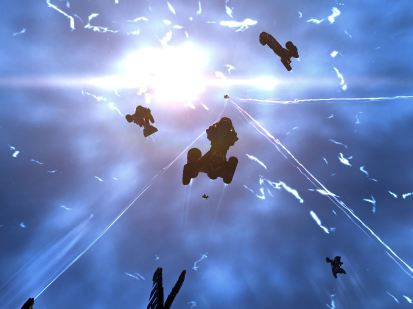 Orbiting the POS while those with guns blaze away