While my weekend… and, really, the last week… was spent mostly focused on World of Warcraft, I did find some time to drop into EVE Online.  I sort of had to, or end up stranded.

Shortly after the Phoebe expansion hit the game, as in the very next day, we deployed south again.  Our pre-Phoebe warm up deployments had been down in Insmother and Feythabolis.  We continued out our pattern of hitting the south by showing up in Omist.  Clearly we are out to annoy the N3 coalition and their vast tracts of renter space.

The deployment started with operations during European prime time and continued during the early US times, during all of which I was as work.  When I finally arrived home on the west coast another group was headed down, led by Baby Lemba, the FC of a thousand voices.  While I had initially planned to go south in an Ishtar again and actually shoot things, there was a call out for more space priests.  There is always a call for more.  So I swapped out the Ishtar for my Basilisk so I could keep the fleet in good repair.

The Basilisk, as a choice, seems odd to me, though I don’t pretend to understand the intricacies of these sorts of decisions.  Up until this point, the Scimitar had been the shield logistics ship of choice, being both fast and cap stable.  Having taken up the Basilisk, we gained a bit more shield repping power and a bit more effective hit points, but our logi are no longer cap stable.  Instead we have to cap chain.

Cap chaining is where CCP gave up on any last pretense of realism, kicked the laws of thermodynamics to the curb, and embraced a “sum greater than the total of the parts” solution because… they could, I guess.  The capacitor of the Basilisk, as fit for our doctrine, with modules running, runs dry in about 45 seconds, at which point all the modules shut down.  But if we mount remote capacitor transfer modules, lock up the next ship down the line and start sending them capacitor juice, the problem is solved.  The output of the cap transfer modules is greater than the amount needed to keep us cap stable and we can run all our modules all day so long as we stay within range of each other.

Which is fine.  Cap chaining isn’t tough, so there is a net benefit… until you’re the only logi in fleet, which happened to me a couple of times.  And then you are pretty much useless and wishing you had disobeyed orders and brought a scimitar.  But I am good and always bring the right ship with the doctrine fit, so when Lemba had us undock for the trip south I was in a Basilisk.

That Stratios though… that is not doctrine…

The wormholes were not being as kind as they sometimes are, and we actually had to travel for a bit to get to our end of the pipe down south, and at the far end we were a good 16 jumps away from the planned staging system.  The trip had its moments, as we caught a carrier along the way (though I didn’t have my combat drone loaded, so couldn’t whore on the kill mail), but a sense of urgency was on us as well.  Lemba changed our destination along the way as there was a fight already in progress.

Somehow, over in XGH-SH, we had gotten in and were with in a hair’s breadth of taking the station and perhaps even flipping the system.  We were unlikely to hold it, but it would be an annoyance if we made N3 retake it.  We dropped our larger ships, especially the industrials, from the fleet and started slow boating through gates in hopes of being able to make this happen.

However, by the time we had gotten there the hostiles had also thrown in reinforcements, including carriers.  We were told to safe up, use our mobile depots to mount our cloaks if they were not already on, and cloak up.  I made a couple of safe spots, got myself cloaked, and then waited.  After some time Asher told us that nothing more was likely to happen, the system was too hot for us at that point, so we should safe log off if we could.  Extraction ops would come later when things quieted down.

I remained stranded there for a couple days.  I missed the extraction operations, so started slowly working myself back to our staging system.  There were a couple of times when I was in fleet and trying to make my way to them, only to be waved off by the FC as there were camps between us.  So I lingered alone in hostile space, where at least I could provide some intel and be an annoyance.  I got locked up on one gate by Sholto Douglas of the Methodical Alliance, but he either didn’t have a point or his heart wasn’t in it, as I managed to warp off and safe up.  I chatted with him a bit in local, because this is EVE and line members of the various groups rarely seem to harbor the hostility that the leadership sometimes attempts to instill.

Eventually though, I decided to make a run for it.  I got online and into fleet to hear that they had a Nyx super carrier tackled just a few jumps from where I was safed up.  I had my combat drone in my bay, so I decided to get in on that kill mail.  I crashed gates, including one that was camped, until I joined the fleet.  The Nyx was deep into structure when I launched my drone.  My drone got there and managed to get at least a shot off, so when it blew I was on the kill mail.  I was the lowest damage contributor of those who did any damage at all, but I made it. 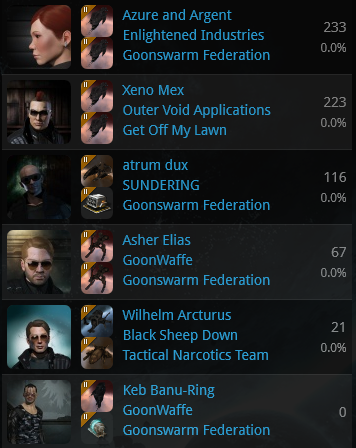 A super capital kill is always good.  I posted a few pictures of the wreck shortly after that fight.

After that though, it was back to shooting structures.  I do not mind those ops, even if being logistics on a structure shoot is the only thing more boring than being DPS on a structure shoot, if only because you have to pay attention just in case somebody starts taking damage.  And when you are the only logistics ship with a fit that requires a cap chain you can barely help with that.  I could save somebody for long enough for them to warp off, but then I would be running low on cap.  You need at least two in order to have a cap chain.

We did see the occasional amusing bits or pieces of space history, like an Atlas Alliance infrastructure hub.  Atlas Alliance closed down back in 2010. 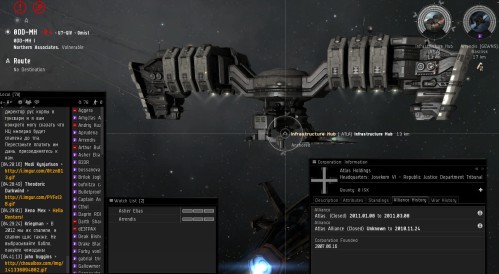 But after a number of those ops, the allure of World of Warcraft and getting in some last minute achievements and prep for the expansion took over.  So I dropped out of space for a while.  I still watched the broadcasts and, judging from them I missed a couple of fights.  I also missed getting piped bombed at one point as well, which meant moving people back down to Omist again.  Being on the third such deployment in approximately a month, I was getting a bit tired.  The pace of activity is constant but can be wearing.  So I rested, parked down in Omist, waiting for the recall to sound.

The recall came in the form of a broadcast this past weekend which announced, in case we hadn’t heard, that we were headed home.  I hadn’t heard and was keen to get on the train back to Deklein.

Getting home turned out to be fairly easy.  What I guess I would call a “do it yourself” fleet was up, with instructions in the MOTD about how to proceed.  A wormhole had been found just a few jumps from our staging system in Omist. 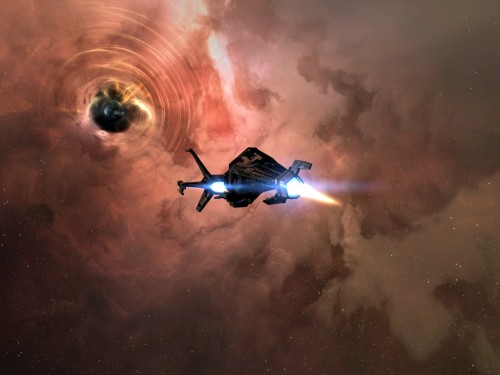 Landing on the wormhole

From there it was in and out of a wormhole that deposited me in Pure Blind and on our jump bridge network, where I accrued my first bit of jump fatigue.   Boy, that is annoying.  I only had to take two jump bridges to get home, but there short wait while my jump timer counted down before I could take the second.  A comprehensive, pre-Phoebe jump bridge highway now seems like a complete waste of resources.  Better to place them strategically to lop off jumps from routes that would otherwise require many gate jumps.  But I don’t run GSOL, so I just take them were I find them.

But I was back home in Deklein.  And the first thing I did was clone jump to my implant clone in high sec to speed up my training queue a bit.  Since I was going to be focused on WoW for a while, it was probably the best place to be.  Meanwhile, we will hopefully have a bit of a break before the next deployment.  I think three such high tempo deployments, one after another, started to wear people down a bit.  Clearly the numbers responding to pings was declining a bit before I got involved else where.

As for how things went, I am not sure.  There were clearly some high points, and the hostiles had to pull forces into the area to counter our activities and clean up after us.  But I haven’t seen any numbers on how much actual damage we did.  If nothing else, we livened up what was a relatively quiet area of space.

A Nyx supercarrier cried out and died. 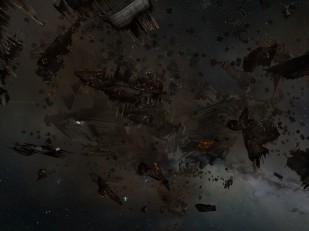