So when our FC had us all enter a starbase password and then warped us into the Brave Newbies‘ POS in V-3YG7, I was pretty sure that this was a product of our superior intelligence network.  Then, as we hung out in there, I zoomed the camera out to get a screen shot of us in the POS. 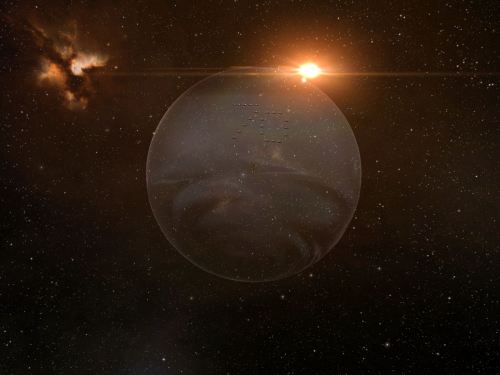 As I did that, I noticed how some of the modules were arranged.  A crop of the above shot:

Hrmm… that happened to be the same pair of characters we entered in the starbase password field.  Maybe it wasn’t an intelligence coup after all.  Seems like they left the key out so anybody could stop on by… if they but had the wit to see the message written in the night sky.  Funny stuff.

The op itself was a bit of a mess.  I gather that it was one of those “fight dates,” but we went out there in Harpies and wanted to fight that way, while they just wanted to bomb us or mess around on the station undock.  We nibbled at them, the nibbled at us, some kills were scored, though it was difficult to get any of the few targets of opportunity locked in time to get a shot off before they were gone.

The station camp and mucking around in their POS was only amusing for so long, after which we turned for home.

And that was uneventful until we landed on the jump bridge in 8QT-H4 and got bubbled and pipe bombed by some Pasta Syndicate battleships.

The part of the fleet that bore the full brunt of the smart bombs blew up right away.  Those further afield survived and managed to get in a position to fight back.  I was closer to the “dead” end of the spectrum.  I happened to have my hardeners on out of habit, so lived while some of those near me blew up.  But I was down to 20% structure with a big flame coming out of the back of the ship.

I started flying towards the edge of the bubbles to get away, taking a few shots at the ravens as they warped off.  One went down and I was on that kill mail.  And then somebody said that their FC, Fragbox, was still in the middle of the bubble in a Tempest.  I turned around and went after him for no good reason other than it seemed like the right thing to do at the time.  He set off a smart bomb that destroyed what little there was left of my ship, but he want down at almost the same moment.

He got the final blow on both me and my pod, but I got on one more kill mail as my corpse floated in space.  My first death in the Delve campaign so far.

Fortunately, some Harpies were up on contract when I got back to the station, and some Ruptures are promised in soon.  So I should be re-armed and ready to go for the next fleet.

At least I remembered to insure my ship right before this op.

Link to the new battle summary tool, now with the correct link, which shows just how trashed we got.

In the mean time, some screen shots from this evening’s adventures. 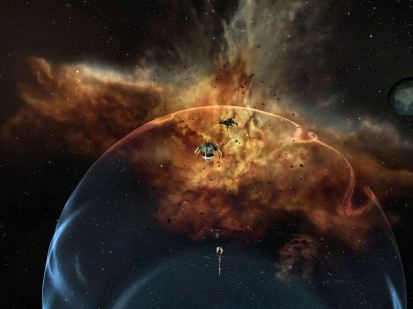 Hanging on the station in V-3YG7

Zooming about in the POS

Get out of the way, burning Harpy 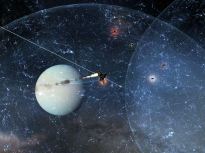 Turning about for my death run 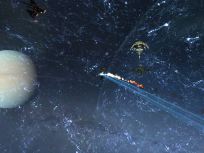 Heading back in on Fragbox

Wilhelm’s corpse amidst the wreckage of his ship