The installer is sitting there on my hard drive, waiting for the 15th.

I was ready for the game last weekend.  I was feeling a bit of MMO ennui and could have used something new to dive into.  I could probably go for it this weekend as well.

But we all have to wait until Tuesday.

The installer has been on my hard drive since mid-March, just waiting for its time to come.  Waiting because, well… it doesn’t do anything yet when you try and install.

It does update its install packages when you launch it.  I have done that a few times to ensure that I am up to date and do not have to patch quite so much next week.  I am not sure that updating the installer is covered in the Blizzard launch day guide, but I would recommend it.

Otherwise, the installer doesn’t do the one thing we all want… actually install the game.

This, naturally has some of those at the forefront of the digital distribution age a bit annoyed.

Penny Arcade has a comic up bemoaning the need for those who with the installer already in our possession having to wait for physical boxes to catch up via the old school brick and mortar distribution system.  The comic wraps up with an analogy (what, is May national bad analogy month?) that compares the digital vs. physical distribution conflict to making automobiles drive slower so as not to hurt the feelings of horses.

Today, in 2012, creating any general traffic laws to protect travel by horse would be crazy.  Unless you live in a rural area or are a member of one of a couple of religious sects, you probably don’t even see a horse on the road on a regular basis, much less use one for transportation.

The problem with the analogy… which actually isn’t that bad of an analogy, it is just being mis-used… is that the ratio of sales for, and importance of, traditional physical retailers today isn’t anything like the complete lack of significance that horse travel represents today.

Rather, physical and digital sales today are more like the horse and the auto relationship of 100 years ago.  At that time, automobiles, like digital sales today, were coming into their own and represented a significant part of the market.  But the horse was still there and still represented the reality of travel to a lot of people much as the physical box of software does today.

And there were plenty of laws at the time restricting automobile use in ways to ensure that those whom still depended on the horse were not adversely impacted.  Speed limits in cities, for one example, which were enacted not to spare the feelings of the horse, but to ensure safe travel in an environment where automobiles and horses were in close contact.

Likewise, today, a software company cannot screw over the brick and mortar retailers… or even the online retailers that will ship MANY physical boxes… because they still represent a significant part of the sales channel.   EA says they love their retail channel.  Blizzard, I am sure, is offering up plenty of advertising co-op dollars to help physical retailers promote the Diablo III launch and offering incentives to have midnight launch events.

Fairness has nothing to do with it.  Maintaining a good relationship with the people who sell a a lot of your product does.

And lets face it, if you go down to Fry’s, you will see games from Valve, the biggest player in the digital distribution market, on the shelf.  Valve fully believes that the future is in digital.  But even they, with so much invested in digital, know that the physical box is not dead yet.

And so those of us who ordered digital versions have an installer that just says this when you launch it. 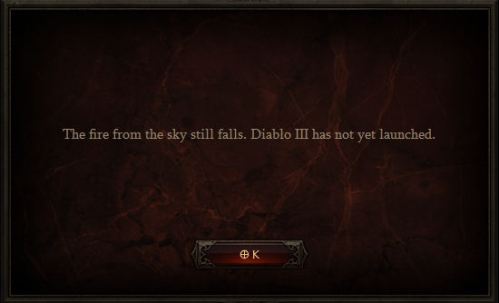 No install for you… yet

The future is not here yet when it comes to digital sales.  For big titles that are releasing across multiple sales channels, things still have to stay synchronized.  And so we must wait, sitting in the metaphorical back seat, repeating that oft heard chant.

Are we there yet?

Shit yeah I want to join via holoprojector!

Gabe gets to talk about Star Wars: The Old Republic today.  An interesting read.

Plus Tycho’s post above it convinced me I can stop considering Dungeon Siege III.

There are always multiple ways of looking at a problem.  The entertainment software industry sees the used game market, embodied by GameStop, as a bad thing.  As THQ’s Cory Ledesma put it in an interview over at CVG:

And Penny Arcade got in on the act and made the “used games = piracy” association.

I wrote 1,500 words on the subject, but tossed them because in my mind it all comes down to a simple choice.

You can say “screw you” to those who purchase the used version of your game, as THQ did in that interview:

Or you can figure out how you can turn them into a customer.  Here is somebody who has an interest in your game.  Getting that far is most of the battle.

Couldn’t you just tell them that if they want to access the online content they need to enter the code that came with the box, but if that code has been used or missing, they will have to purchase a new code for, say, $10.

$10 seems like enough to keep from rewarding the market from buying used.

Sure, you’d want to tinker a bit with what people got.  Maybe the original code gave you a little something extra, some sign that you didn’t buy used.  But you would want the second-hand purchaser to have access to all the functionality.

But if you work that out, it makes that person your customer in fact.  You made a sale that had very little overhead, the customer having provided his own box, disk, and manual.  It gives your marketing department another name and email address.  And I am going to guess that a certain percentage of such buyers will feel invested enough to buy your next game new.

It isn’t that I think THQ’s point of view is not legitimate.  They do have a point.

But is their response necessarily the best one?