That was how the fight was billed from the CFC side of things.

We were going to kill a super capital, rumored to be an Erebus, in its CSAA (capital ship assembly array) before it was born.  That this particular CSAA belonged to Intrepid Crossing (IRC), with whom we are neither at war nor at peace I gather, seemed irrelevant.  It was within our range and we were going to try and blow it up.  We have been down this path before. 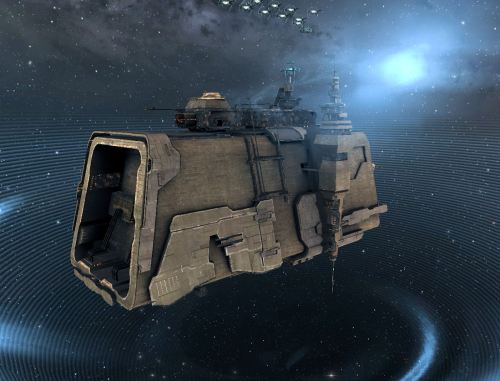 A CSAA in its natural habitat

Razor put the POS into reinforce and we were coming back to take it out and the CSAA with it.

This fight was pretty well advertised.    The CFC had been put on alert and told to expect a fight, while intel reported that IRC had issued their highest level call to arms and was going to bring in as many allies as they could muster.

The only people who didn’t seem to get notified was CCP, since they clearly did not reinforce the node where we were fighting.  Or maybe they did.  It is hard to tell, but things got bad.

So it was last night.  The call went out that the fleets were forming.  DBRB was leading the Alpha Fleet, which filled up very quickly.  Zagdul was leading an armor tanked fleet, so we had Abaddons flying with us.  And finally there was Lazarus Telraven leading the third fleet, the Drake Fleet.

For reasons unknown, the Drake Fleet ended up in operations channel 2 because Zagdul took channel 3.  This seemed to confuse Laz and he kept telling people we were in channel 3 for long past the time it should have taken him to get his brain around it.  For Logical Laz, the third fleet should be in channel 3 dammit!

I joined Laz in a Drake, determined to shoot something fun before the month ended.