I thought EVE Online going to updates every five weeks was a bit of a fast pace, but now we’re into our third update for November.  We had the new player login campaign update first, a tiny update yes, but it got its own release notes, so I covered it.  Then we got the Beat Around the Boosh update two weeks back.  And now we’re getting an update to the Triglavian event and the Team Talos Rapid Fire update, which was mentioned back at EVE Vegas.

Also coming with this update is the Triglavian dreadnought, the Zirnitra, which was previewed at EVE Vegas. 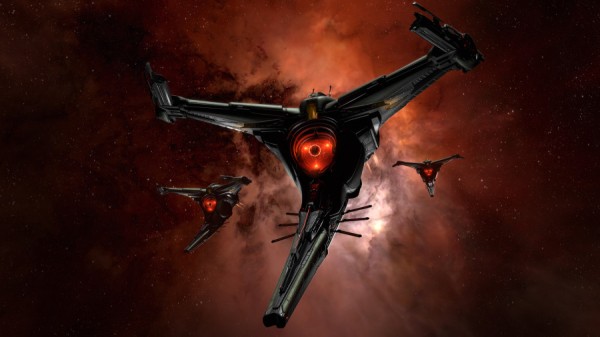 With it comes a new capital ship class entropic disintigrator weapon along with the X-large ammo to go with it and the skills you’ll need to train up in order to use the ship and its weapons.  And, of course, there are BPCs out there.  This dreadnought is supposed to be less expensive to build than past faction dreads have been.  CCP wants people flying this beast.

Then there is the Team Talos project, the Rapid Fire update, which brings good news to a number of Minmatar hulls and auto cannons.

On the flip side, the over-used Muninn is getting a bit of a nerf (no wonder Elo Knight is taking a break now) as are Angel Cartel ships.

Then there is Team Five-0 and the shareable bookmarks update.  This brings the long sought after Alliance Bookmarks feature by creating a way that bookmarks can be shared via the Access Control List interface.  There is a cost however, in that there are limits to the number of bookmarks than can be saved.  There are 102 individuals that currently exceed the 20,000 bookmark hard cap that the system will enforce, but with 248 million saved locations in New Eden, some effort to keep system performance viable had to be made.

There is a dev blog that covers this in detail and the forum thread where problems with the change are brought up.  No matter what CCP does at this point, somebody will be unhappy.  Of course, I only have a few hundred bookmarks, so I am nowhere close to the problem zone.  And I know people who are very happy with the change as well.  I’ll personally be glad to have wormhole bookmarks that can be set to expire and go away on their own.

Then there is the Black Friday login campaign which will reward capsuleers who login daily between Nov 27th (tomorrow) and Dec 3rd.

Further details for these changes are in the updated November patch notes, with some additional information on the updates page. The update has been reported live, so it is our reality now.

In addition, as part of EVE London CCP released a new trailer for items coming to the game this winter.

However, a good portion of them are available as part of today’s update, which is dropping nearly a month ahead of the calendar maker determined first day of winter in the northern hemisphere.  But I’ve always maintained that seasons are more a state of mind… though November still feels like autumn in my book.

Addendum: Probes are now optional in Thera thanks to the bookmarks change.