Citadels are all over New Eden at this point, with the medium sized model, the Astrahus becoming a common site just about any place I fly.

Saturday gave us the opportunity to clean up a few of these citadels.

A fleet went up on Asher Saturday evening (at which point it was already Sunday in New Eden) with the objective to go shoot some things, which is usually a euphemism shooting structures.  It was an Augor Navy Issue fleet, which meant lasers, which are good for structure shoots as you generally don’t have to reload a laser unless a frequency crystal burns out over time.

I was actually in the middle of something and didn’t see the fleet was up until almost 45 minutes after it had been announced, generally a sign that it might be too late to catch up.  But it was Saturday evening, structures take a while to shoot, and we haven’t been going too far afield for these sorts of things, so I decided to log in all the same to see if I could join in.

Logged in and on coms, I was able to spot where they were using the map option that shows where fleet members are located and the destination was linked in fleet after I had set out, so I was able to take gates and link up with the fleet shortly after they had arrived at what sounded like was their second target for the night, an NCDot Astrahus that was coming online. 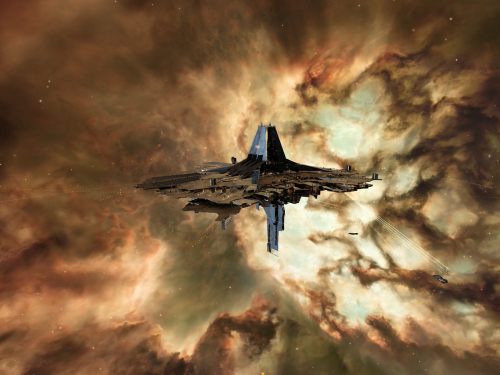 An Astrahus in Aridia

When a citadel finishes its deployment cycle, it then has to go online, a process which isn’t too long, but which can be interrupted by shooting at it.  This is the best time to kill a citadel, as it cannot defend itself during that time and you can kill it right then and there without any additional timers.

I appreciate that CCP decided not to carry on with the whole entosis link module thing when it came to citadels.  Everybody shooting something is at least a bit more interesting (and much prettier when you’re using lasers) than a fleet sitting around watching one person use their Fozzie laser on a structure or command node.  But to keep citadels from just being blapped quickly out of existence by a supercap fleet when coming online, there is a cap on the amount of damage that can be applied.

For an Astrahus, if you are applying damage at the cap, it takes 22 minutes to kill one when it is vulnerable.  So we were out there with our Fountain allies, LowSechnaya Sholupen, blazing away at the citadel named, if I recall right, Steak and Onions. 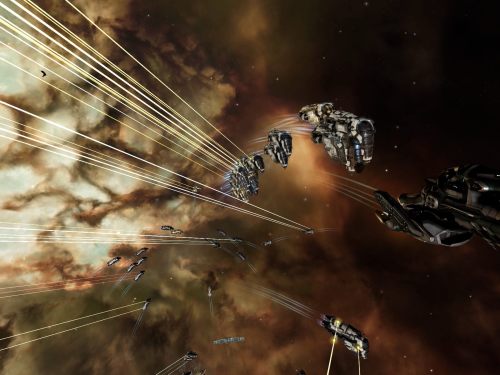 This was the second NCdot Astrahus on the list of targets for the night, another having been popped earlier in the evening.  NCDot apparently wanted to seed the route down to Delve with citadels to cover any potential move op, but didn’t use a neutral alt corp and subsequently didn’t show up to defend the citadels as they went online.

And so I got to see my first Astrahus explosion. (kill mail)

I will put the explosion sequence I caught in the gallery at the end of the post.

After that, our we diverted off to help LowSechnaya Sholupen with a tower belonging to The-Culture (formerly that part of Black Legion that wanted to live in null sec) that was coming out of reinforcement.  They even provided a titan to bridge us over to the fight. 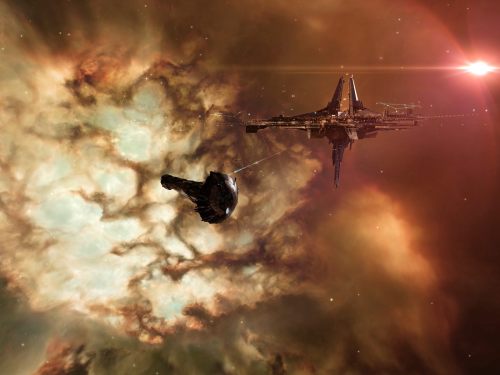 An Avatar tethered on a different Astrahus

Given how careful we tend to be with our titans, it was kind of fun just to see one hanging out on a citadel waiting to bridge us.  We were bridged out but arrived a little too late to get a kill on the tower.  The shields were already up past 50%, so they could add more stront.  Along the way there Asher was looking for somebody with a cyno… and eventually somebody had to go buy one… during which time it came out that, while nobody had one, several of us came armed with festival launchers.  SynCaine was in fleet and called me out for being on that list, so I targeted him and sent some copper fireworks his way.

The cyno was so we could bring in a few LowSechnaya Sholupen to join us in the fight that eventually developed around the tower, where we traded a few ANIs for a Minokawa fax machine and some Rattlesnakes, which won us the ISK war for sure.  On the down side, mine was one of the ANIs that went down.  Hopefully somebody looted that festival launcher.  Good thing I brought down an extra.

If you look at that kill mail, I clearly forgot to clear my cargo hold after moving the ship down to Delve.  Ah well.  I was at least reminded to empty out the cargo holds of a few other ships.

I was able to watch the battle from my pod as the hostiles couldn’t spare any attention to blow me up.  That put me on a couple more kill mails as a pod, including the one for the Malediction that had tackled me.  When the fight was over I had to warp over to the POS to get somebody to blow me up and send me home.

That was it for the moment.  The fleet headed back home and there were some administrative things to look into.  But a while later a Confessor fleet went up in order to bust the third Astrahus of the night, and the second for me.  Keeping to what seemed to be a food theme, this one was called Meatball Sub. 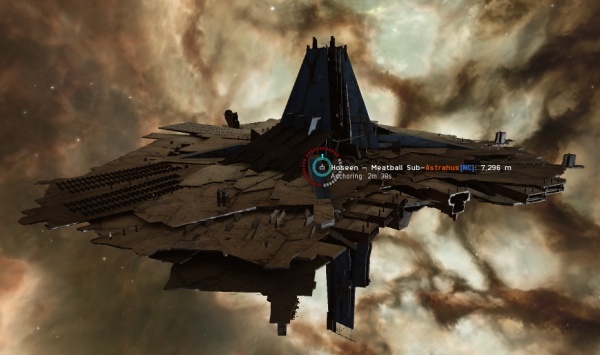 This citadel shoot also went uncontested.  We got ourselves anchored up and, once the timer finished its count down, opened fire on it.

Confessors firing on the Astrahus

LowSechnaya Sholupen and a couple of their allies joined in for this kill as well.  Even with a smaller fleet… no dreadnoughts helping out this time around… we seemed to be able to hit the damage cap fairly easily.  You can tell when you’re there as you will start registering zero damage hits every so often as the damage output exceeds the cap.

I tried to get a different camera angle on the second Astrahus when it exploded, but the underside view wasn’t dramatically different.  And it all leaves the same wreckage in the end. 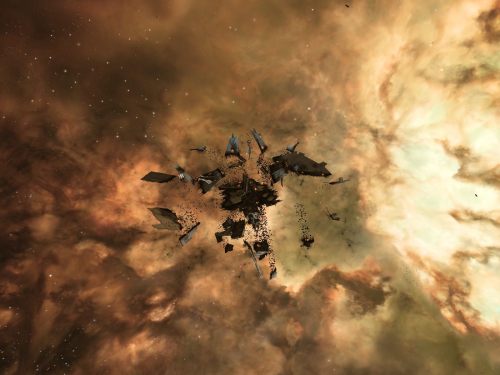 Once done it was back home to Delve.  Not exactly a huge set of blows against NCDot.  Astrahuses are pretty expendable.  But it was nice to finally get to see a couple of them explode.  If you’re going to shoot structures, you ought to get a pretty payoff when they blow.  More explosion pictures in the gallery from the op below. 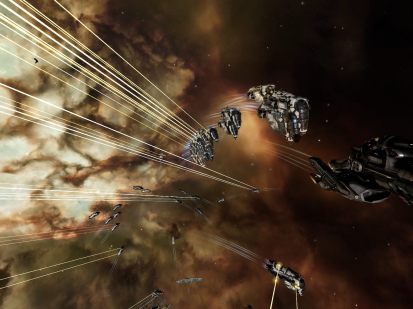 An Astrahus in Aridia

And it goes boom 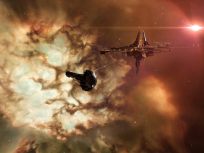 An Avatar tethered on an Astrahus 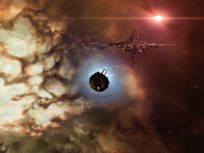 Bridge up from the Avatar

LSH dreads and the dead Minokawa

My pod roaming around the fight

Confessors firing on the Astrahus

The second Astrahus starts to light up