No.  No more kids games.  Kids don’t spend well and it’s very difficult to run a kids game.  Turns out Kids do mean stuff to each other a lot.

Back towards the end of January, SOE announced that it would be closing down four of its titles this year.  The closures were set out with the following dates:

While some at SOE have, in the past, expressed a desire that MMOs should never die, the financials and resource constraints companies face do not always support those ideals.  Smed said, it wasn’t a cost issue… and then turned around and said that it was, in fact, a cost issue:

This isn’t a big cost issue. The real problem is maintaining the code bases when we update our authentication or security updates. It’s really that simple. The costs scale with the userbases. It’s just getting prohibitively expensive in terms of time to maintain these games.

So today we say farewell to the first two titles on the list, the two titles in the SOE lineup aimed at kids.  As you can see from the quote at the top of the post, it seems unlikely that SOE will try that focus again.  So goes the myth of the kid with daddy’s credit card that was so popular some time back.  It turns out that they don’t spend money.

Oh, and they are mean to each other.  I guess that fits the stereotype that WoW problem players are all 13 year olds, though I would not discount the 18-24 year old demographic when it comes to excelling at obnoxious behavior.

It was tied in with a TV series that has since ended… sort of… Netflix might revive it.   But as a game, it struck me as little more than a shared lobby for mini-games in the hour or so I spent on it on quiet Sunday afternoon.  A vehicle for selling Jedi hats.  I am sure some will miss it, but it never seemed to me to be a high point in the history of SOE.

More like a bone thrown them by Lucas because they were yanking the Star Wars Galaxies license just before Star Wars: The Old Republic went live.  I hope SOE made some money from it to fund other things, though I doubt they would be closing it if it was bringing in a lot of money.

Still, SOE gave people their fill of Jedi hats during the last days of the title.

As previously announced, we wanted to remind you that game services for Clone Wars Adventures will be discontinued the evening of March 31, 2014. We have had many incredible experiences with you in the game – from insane battles to unbelievable memories – and we thank you for all of the great adventures and support over the years.

On Tuesday, March 18th, most items in the Clone Wars Adventures Marketplace will be reduced to 1 SC each for you to enjoy over the last couple of weeks. For more details, information and FAQ, please visit SOE Customer Service.

May the Force always be with you!

Out in style I suppose.

A lot of people were excited about Free Realms.  Even the “What is Free Realms?” marketing blurb sounds exciting.

What is Free Realms?

Free Realms is a free 3D virtual world where you can do whatever you want, whenever you want! Jump in straight from your web browser! Once you create your character, you’ll be in and playing in just a few minutes.

Decorate your house, then invite your friends over for a party! Teach your pet a new trick or dress them up in a sweet costume! Battle enemies as you search for lost treasure or duel other players, mine for gold, cook up a meal, or race your car! When you’re ready for a different kind of challenge, play a wide variety of fun minigames, jump into the trading card game or check up with your friends on your profile page. Free Realms is the place to join up with your friends to discover, explore, compete, chat, share achievements and just have fun! In Free Realms, YOU RULE.

YOU RULE, until the bank forecloses.

The game ran into its own “gotta pay the bills” problems not to far into its life, and the velvet ropes vision that Smed put out there had to grow more restrictive in order to shake some coins out of the players.  I am sure that SOE’s problems with Station Cash and “triple Station Cash” offers did not help.  And when they were offering lifetime subscriptions for just $30, I suppose that was a sign that the cow wasn’t giving enough milk. 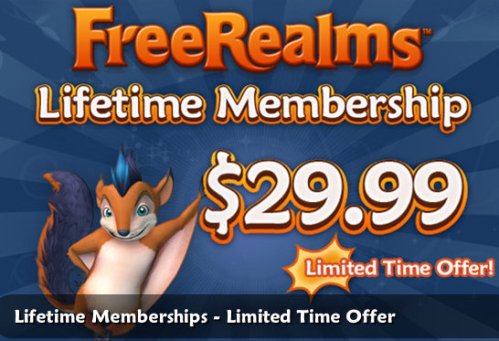 Still not sure if that is a squirrel

Still, Free Realms was interesting. (I think Tipa kept track of it best.)  It came out on multiple platforms, starting on Windows and then moving to Mac OS and then eventually to the PlayStation 3.  Amusingly, while PlayStation support was announced early on, the Mac OS version came out first.  My daughter played it on the Mac, though support for the game was a bit spotty.  After the third time SOE support responded to a problem with “delete everything and install from scratch” we decided that maybe it was time to move on.

We also tried it on the PlayStation, but since you cannot share accounts, that meant that anything my daughter had was gone.  So that did not gain much traction.

It also seemed a much deeper title than its Star Wars stable mate, which probably made it just that much more expensive to maintain.  And then there is the engine problem.  SOE seemed to be all over the map developing games on different engines, which leads to support and maintenance issues over time.  We have seen with the whole Landmark and EverQuest Next thing that SOE is moving towards consolidation.

There were no cost reduced hats to celebrate the end of days in Free Realms.  The last producer’s note was from back at the closure announcement.

Usually I’m in here telling you about cool new developments in the Realms. Today is a much different day for me. I’m deeply saddened to announce that we will sunset Free Realms on March 31, 2014.

Free Realms has truly been a labor of love for SOE (even our own president’s kids are huge fans and active players of the game!). In a nutshell, the game has reached a stage in its life cycle where players are growing up and moving on to other games.

When we first released the game in 2009, it was one of the very first free-to-play MMO for kids and teens, and we couldn’t be prouder of everything we have accomplished together in the game. While today’s news might be a disappointment, we’re sincerely excited about what’s to come for the game before we say goodbye, including player celebration in-game events and more!

We will share details on the upcoming activities and sunset soon, but we wanted to give you plenty of notice so you can truly enjoy your remaining time left in the game. We thank you for all of the memories we have made together in the Realms!

And so the end of Free Realms will be marked.

As for kids MMOs, Smed might have a point.  While Club Penguin still abides, and WebKinz continues to shift its model away from real world toys into virtual world goods, other online titles aimed at kids have faded as well.  Gone are Toontown Online, Pirates of the Caribbean Online, and Fusion Fall.  It isn’t an easy market and it competes with a lot of other entertainment options for kids.

And then there is free to play in general, which one of the original Free Realms team was talking about recently.

So today is the day.  And the clock keeps on ticking down for Vanguard and Wizardry Online.