The buzz around Kickstarter seems to ebb and flow.

When there is a Kickstarter going around something that gets you excited, it can seem like a great way for supports to get involved in a way that helps the development process.

And then there is the reality.

There was an article a couple months back (that I wish I could find) which reported the results of a study of Kickstarter projects and found that not only do most projects not get funded (which one would expect given the quality of a lot of the pitches), but that a large percentage of those that do fund subsequently fail to deliver anything (call it “take the money and run”), fail to get even close to their projected timeline (everything takes longer than you think), or deliver something that does not match what was promised in the initial pitch.

Now some of projects in the study seemed to be stuck in a category without considering mitigating factors.  The Steve Jackson Games O.G.R.E. Designer’s Edition project has been delayed because they asked for $20,000 and ended up with nearly a million, so they actually expanded the scope of the project so that the end result will be even better that they had initially planned.  But that has pushed out the timeline, so it appears on the “failure due to missed dates” list despite keeping backers fully appraised of the project status with regular updates.

(And I cannot emphasize how important updates are for such projects.)

In my own case, of the four projects I supported that actually made their funding goal (out of eight total) two appear to be stuck in the failed project timeline dimension.

Now, in one case, I know what is going on.  The Jason Scott documentary three pack, which I first mentioned way back in September of 2011, has been delayed because of his Internet Archive work and because he got paid to do another documentary ahead of the ones funded on Kickstarter.  I cannot say that the latter makes me very happy, but the documentary is being made available for free, so if you squint your eyes and look at things with your head turned sideways, it seems like maybe we’re getting a fourth documentary as part of the deal.  Plus the other three are under way and I consider them getting made to be more important than me getting my copies in a timely manner.

On the flip side, there is a book I helped fund that has gone to the editors and hasn’t been heard from since.  Such is life.

And then there is Planetary Annihilation, which I pitched in on because they invoked the name of Total Annihilation, one of two RTS games I still drag out and play to this day. (The other is Age of Empires: The Age of Kings, which I wish would get a screen resolution update and appear on Steam or GOG.com.)  But this project has no real set timeline and, frankly, I have been burned before by people invoking the TA lineage.  Supreme Commander was not at all satisfying to me, and so I stand ready to be disappointed again.

But amidst all of this “someday” level of hope, the fourth Kickstarter on my list delivered.  The new content for Defense Grid: The Awakening arrived last week.  As a supporter I already had my key and had access to pre-release versions of the new content, though I did not spend much time with them.  I wanted to experience them as finished product.

The product is now finished.

It showed up a little late.  The target was initially December.  But progress updates were frequent and if you entered the Steam key you got as a supporter, you could see the new levels evolving from raw layouts to fully formed encounters.  And once it was done, Steam updated you to the final version.

So I now have what I really wanted; more levels for my favorite tower defense game.

Appropriately enough, here is the first achievement for the Containment DLC for Defense Grid: The Awakening:

I am off to conquer the new levels in their various modes.

Now if Hidden Path can just get funding for their Defense Grid 2 project.  They did not reach that level of funding as part of their Kickstarter and so must seek the money via more traditional channels.

While I do not think Kickstarter is necessarily stealing money from 99 cent app developers, I do remain skeptical of a some of the stuff being offered up for financing.

Sure, some of the stuff is great.  It was all I could do to keep myself from throwing money at the Steve Jackson Games Ogre Designers Edition kickstarter.  I played Ogre and G.E.V. back when they were in zip-lock baggies at the hobby shop on the peg next to Snit’s Revenge.

Only the realization that I did not need another huge board game I would never play overcame nostalgia and stayed my hand.

But Steven Jackson Games is a known quantity to me.  I trust them to do what they say.  Likewise, I trust that Jason Scott will produce the three documentaries that I helped fun.  It would be way, way outside his behavior norms to not do so.

Other teams I remain less sure of.  Despite being a fan of the original Wasteland, I could not bring myself to toss money in for Wasteland 2.  I’ll be happy if it comes out.  I just don’t have any sort of way to evaluate the chances that team can pull it off or whether the game can make the transition directly from 1988 to 2014 and retain the same spirit.  Some games are only great within the constraints of their time frame and technology.

And I am waiting for the big crash, some big seven figure funding effort that fails to deliver.  It will happen.  You know it.

So my donations via Kickstarter are few and far between.  But today, thanks to Zubon, I have one I cannot resist.

Defense Grid: The Awakening is one of my all time favorite tower defense games.  It is simple, clever in a Valve sort of way, looks good, plays well, and has all manner of different modes to play and defeat once you make it through the main storyline.  My hours played for the game, as measured by Raptr, are at the MMO end of the spectrum.

Well, Hidden Path Entertainment, the makes of the game, want to make Defense Grid 2.  However, according to their tale of events, normal funding paths just are not panning out for the indie level profit margins.

So they have gone to Kickstarter.

They have thought this out.  They have four levels of goals ($250K, $500K, $750K, and 1 million dollars), each of which will yield up a different result.  They have the many levels of support, each with various and sundry cool things. 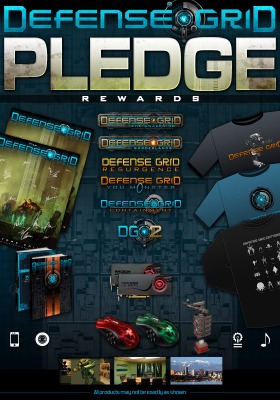 And they have a video with endorsement from other game developers.

But here is the key.  For the minimum pledge of $15 you get a key to unlock the original game on Steam.  It is a $20 game, and you get that.  And you get it the moment you pledge.  And you get to keep it even if they don’t fund.

So even if this turns out to be vaproware, you are ahead at the base pledge.

Plus, you get a copy of whatever software they end up being able to fund.  So if it succeeds, you get the new stuff too.

Of course, I would prefer that you go pledge more money.  I would really like to see this run off the end and fully fun.

Still, if you were thinking about getting the original game, go support it on Kickstarter.  You can have it now.

I have already pledged and have a code for the game.  Of course, I already own the game.  I will have to have a contest or something at some point to dispose of the code.  But after the Kickstarter funding closes.  That runs until August 14th.

Go check it out.