CNN.com doesn’t seem to be very clear on the subject.

They ran these two articles in their technology section, one on top of the other.

One says that the flying car was among this year’s best inventions, while the other wonders if another proposed vehicle is the first step toward a flying car.

And of course, neither of these seem to really be the flying car about which we dream.

We’re still sitting on the tarmac in one of these. 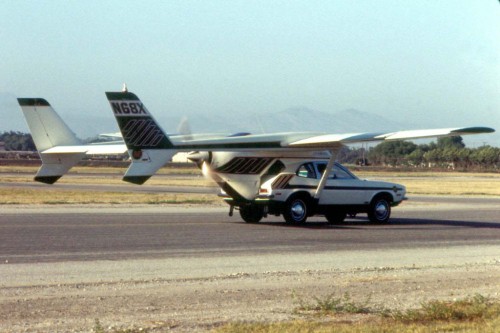 The quest for the flying car continues.

One of the quintessential promises of “the future” is the flying car.  It is the stuff of legend, George Jetson had one, Kevin Smith made a film short about them, Blade Runner featured them, and we all want one.

And every so often an item shows up in the new announcing a Flying Car has been created.

One such article showed up on Yahoo this past week about the Terrafugia Transition.  The headline was quite clear in calling it a flying car. 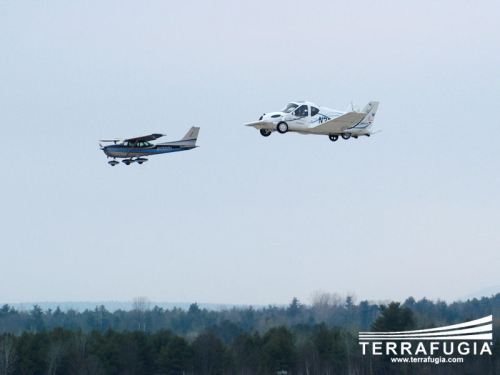 No, this is a yet another case of the press going for sensation and/or clearly not understanding what they are reporting.

What we have here is an airplane you can drive on public streets.  In the terminology of the manufacturer, a “roadable aircraft.”  There have been a number of such designs over the years, including one based on the Ford Pinto.

Pinto Readies for Take Off

The AVE Mizar flying Pinto was even the subject of a recent Air & Space article. (Photo above from here.)

And I am not down on the concept.  If you are a pilot, having a plane you can drive home and park in the garage is a significant benefit.  You could use it to commute via air without having to have multiple vehicles.  You can also bypass the cost of having to hanger the aircraft.

But this is not the flying car, so shame on the media yet again for using that term in your headlines.  I realize it is Summer, the slow news season, but still.

No, the flying car is something you or I could drive daily without requiring anything much more complicated than a drivers license.

Fortunately, NASA has been looking our for those of us futurists who long for the flying car.  They have defined some guidelines for a real flying car, or personal air vehicle, so we’ll know when we get there.  They have even funded some prize awards to stimulate research in that direction.

But today we’re still many miles away from the flying car.