A few items that I couldn’t really muster a full post… or much passion… about, but which I wanted to at least mention in passing so I could bring them up again in a year to see what happened.  That is one of my things.

EverQuest, What is Next?

I thought SOE must surely be trolling us.

I figured that they must have gone on some sort of bender after getting the MMORPG.com Best of Show Award at E3 with a game that almost nobody saw and which nobody can talk about. (Must be all the StoryBricks stuff, eh?)

Seemingly high and feeling cocky after those accolades, SOE announced that the final name for EverQuest Next would be… EverQuest Next!

Really?  Who was up watching TNG reruns at 3am and thought, “Hah, this will be great!”

But no, they seem serious. They have registered the domain and such.

When a project gets a code name and you use it a lot, it takes on a life of its own.  People within an organization will use internal code names for products for years after they shipped, much to the chagrin of marketing. (I have often been admonished by marketing over the years with phrases like, “Stop calling it that! That is not the name of the product!”)

Why not just go with what everybody is calling the product already, right?

But my own experience with many a badly named product makes me feel that, in the long term, sticking with EverQuest Next is going to be regretted.  To start with, what do you call the next game in the franchise?

Still, I went and made an EverQuest Next category for the blog.  I am sure we will be talking about it much more in the not-so-distant future, though I am trying not to pin artificial hopes and dreams on it quite yet.

Microsoft and Xbox One Policies

It was interesting to see how quickly Microsoft changed its mind on a number of the policies that made Sony so popular at E3.  Though, after the Adam Orth Twitter fiasco not too long ago, not to mention all the grumblings when this sort of thing was just rumors, one wonders why they needed to get that far in order to see the light.

Of course, some people are skeptical at this change of heart.  Microsoft isn’t as despised as Electronic Arts, but there are still trust issues.  I think that, for the most part, people don’t think Microsoft will shoot itself in the foot again on this issue any time soon.

So all that is left of the PlayStation 4 win at E3 is the $100 price premium for the Xbox One, which I suspect will become a non-issue in the absence of the other items.  The $100 gap seemed like a an obstacle when part of that list, but if that is all that stands between you and the next version Halo, it won’t seem like all that much.

More amusing to me though are the responses… of lack of responses… to this change of policy from some vocal individuals in the industry who were aggressively defending Microsoft’s initial plan.  One is already loudly proclaiming that consumer feedback had nothing at all to do with Microsoft’s retreat.  Keep on keeping on, man!

The Mammoth and The Art Department

There is a forum post up about revamping the industrial ships in EVE Online.  Industrials are the low end haulers that most players start out using. The plan is to try and give every ship of that class a viable role.

Not a bad idea.

Over the years CCP has added ships rather haphazardly at times, leaving some ships as second best at everything, so nobody bothers to fly them.  Lately CCP has been revisiting and revamping ship classes to try and create a place in the universe for everybody.  Last August it was mining barges.  Then it was frigates, then cruisers, then battlecruisers, and most recently battleships.

However, one of things mentioned in the industrial revamp post was a plan to swap the roles of two of the Minmatar haulers, the Mammoth and the Hoarder.  The Hoarder would become the largest capacity hauler while the Mammoth would be given some other task in life.

This was kind of a “WTF?” item in the middle of an otherwise sane… well, sane for CCP forum post in any case… discussion of a hauler revamp.  A lot of people out there, like myself, followed The Complete Miner’s Guide back in the day which recommended the Mammoth because it was the biggest hauler you could get into quickly.  The sausage-like Iteron V could haul more, but you needed Gallente Industrial V to fly it, which took more than a month to train.  The Mammoth could be yours in hours and, with further training and the right fit, could haul a jet can worth of ore, making it a nice fit for a miner.  The Mammoth became very popular. 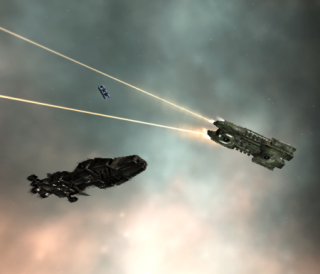 My Mammoth and Retriever – September 2007

So people wanted to know why CCP would want to make everybody who flew a Mammoth for its capacity trade it out for a Hoarder.

The answer that came back was that the art department did not like the Mammoth model for purely aesthetic reasons.  They wanted the Horder model to be the main Minmatar hauler.  This lead to a lot of “But, I love the way the Mammoth looks!” replies to the thread (a few Hoarder fans chimed in as well, and I must admit that ship isn’t as ugly as I recalled) along with the perhaps more logical “Why would you screw some people over for this trivial reason?” argument.

In the end, the art team apparently wasn’t that invested in the change and let it drop in the face of some forum noise.  Pick your battles and all that.

Art happy to allow us to leave the Mammoth as the largest hauler based on feedback. I feel kind of sad for the Hoarder, but oh well =)

Jester (twice) and Nosy Gamer (and now Funky Bacon) have relevant quotes, links, and discussions about this issue and the overall proposed industrial changes, if you are interested.

My world view is a lot less complex.  I like the Mammoth model and don’t really want to have to swap out three rigged Mammoths for no good reason.

On the other hand, it wouldn’t actually put me out that much if I had to.  So, whatever.

Today at E3 it was dueling presentations between Microsoft’s Xbox One and Sony’s PlayStation 4.

Microsoft went first.  I think this sums it up.

Remember that Sony had all day to soak in MS's presentation and KNOW they were about to destroy them. How good a day was that for them?

It is hard to come to a conclusion besides “Total Victory for Sony” at E3.

I am not in the market for a next generation console, but if I were I know which way I would be leaning.

Still, it is only June and the PlayStation 4 isn’t due out until the holiday season.  There is still time for Sony to follow its tradition of screwing something up with each console launch.

Meanwhile, I thought I heard somebody mention something called a “we-you” or some such.  It was hard to tell with Shigeru Miyamoto sobbing in the corner.

Also today, I went to GameStop. Me: "How do you guys feel about the Xbox One?" Store clerk: "We don't sell those anymore."

When it comes to the recently announced Xbox One, I am not the target audience, having no desire to get another gaming console.  That is all going to pass me by.  Gaming middle age and such.

But I have to admit, when it comes to naming,  I’m with that clerk.  Shouldn’t “one” be the first in line?  Isn’t that what we could reasonably call the original Xbox?

I get the all-in-one entertainment center symbolism and such, having paid at least a little attention to the announcement.  But still, you know some parent somewhere is going to disappoint their child by coming home with an original Xbox they got off Craig’s List for “really cheap.”

Sony will never has this problem with the PlayStation 4.