I write about old things here quite a bit.  Games, gear, memories, anything from the past.  And occasionally I will get as far back as the Apple ][+, which I think of as my first computer, trotting out this picture from 1983.  There is a story about getting it, because of course there is.

Apple II+ on Day One… nice digital watch on the left floppy drive!

Actually, I usually go with this picture from a couple months later because it has the joystick I ended up buying and a familiar game title on the screen.

In addition to the joystick I have stacked the drives in the more conventional manner of the time and there is the ubiquitous power supply cooling fan hanging off the left side of the case now.

Otherwise it is the same room, same curtains, same folding card table with the same cigarette burn in it somewhere under the computer.

But what if I pulled out this picture instead?

Oh Jesus what is this mess?

Same room, same curtains, same card table, but what the hell is going on there?

Seriously, if I hadn’t of run across this picture I might have completely blanked out this bit of my story.

For a brief period of time I had a Timex Sinclair 1000 computer, a derivative of the Sinclair ZX81.  And when I say “brief,” I mean about a month.

How did I end up with one?  It was a Black Friday purchase.

I’m not sure if we called the Friday after Thanksgiving “Black Friday” back in 1983, but it was clearly the first day of the of the Christmas shopping season still and the adds in the paper before then were full of deals, and one of them was for the Timex Sinclair 1000.  Payless Drugs had that listed in their ad for $99.  My grandmother, knowing I was pining for a computer, pointed this out to me.

Payless was a drug store, which meant it had a pharmacy and lot of general merchandise, but wasn’t quite a grocery store and wasn’t quite a hardware store.  The one by us had a large garden department and was the sort of place you could buy cheap patio furniture and beach umbrellas and a lot of stuff that didn’t quite fit into a some of the other “genres” of retail stores at the time.  They have since been bought by RiteAid, which with Walgreens (which now owns RiteAid), and CVS, make up the drug store triumvirate out in our area.

Anyway, computers and electronics were on the list of what they sold as well, which wasn’t all that odd.  I bought many of the games for my Atari 2600 at Longs Drugs, which had an electronics counter that also serviced watches and handled photo processing.  It was a different time.

My grandmother suggested I get out there and buy it, the whole thing being cheaper than the aforementioned Atari 2600 from five years before.

So I got out there early on Friday morning… not too early, the store opened at the normal hours and not at midnight or anything crazy because we were still civilized back then… and stood in line… because civilized or not we were still idiots and online shopping was decades away… until they opened the doors.

I walked over to the electronics counter, where they seemed to be in ample supply, and bought one… paid cash I’m pretty sure… and brought it back home.

What came in the box was the little black square with the membrane keyboard, a few of the cables, and a manual.  So I had to scrounge up an old B&W TV… kind of surprised there was one about, but there it is in the picture… in order to start doing anything.

There were a couple of test programs you could type in, but not much else, and you couldn’t save them.  When you turned off the unit everything went away.  You have to save everything to cassette tape, which explains why my old Sanyo dual deck boom box is on the table and wired up to the unit.  I am pretty sure that is the same unit I used to record this Dr. Demento tape. 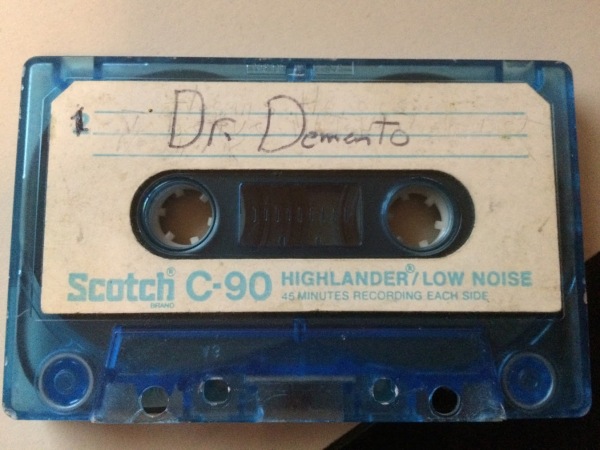 It was a less than ideal situation and I would estimate that I could save to tape and then subsequently successfully restore a program to the unit maybe 1 in 4 times.  That may have been related to a few factors, but I was working with what I had to hand.

I went out and bought a couple of magazines dedicated to the ZX81 which had some programs you could type in.  However, I quickly came up hard against the 1Kb memory limit.  So you can see a black box hanging off the back of it which contained an additional 16Kb of RAM so I had some space to work with.

I toiled away on the little machine for a couple weeks.  I will admit that I did like that the keyboard had all the BASIC operators on it, available via a function key, and I probably learned some rudimentary programming in having to type in literally everything by hand at least once.

The ZX81 magazines were, of course, full of additional hardware and upgrades you could add on to the little computer.  More RAM.  Full keyboards.  Real floppy drives.  Computer magazines were like that back then.  It was very much a hobby with all sorts of little companies supporting the ecosystem.  If somebody could wire something up and make it work they could sell it to somebody else.

And while I enjoyed imaging what I might add to the unit, when I got that check for Christmas a month later, my first action wasn’t to start ordering a bunch of stuff for it out of the back of magazines.  My first action was pretty much to arm sweep what I had off the folding table to make room for the Apple ][+.

It was honestly the right choice.  I was very happy with the Apple and have a lot of fond memories of my time with it.

As for what happened to the little Timex Sinclair 1000, I have no memory of that either.  It was an era when used computers and equipment had value.  I bought a few items from a used computer store down the road called Interstate Computer Bank.  But even in that era the little unit was below the threshold of having any resale value as it was.  It probably ended up in a landfill.