That company, Daybreak, which claims to have once been SOE, continues moving forward and doing things in a very un-SOE-like way.  In this case, Daybreak seems to be moving quickly ahead with the Time Locked Expansion server idea (which I am going to just call a Progression server, since I am not sure we need a new term for the same damn thing) for EverQuest II.

That is Daybreak’s graphic for the idea

Beta versions of such servers promised for early July, with July 7 being the target date… though we know how that works out sometimes.  I’ll go with “soon” until we get there.

Happy day!! We're preparing TWO Time-Locked Expansion Beta servers for #EQ2 in early July — one for PVE and one for PVP! Details soon ™!

The question remains though, what does this sort of server look like in an EverQuest II context?  We’ve seen three iterations of such servers on the EverQuest side of the house, in 2007, 2011, and most recently this past May with the Ragefire and Lockjaw servers, and each time such servers have been more popular than SOE anticipated.

I threw out a pile of ideas on how to differentiate such a server for EverQuest II about two weeks back, when the whole thing suddenly went from “unlikely” to “let’s do it!” over at Daybreak.

And that, to my mind, seems to be the key item; how will these servers be different that the live servers?  While just starting a fresh server seems like fun, given that they are also talking about server merges once they get this progression server thing going, that doesn’t seem like the best plan.  So what will they do to make these servers different?

Well, they put out an in-game poll which is live and in your mail box in post-cataclysm Norrath even as we speak.  Actually, two polls, one for the PvE server and one for the PvP.

In #EQ2, check your inbox! You should find two polls — one about our new PvP and PvE Time-Locked Expansions servers!

So, naturally I got on last night both to take the poll and to see what they were even considering for these servers.  I started with the PvE poll, since that is where my interest really sits.  I remain convinced that PvP has been nothing but a waste of resources and a distraction for SOE/Daybreak when it comes to EverQuest II.  I provide as evidence a list of all of the current EverQuest II PvP servers on the server status page:

Yeah, that many.  And yet they carry on.  All the gear in the game has two sets of stats, one for PvE and one for PvP.  With that in place, and Smed’s PvP focus, I am sure the sunk cost fallacy kicked in.  We’ll see how that works out.

Anyway, my personal bias aside, the poll is 12 questions long and opens with an easy question. 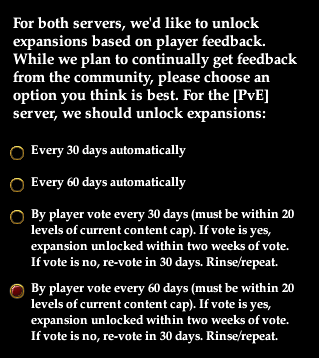 This one I found interesting, as at least it gave some indication as to the plan; they plan to gate the whole thing based on expansions.  I supposed we could have guessed that.

That said, I find this question somewhat unsatisfying as a plan indicator as well.  Like EverQuest, the EverQuest II base game starts off with a content set that ranges from level 1-50.  Even considering dumping the first expansion, Desert of Flames, and a 10 level increase in the cap in just 30 days seems silly.  They just got done launching the progression servers for EverQuest, where there will be six months between expansions for a while, but here 60 days appears to be the long straw.  With only 30 days between expansions, and only 10 actual expansions to work with (was Age of Discovery really an expansion?), I could easily be writing a post about how this server is completely unlocked and done a year from today.

But at least that question gave me something to think about and perhaps the most tangible indication of what the server might be so far.  From question 3 onward though, the cash shop takes over.  This is what I said the other day, when the cash shop pays the bills, you think a lot about the cash shop. 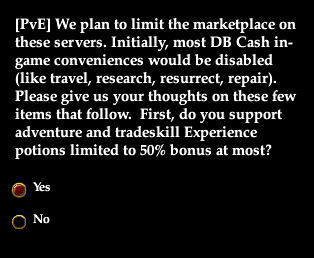 How big should the buff on experience potions be?  This strikes me as a question akin to the long standing joke, “Have you stopped beating… your meat?” as it presumes a state of affairs not necessarily in evidence.  What if I don’t want any experience potions on this server?

That does not seem to be an option.

Anyway, one answer seemed to be in favor of at least limiting their effect, so I went with that.  And given that they appear to want to throttle back the rate of level advancement on the server, I suppose experience potions might not be horrible.

From there we get into more yes/no questions on various cash shop items.

Vitality is what a WoW player would call “blue bar.”  It wasn’t in the game at launch, so I am against it.

Experience debt was in the game at launch, and at a pretty harsh rate.  I said yes to that just to give people a “get out of debt” option should things go really bad, since the plan seems to be to go back to the harsh old days according to the bullet point list at the bottom of this post.

Screw that!  Walk you lazy bums!  Or take the insta-travel bells that have been in-game since day one.  Travel is barely a thing in the game as it is these days.

I suppose there is no harm in that.  I’d hate to be the guild stuck with a typo in its name, especially since the Daybreak policy on guild problems is “Deal with it yourself!”  Seriously, if your guild leader drops off the face of the earth, the Daybreak suggested course of action, the last time I looked, was to make a new guild.

Sure, why not. [Caitlyn Jenner reference goes here.]

This one though… I guess I am a racist because I say no.

I actually came out on this very issue in my previously mentioned post.  There are lots of cool items in the base game and in each expansion to go with the cosmetic appearance system.  Use that not crap from the cash shop.

Oh lord no, and doubly so because SOE makes ugly, crap companion pets.  I’d rather have that 12 polygon gopher from WoW running around than be forced to see any of the current cash shop pets on this server.

I had to ponder this one.  My gut says that bags are an essential part of the player economy and that people ought to just go there for their storage space needs.  Hell, if this server will be the same as live and disregard the effects of weight, bags won’t even be a thing because we’ll all be walking around carrying  half a dozen giant bank boxes in our inventory.  (Can I get an artists representation of that please?)

On the flip side, storage is always an issue for a pack rat like me.  I have been lapsing a bit on my WoW garrison work lately, but I log in every day with my tailor to create more hexweave cloth to so he can make a 30-slot bag about once a week.

So more storage is a weak spot for me, so I voted for the maximum bag size.  I’d hate to be penniless in-game (since coin will be restricted), full up on crap in inventory, and sitting on all my Station Cash… or Daybreak Cash… and have no options.  Though, as I still predict that carpenters will be churning out bank boxes in huge quantities, so we’ll all have a ton of storage soon enough.

But there was also the PvP server poll to take!

I had to be honest on that one.  It is unlikely in the extreme that I would bother creating a character on a PvP server in EverQuest II.

But the PvP poll went on to actually ask some interesting and even substantial questions about how things should work, like the mechanics of betrayal and should there be a third faction and that sort of thing.  However, the formatting of most of the questions was screwed up, to the point of being unable to answer the questions.

They are going to fix the poll, but for the moment there is a work-around.

For the borked PvP in-game #EQ2 poll, a player reported that using Alt + Enter for each poll page straightened up the questions for voting.

I am mildly disappointed that the PvP poll got at least a couple more questions of substance than the PvE poll did.

Anyway, the polls are up and good through next Tuesday, though you have to have been a subscriber for the last 30 days in order to access it. (Good thing I signed up when the Ragefire beta started.)

About when the polls went up we also got some more details in the forums on what the progression server plan will be.

That looks to be very much in line with what I imagined it might be.  Subscribers only (though the beta will be public, so you can try before you buy), steeper experience curve, slower ground mounts, no giant pile of veteran’s rewards to fall back on, a restricted cash shop, and expansion related features mostly constrained to until the associated expansion shows up.  There is an additional bullet point list about AA points, level caps, and that sort of thing:

There is one disappointment though:

Content will be locked to classic EverQuest 2, starting areas will be Frostfang Sea and Darklight Wood. More on this later.

No return to the Isle of Refuge, which was the hallmark of the original game new player experience.  It isn’t that I do not like the Frostfang Sea… it is a good newbie solo starter zone (I don’t like Darklight Wood though)… but it isn’t the path from Qeynos or Freeport.  It is new content that bypasses the original content out to level 20 or so and is pretty much anti-group focused, as we learned back when we tried to run through it as a five person group.

But such servers tend to attract old hands and the nostalgia focused.  I suspect that a lot of people will start in the game, get a couple of levels, and then head to Freeport or Qeynos to go through the sewers, Antonica, and the Commonlands.

And how things are going to work out still seems to be in flux for the time being.

No word on locked encounters, though I hope those, and five minute buffs, are not making a return.