Okay, a past post may have explained my odd attraction to fishing in MMORPGs.  Or maybe it didn’t.  But if there is fishing in a game, I’ll be there.

On the Shadowmoon Valley shore

But fishing really only needs one character.    I generally pick somebody to be my fisherman and send them out to fish around the world, following whatever plans the game happens to have for the vocation.

Something on the hook

In World of Warcraft though my alts end up fishing as well.

Maybe not all of them.  I draw the line at different servers and there are a couple of low level characters I rolled up for a specific reason that I have since ignored.  But alts I actually play tend to have their fishing skill raised up past 75.

The reason is Darkmoone Faire.

Darkmoon Faire rolls around once a month in Azeroth, starting on the first Sunday of each month and running for a week.  And every month it comes by I am there in Elwynn Forest to join in on the fun… or whatever it is that one calls the activities at the faire.

The faire has been around forever, at least in the reckoning of the years of Azeroth.  It used to pop up in different locations and its portal even made appearances outside of Shattrath in Outland, back when people used to be there.  But I was never really much for the faire back then.  It wasn’t until Cataclysm that I started visiting regularly.

It was during that time frame that the faire adopted its more regular monthly schedule, with portals outside of Stormwind and Thunder Bluff, so it was much easier to find.  And, of course, Cataclysm was also a dark time in WoW for the instance group.  We found the expansion unsatisfying and the rework of the old world distressing, so left for other pastures before too long.

Well, most of us did.  I went in on that deal where I subscribed to WoW for a year to get my copy of Diablo III, so I was stuck with paid time on the game (and Blizz wouldn’t even let me turn off auto-renewal despite having paid in advance).

I wasn’t playing a lot during that time, but every month I would roll into Darkmoon Faire with my main and then a growing number of alts.  It started as a way to slowly advance the trade skills I was otherwise not using.  With every fair there is a quest for each profession that you can run once which advances you 5 skill points.  That is not a lot, but it is something… and it is often something that can get you past a dry spot in the profession progress curve.

Of course, fishing is a profession, but I wasn’t all in on that quite yet.

Through the parallel progress of a pile of alts, each earning some tickets with every passing faire, I have been able to accumulate almost all of the heirloom armor available (as well as upgrading all I have from level 60 to 90), all of the pets, and most of the mounts.  I am currently saving up for the Darkmoon dirigible mount, which came in with patch 7.3, and which costs 1,000 prize tickets.  That might take me a while.

Since the acquisition of prize tickets became a goal, I expanded to get fishing going on my alts, since that was one of the professions for which a quest was available.  It did require me to get each alt up past the skill level of 75, into the second tier of the profession, which you have to do to be able to take the quest.  But once there each alt that visits the faire spends a few minutes down at the dock fishing up the required catch to add some additional tickets to their monthly take.

My hunter down at the end of the faire

Of course, the faire has other attractions.  Knowing the faire was coming I saved up some of my WoW Legion faction upgrade tokens.  If you ride the merry-go-round at the fair it boosts experience and faction gains by 10%. 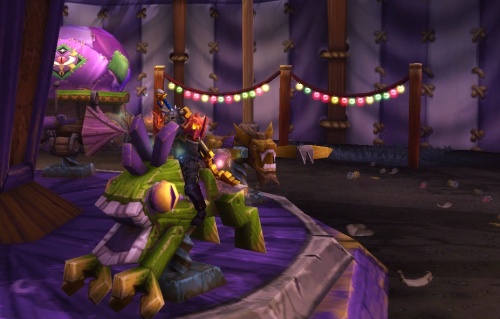 Riding for a faction boost!

That isn’t a huge boost, but when you are sitting on a bunch of tokens it can make a difference.

Anyway, I mention this because Darkmoon Faire is here again this week and I and my alts will be showing up to visit, to boost our professional training a bit, to collect more prize tickets, to do the pet battles, and to fish.