Battleships have always held a fascination for me.

Certainly as a young boy, seeing pictures and drawings of battleships bristling with armament left an impression. 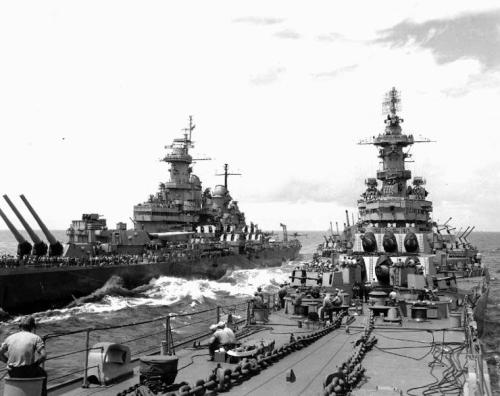 But things martial do tend to attract young boys.

Tanks, airplanes, and battleships all figured heavily in my childhood play, day dreams, and drawings. (Something actively discouraged by most female relatives of mine, yet subtly encouraged by nearly every male relative.  You see how this works.)

And while I might consider myself having missed the golden ages of tanks or airplanes, they still exist and have continued to evolve during my lifetime, if more slowly than before. (The US Air Force flies planes built before I was born and plans to keep flying some of them until after the actuarial tables say I am likely to have passed on.)

But I was born after the age of battleships.

The US Navy maintained a few during my lifetime.  One is parked, in storage, about an hours drive from my home.  It is waiting to be turned into a museum.

Fleets of steel clad battleships though, that idea faded as a strategic force nearly a century back, and even then the battleship concept was never really put to the test.  The list of battles involving battleship forces is relatively short, and the more decisive engagements tend to reflect either mis-match forces or leadership.

On that list there is the one battle that represented the clash of mass naval forces, matched in size, quality, and leadership in the style foreseen by the naval powers of the time: Jutland.

And that pretty much ended up a draw, with both sides claiming victory and pretty much returning to the same state of affairs as before the battle.

So if you study history and want to compare equipment and tactics you are at something of a loss when it comes to battleships.

With tanks you have the western desert and the eastern front.  For aircraft you have pretty much the whole European theater to study.  Battles between aircraft carriers dominated the war in the Pacific.

But for battleships fighting as their creators envisioned, you have Jutland, a battle that spawned many theories but decisions.

Part of this is because the era of the modern battleship was so short, lasting from the late 19th century to the end of World War I and the coming of the aircraft carrier.  Compare this to the age of sail, which ran from the mid 16th century up to the ironclads of the US Civil War and contains a long list of battles to study and compare.

And, likewise, there have been a number of good games representing the age of sail, full of broadsides and laying along side to board.  The actual ship to ship combat was a high point of Pirates of the Burning Sea, which I felt hit very close to the mark in the balance between realism and playability.  Pity about the rest of the game.

And, of course, there is plenty of supporting literature to put you in the mood for wooden ships.  I’ve been through all of Patrick O’Brian and most of C. S. Forester‘s tales, all of which I highly recommend.

So when Wargaming.net announced World of Battleships (see, I’m closing in on an actual point here… somewhere) I started thinking about games I’ve played, or at least seen, involving that narrow span of time when battleships ruled the waves.  And they all seem to center around one battle.

I remember being up at The Outpost, a hobby and game store up in San Carlos, and watching very earnest men moving tiny lead models of ships around on a very large felt-covered table, measuring distances and consulting tables and charts, in order to simulate the clash of forces at Jutland.

I recall playing Avalon Hill game Jutland with a friend in a room that quickly turned out to be too small for the effort.  Plus the measurements and accounting took patience we barely possessed, and there was the danger of pets and siblings messing things up.  But the alternatives were more like AH’s War at Sea, which pulled back for a more strategic view and gave little feel for ship combat except in a very abstract sense.

I had Victory in the Pacific as well...

And neither option lived up to Wooden Ships & Iron Men.

More recently I tried out Storm Eagle Studios’ game called, naturally, Jutland.  Imagine that.  It is a 3D modeled simulation of naval combat in the age of the “modern” battleship.  And while it suffered from some of the interface maladies that tend to come with war games from smaller studios (along with some annoying copy protection for just the demo), I probably could have dealt with that had it not been for the scale of combat, something hinted at in the previous two memories.

Getting the camera hauled around to the point where I could see at least a squadron of my ships in some detail meant not being able to see the enemy except as specks on the horizon, or the rest of my own fleet, which was likewise tiny bumps on the ocean surface.

The thing that always comes back to slap me in the face is that, compared to the age of sail, combat with 20th century battleships takes place at pretty extreme ranges.  When the heavy guns of a fleet range out from 20-35km, there is no laying along side or yardarm to yardarm broadsides.

And while battleships are big, that sort of range makes them seem pretty small all the same.  I have seen the USS Iowa from the highway as we drove past Suisun Bay.  It was certainly less than 5 miles away, and it seems unimpressively small at that distance, despite being nearly 900 feet in length.

Which makes me wonder how Wargaming.net plans to address this.

As I said about World of Warplanes, the sky is big and it needs to be because WWII aircraft move fast.  They have said they plan for a 13km by 13km airspace in which to fight 15 vs. 15 battles. (Which seems small to me, but we’ll see.)

For battleships the ocean is big and it needs to be, not because they move fast (the best can scoot along at about the same rate of speed as the fastest tank in World of Tanks), but because their guns can reach out and hit just about anything they can see.  A flat 13km by 13km square of ocean would be a battleship bloodbath.

Given Wargaming.net’s past game plan, which is quick 15 vs. 15 battles where combat commences very rapidly, I am trying to figure out how they will fit this into the same plan.

If you start everybody too close to speed things up, it is aim, shoot, and over.

If you go for smaller ships, destroyers or cruisers, it then ceases to be World of Battleships.

If you lay things out in real world distances, with the sides out of sight of each other, the match takes a long, long time.

So how do you make a game that involves quick(-ish) action, keeps to a reasonable scale, and yet does not throw realism completely out the porthole?

Tanks were easy.  Warplanes at least have antecedents in things like Air Warrior.  But battleships?

I suppose we will have to wait and see.